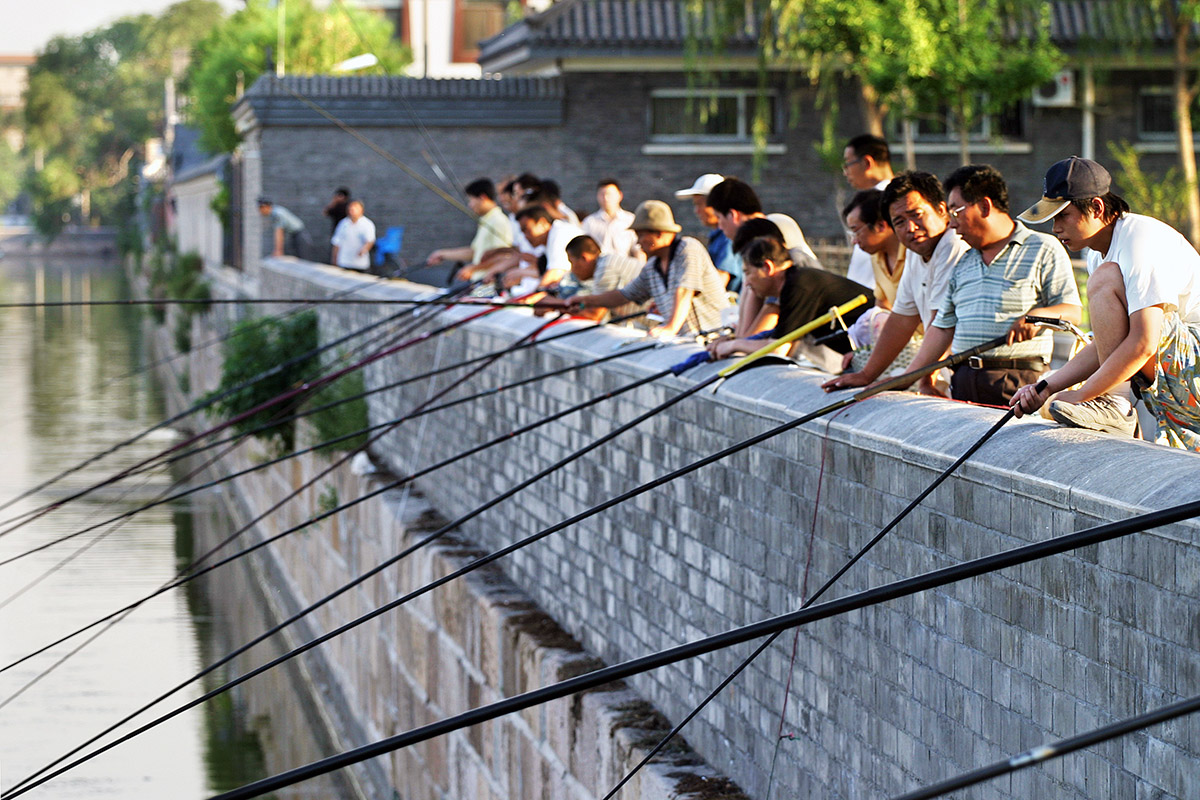 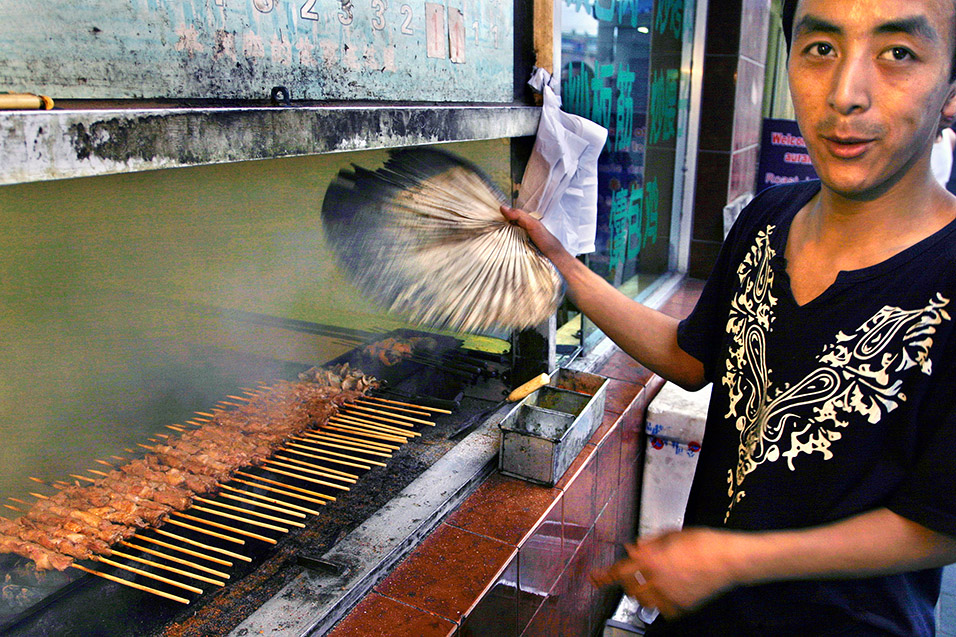 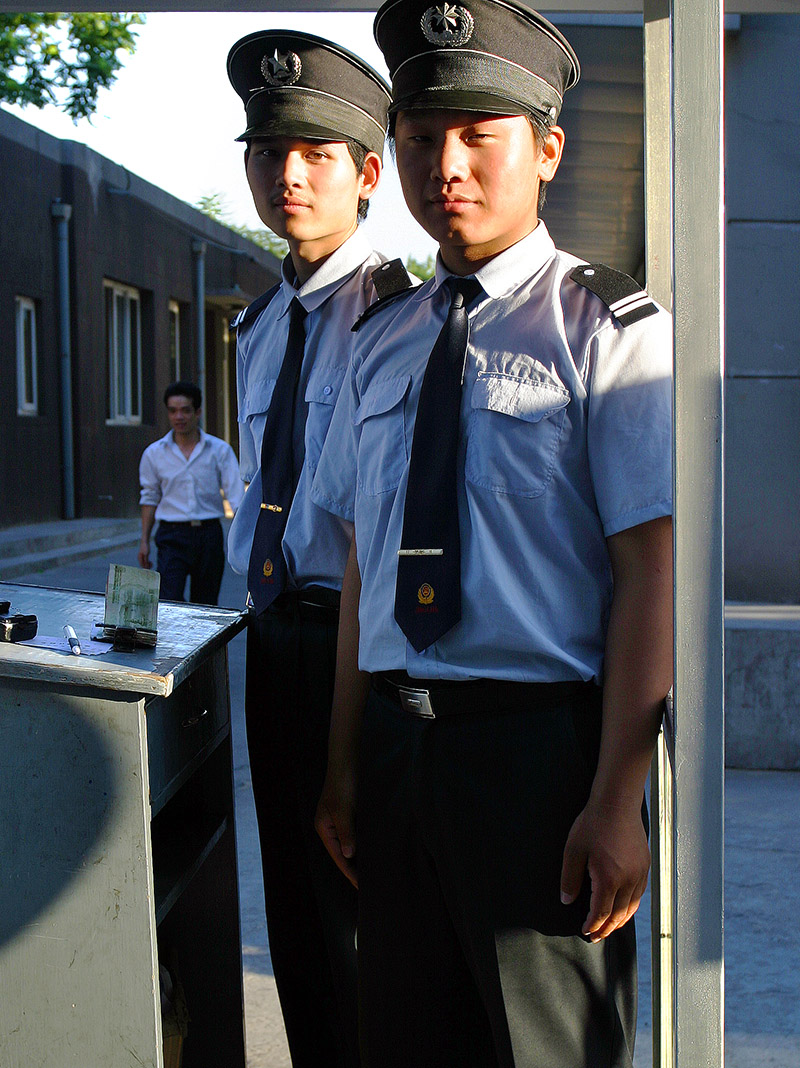 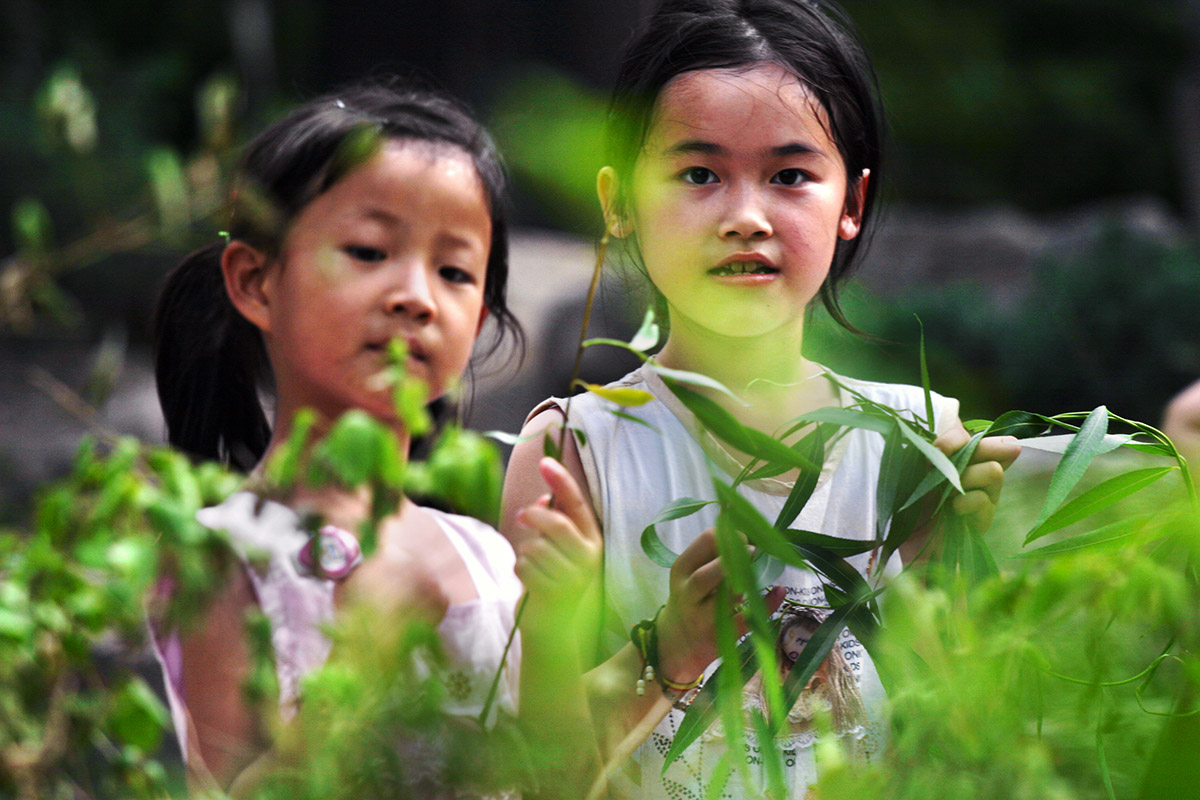 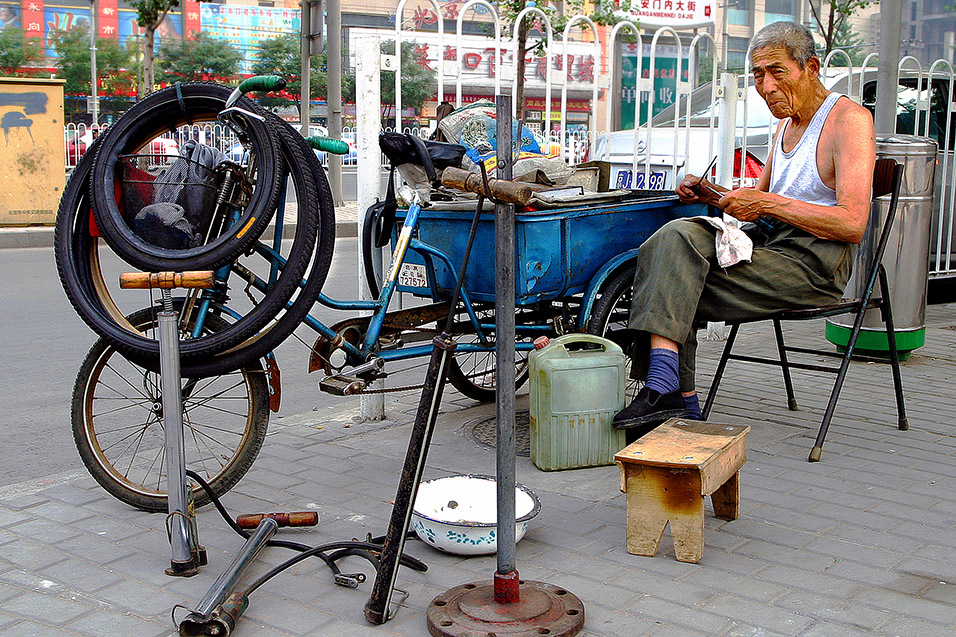 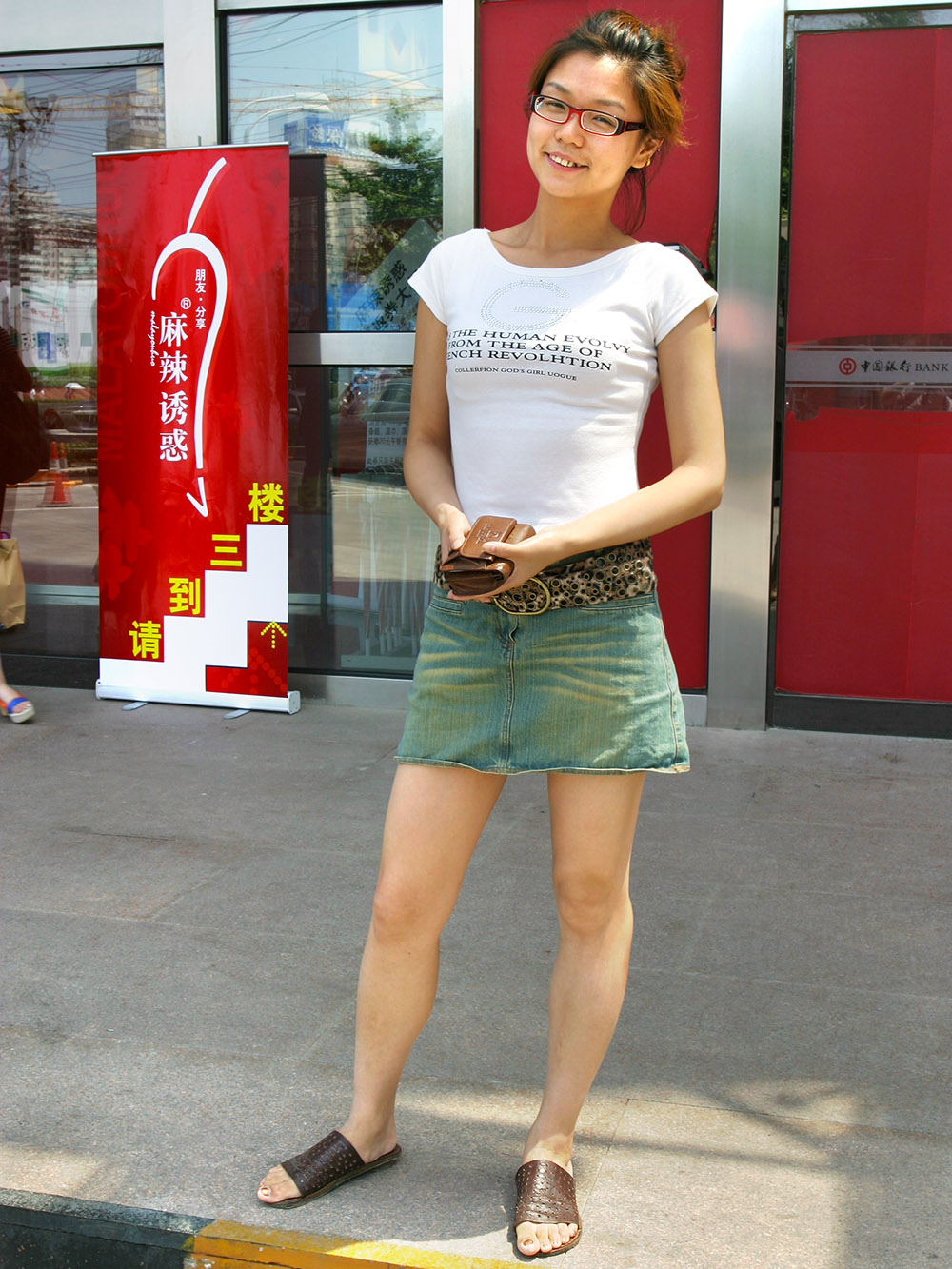 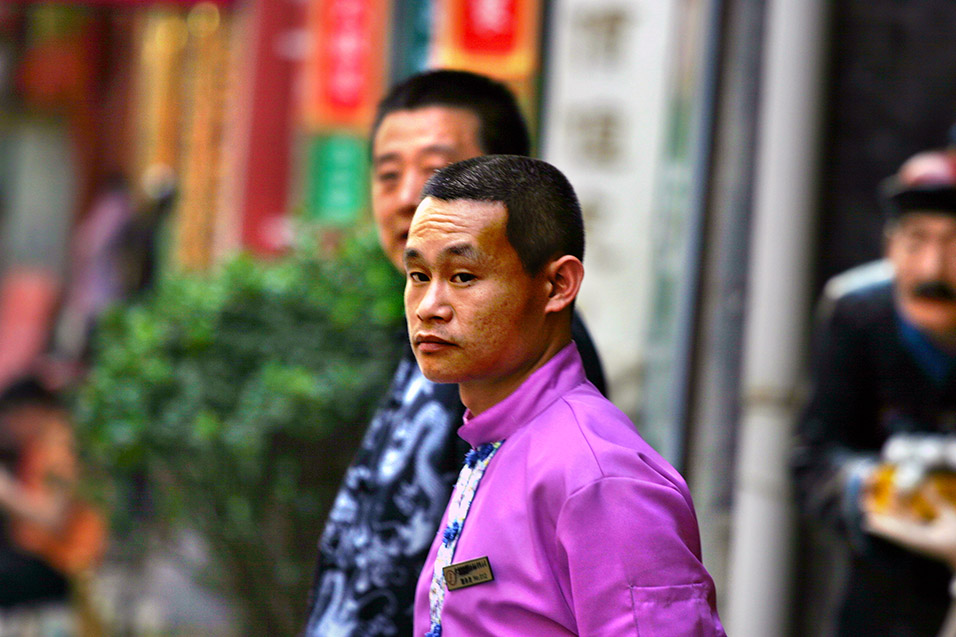 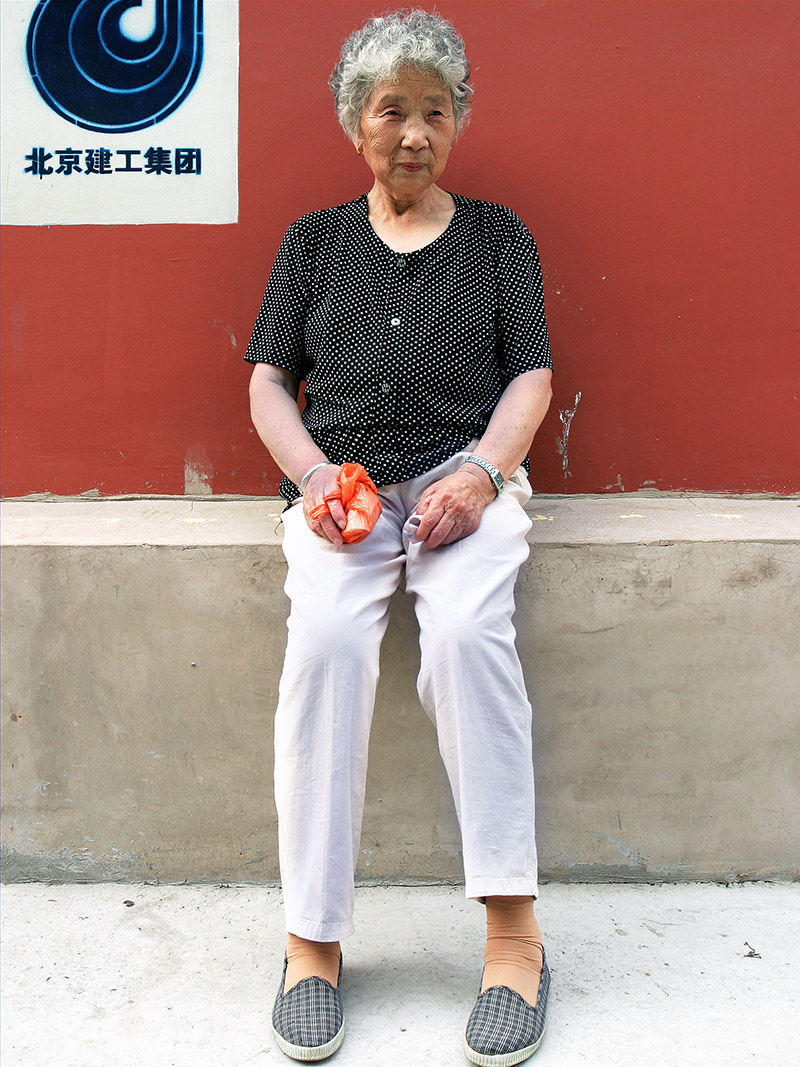 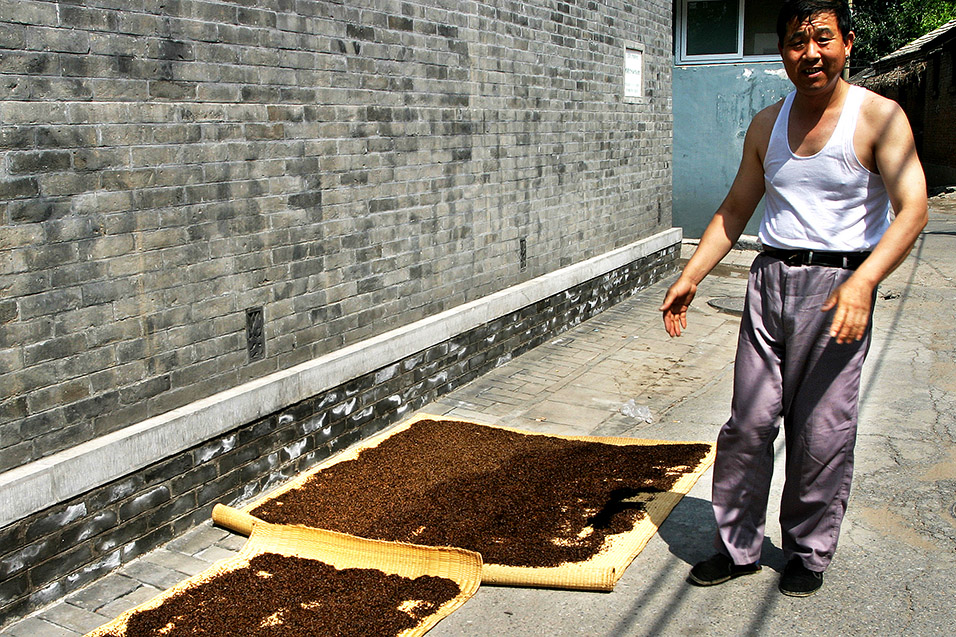 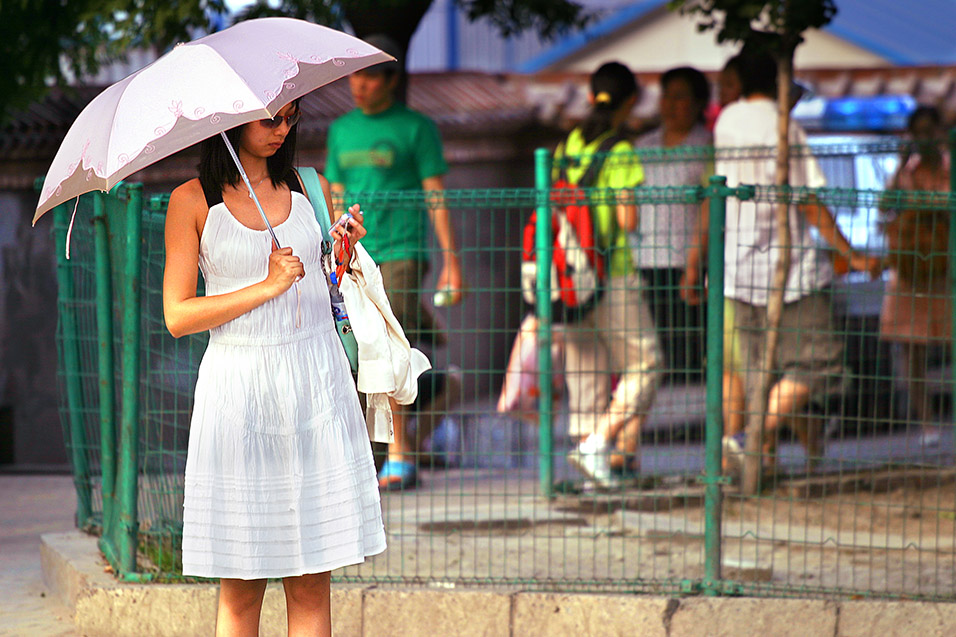 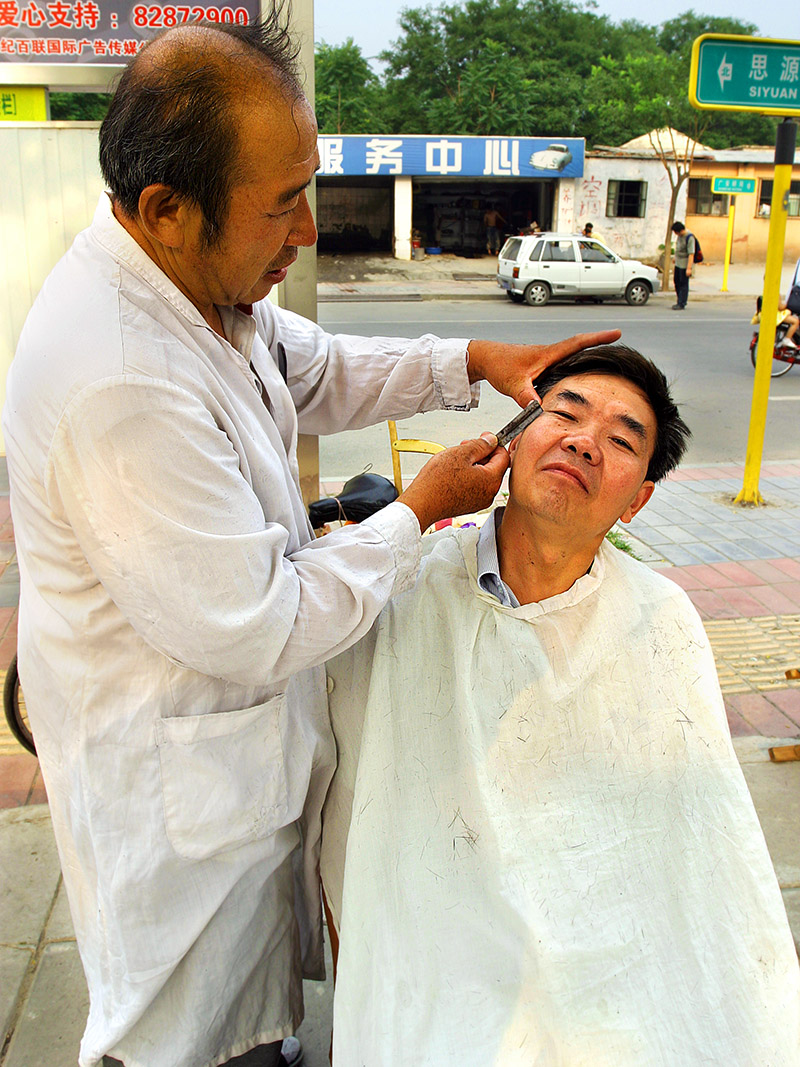 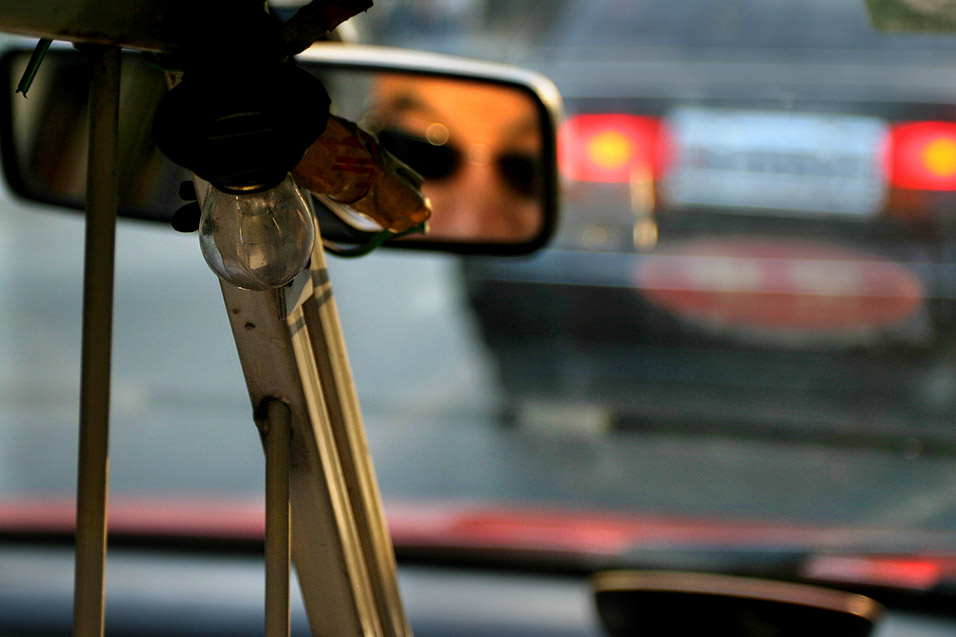 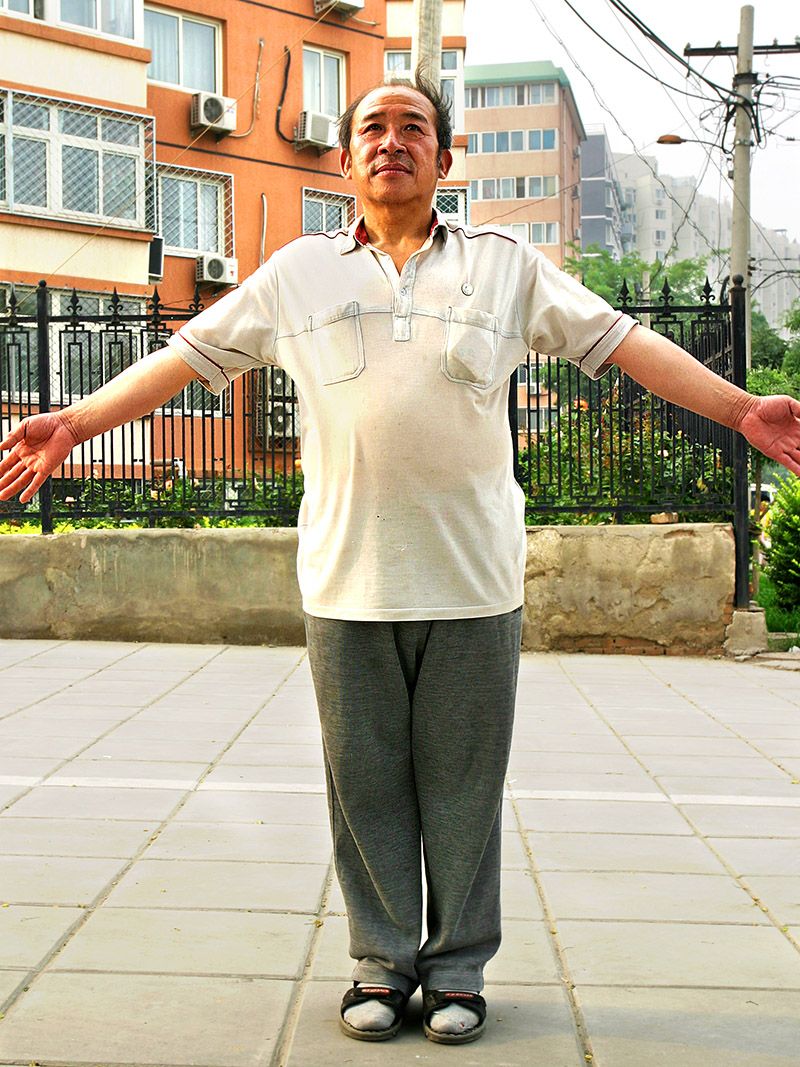 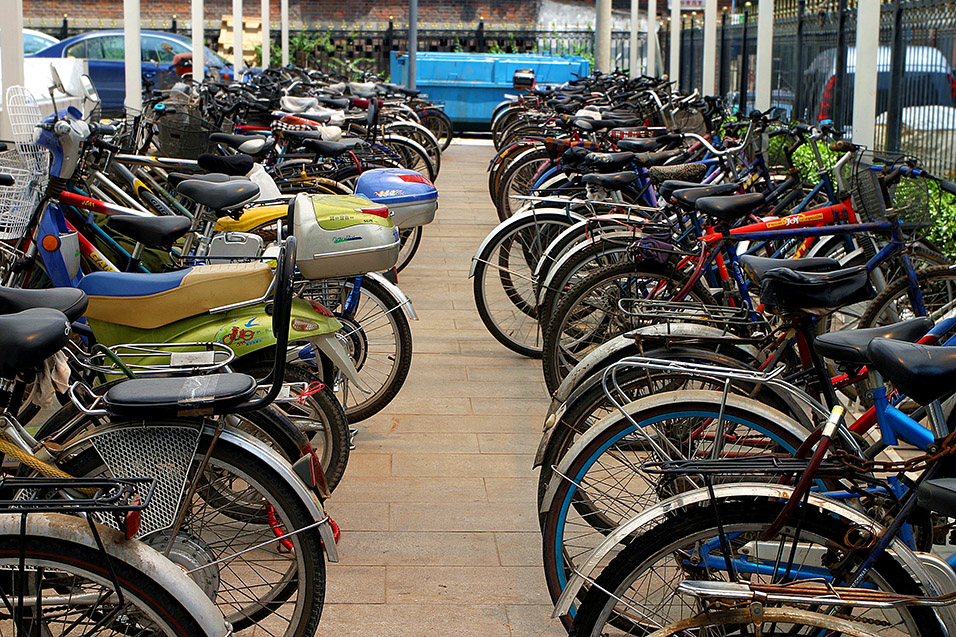 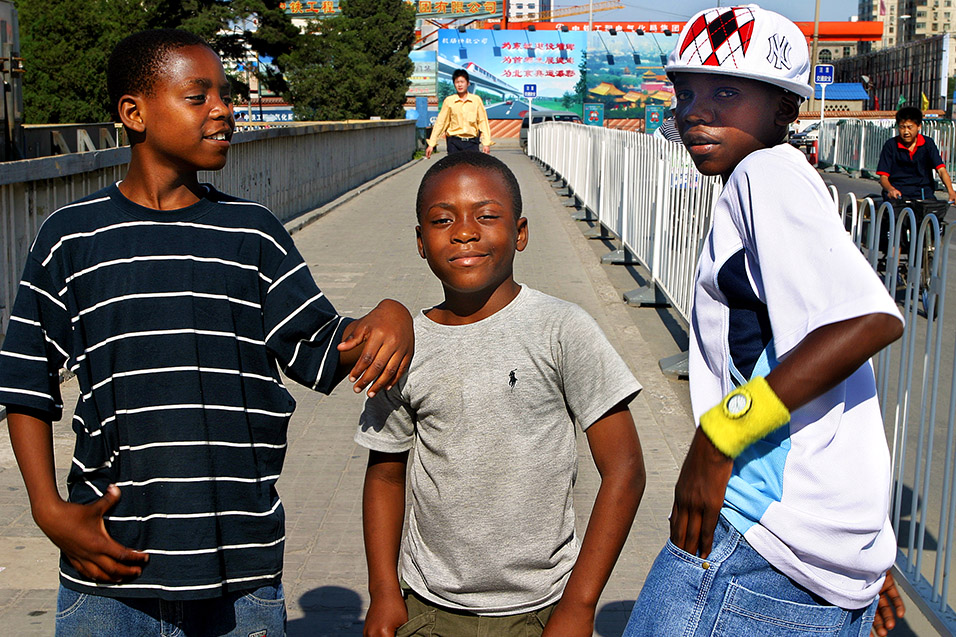 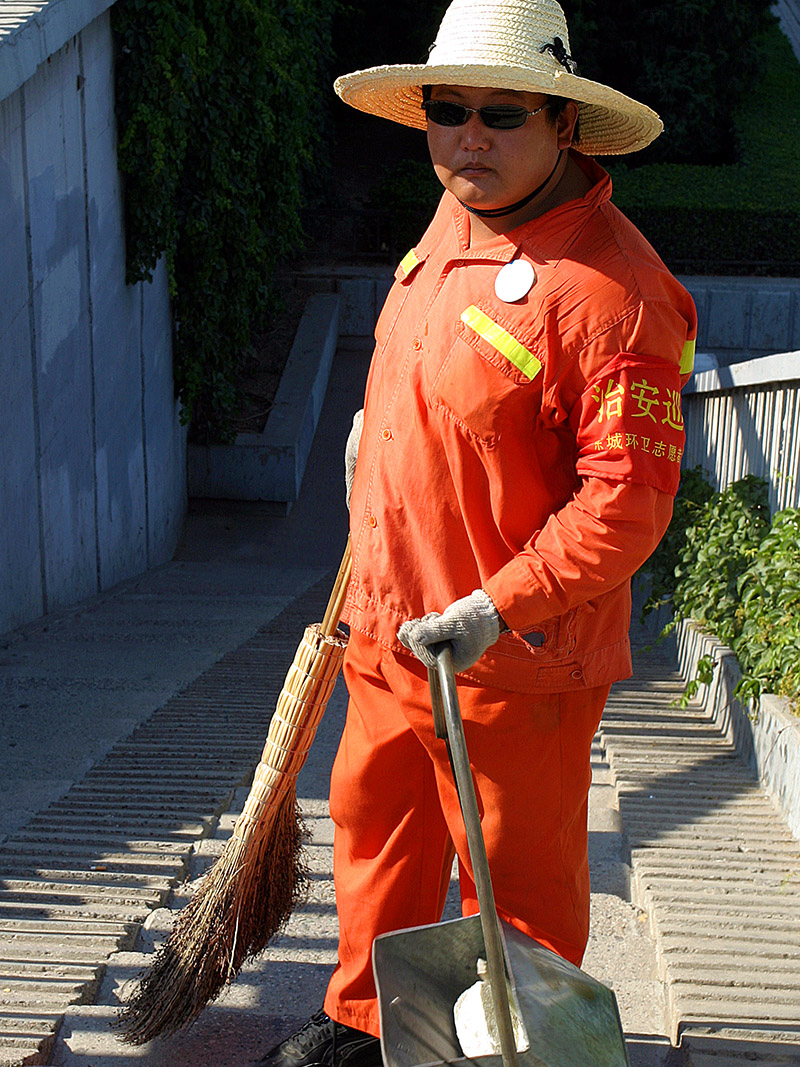 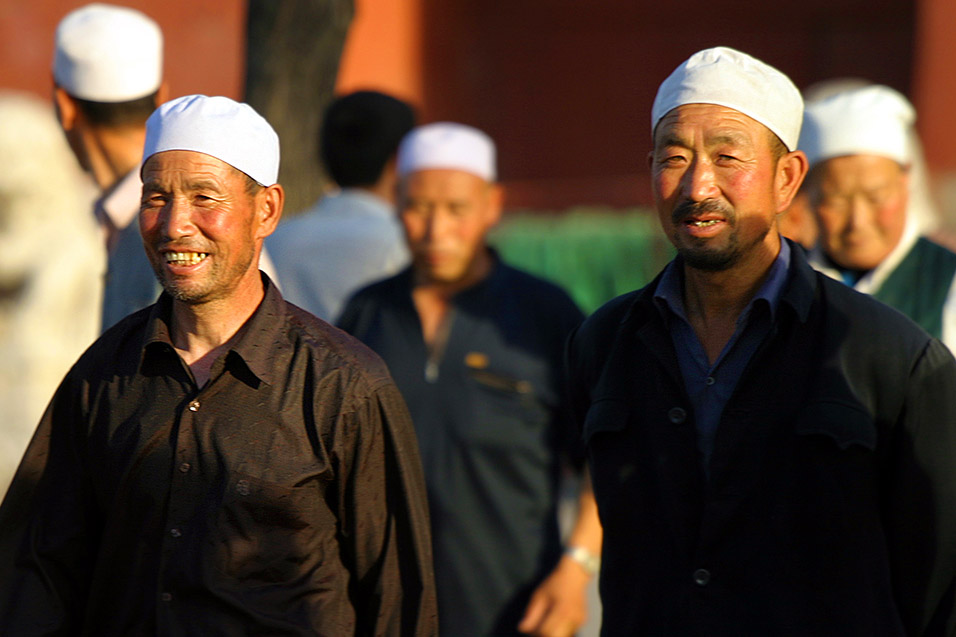 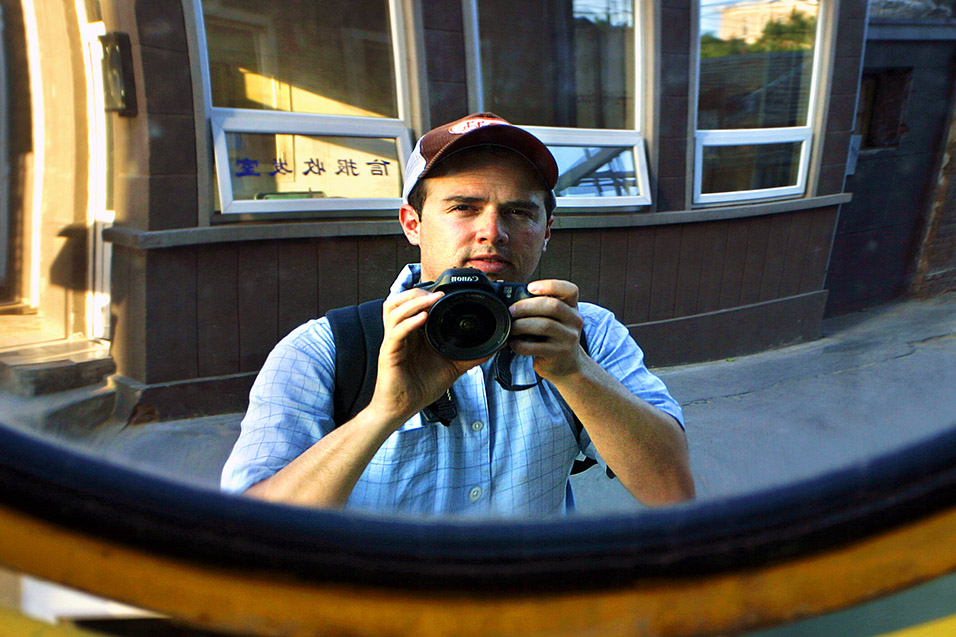 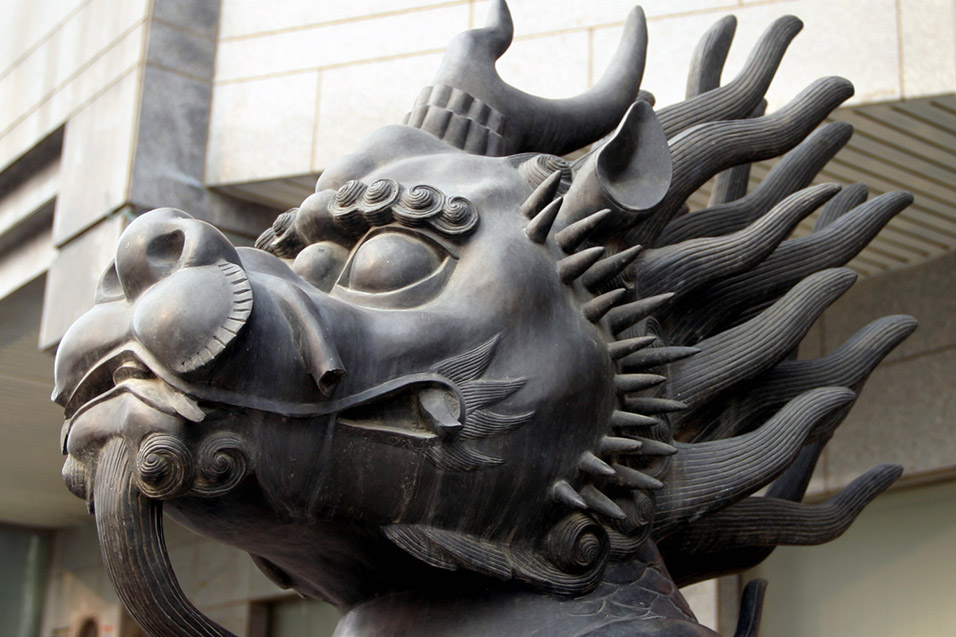 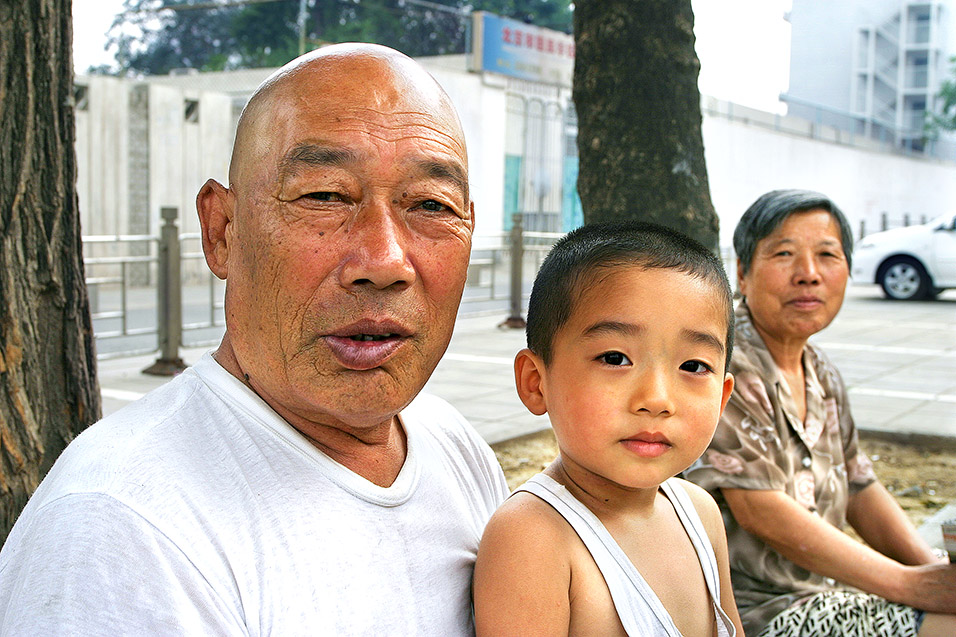 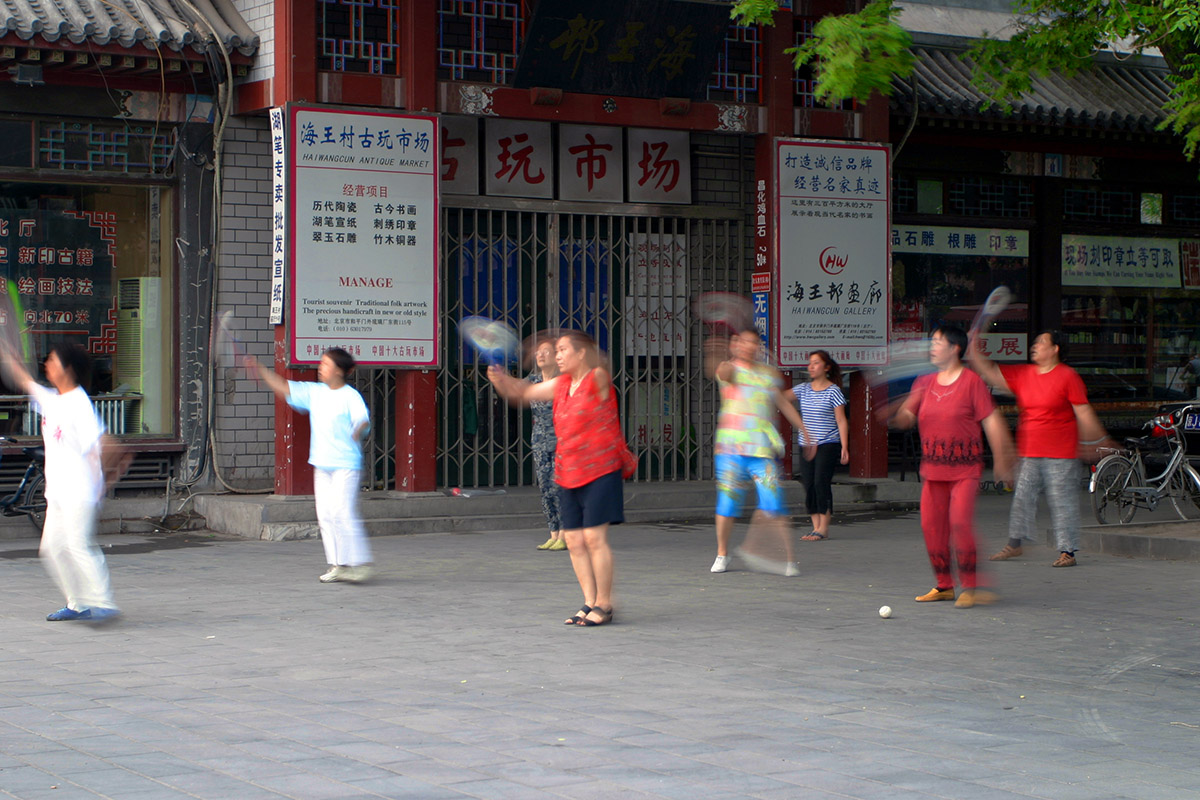 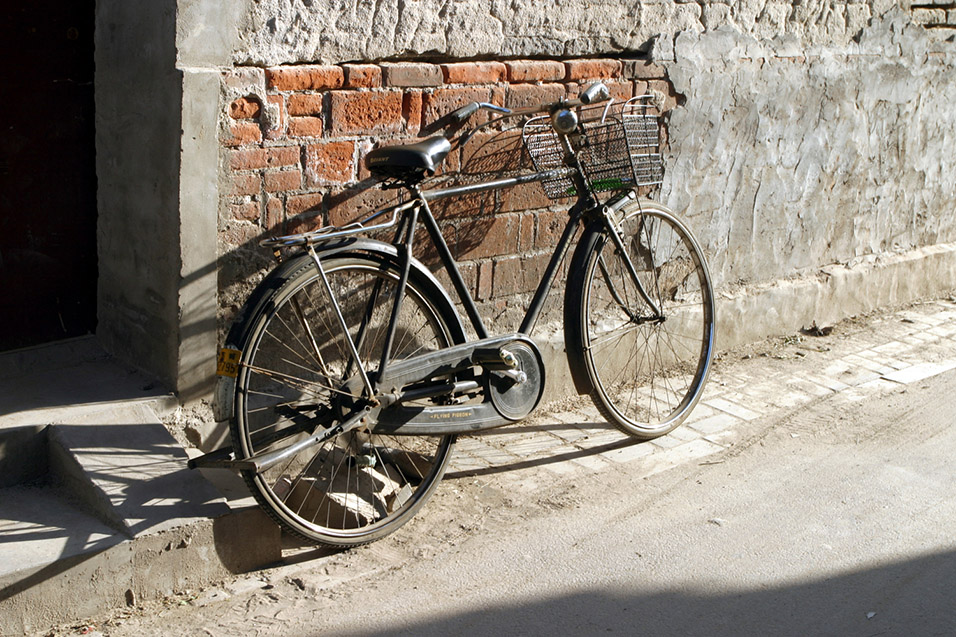 The bike I used to photograph all of these pics, Běijīng, China — July 2006 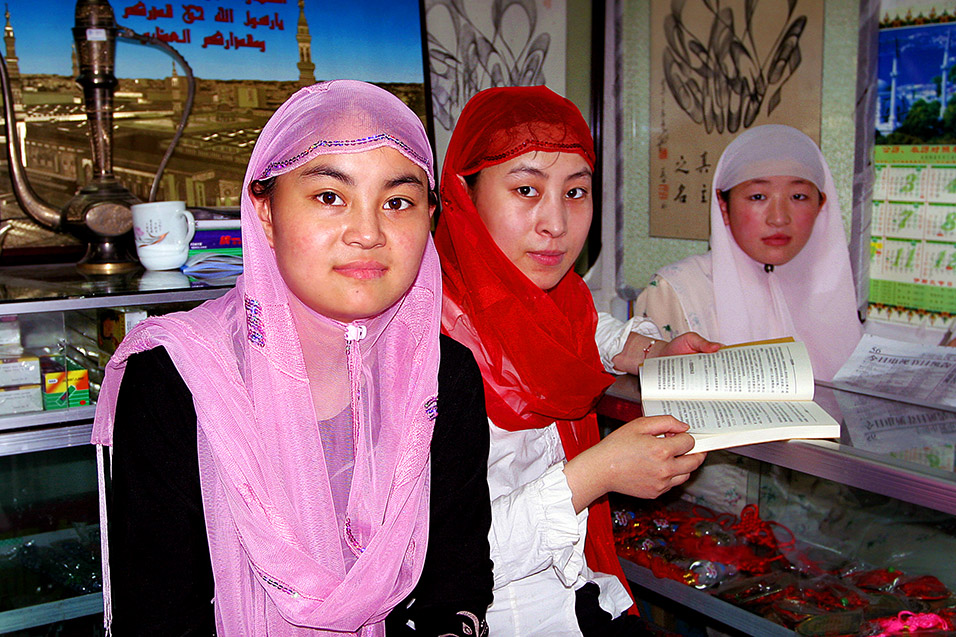 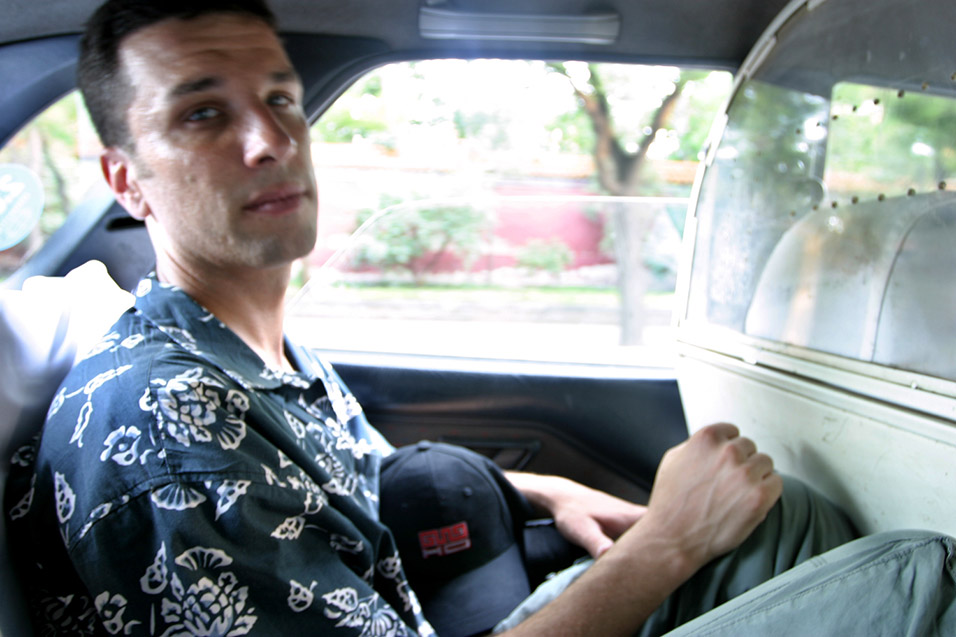 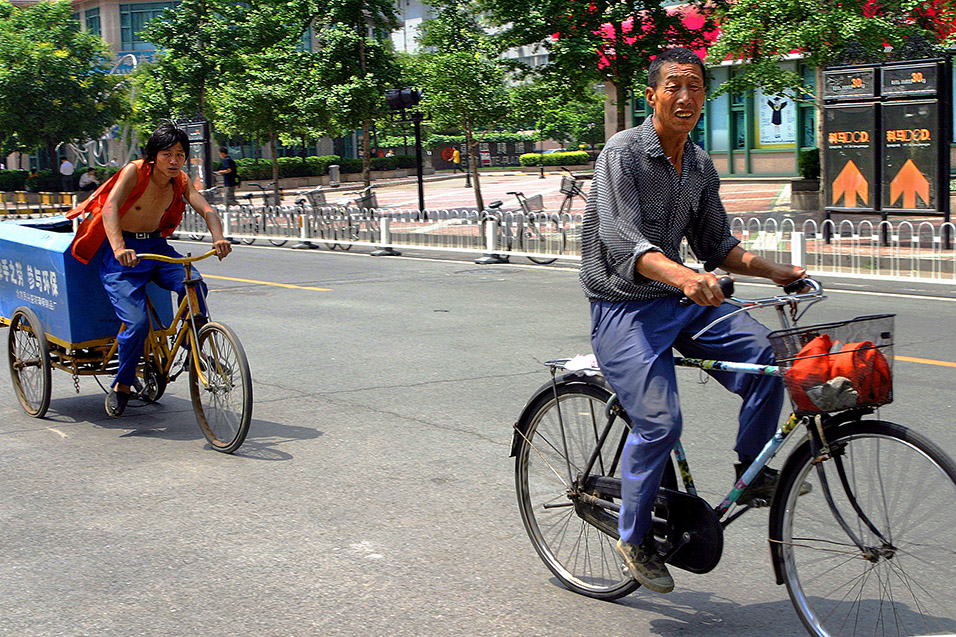 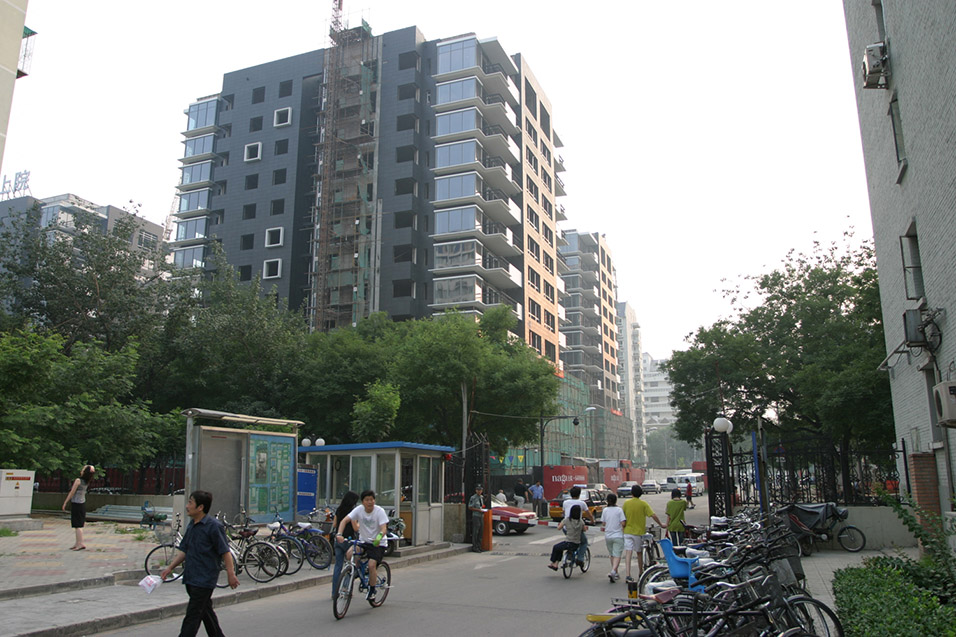 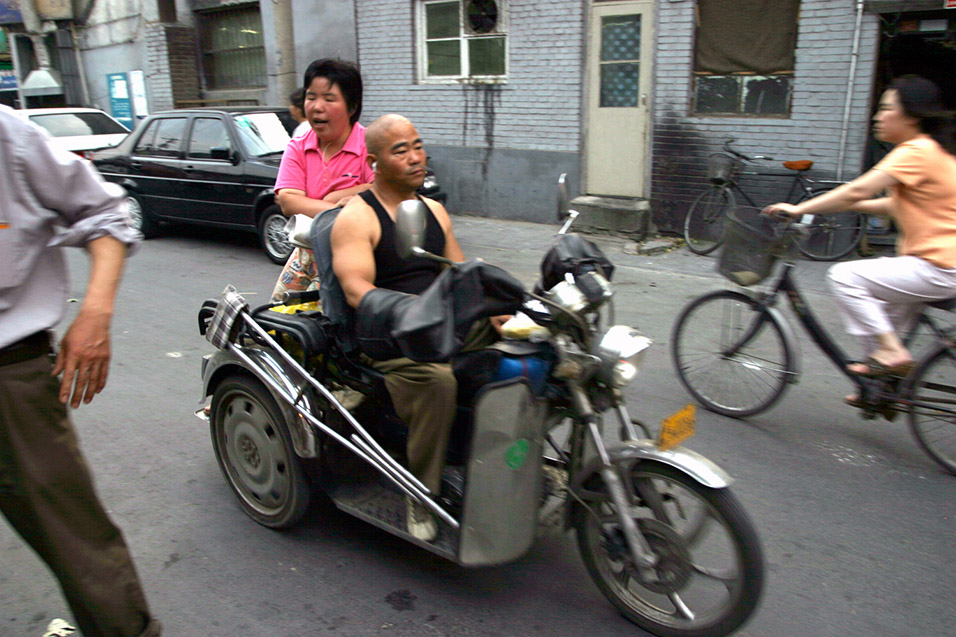 With summer upon us and my contact job at ING over, I hopped an Air China plane to Běijīng for a quick 2-month stint in Zhong Guo, as the Chinese call it, or translated literally, the Middle Kingdom. Last time I was in Běijīng was a mere 18 months ago, yet the changes were remarkable. Olympic fever has taken over, and now Běijīng is the new construction capital of the world. Hi-cranes and cement trucks were everywhere, scrambling to get the capital ready for the massive sporting event in 2008. I decided to visit my favorite dumpling place and my bike rental place, but there were gone. In fact, the entire block was gone, replaced by one massive construction pit. Luckily, a lot of traditional Běijīng exists, and once a found a bike I could cruise for hours in ancient hútòng 胡同 alleyways passed old men playing cards, as the always have done, passed young children playing around, as they have always done, and passed the ubiquitous Pekinese, the typical small whitish, funny looking dog that 1 in 3 Běijīng people own.

World Cup was underway when I arrived to Běijīng and the local bars set up massive projection screens on their grass lawns and patios. My local friends in Běijīng (Luke, et al.) spent many hours sitting under the stars, and trees, and screaming cecedas, watching teams from around the world trying to score that one vital goal. I love the damn game and I wish it would be more popular in the US.

Saturday, July 8 — Beyond the wall

I have had a fascination with the Great Wall of China since I was eight. At the time, my parents returned from their trip to China and plastered my room with a panorama of Badaling, the most famous portion of the wall. My dad told me the wall went on forever. Did I hear what he said? Is there really a wall that goes on forever? You can only imagine what goes through the mind of a little boy when he learns there is a wall that goes on forever. My head was spinning and I had to get there somehow.

When I turned nine, thinking a trip to China would be cheaper than the Tyco race tracks all the other kids were getting, I thought I would do my folks a favor and simply ask for a trip to China. My mom just smiled but still got me the race track. I never got good at racing those little plastic cars around the track . The wall would have to wait.

I finally make it to the Great Wall in 2001, during a triumpant trek to Huanghuacheng, the wild wall. I visit twice in 2004, and during this trip, I climb the wall for my forth and fifth time. On both occasionas, as I walk along the ancient ramparts, I think about the wall. Its intent was to detour the Mongols and, particularly, their conquest under Genghis Khan, aka Chinggis Khaan, as he is locally known. But up until this point, I never think much about what lay beyond the wall. What is there? What are the people like today?

Ironically, a few days back, I learn it is the 800 anniversary of the coming to power of Genghis Khan. A large Naadam festival will take place, featuring tradiontal horse riding, archery and wrestling. The timing seems perfect. I decide to take a deeper look beyond the wall to meet the descendants of the people who motivated the Chinese to build one of the most marvelous tourist attractions on Earth.

Figuring out how to get to Mongolia from Beijing is a different story. I am not going to fly as overland travel, in my current social circle, is the hip way to move from point A to B. I email several travel agents.

“All tickets sold out 2 months before already.” is the response from my most promising contact, Richard Tian from Ocean Travel. Other replies follow suit and I am out of luck until I find a small advert by Discover Mongolia.

I call the number, make a reservation for the evening, and taxi to the Beijiao Long-Distance Bus Station 北郊长途汽车站. I board a sleeping bus and am ushered to the back of the bus to the pit, a large platform above the engine, that can sleep six sleepy souls. Interestingly, everyone in the back of the bus is a foreigner like me. We bond instantly. The bus leaves at 5:30pm and heads northwest to Erlian. We swap stories, eat snacks and drink beers. It is a fun and unique Saturday evening.

We arrive to Erlian around 5:00am. We unload and wait by a minibus. The drivers tells us we have to wait several hours. I walk around town and snap some morning photography.

Around noon we load in to the minibus and drive toward the China–Mongolia border. On the way, I take a picture of a gas station and we are soon pulled over by the police. They saw me take the photo and say I am too close to the border to take pictures. The driver pays the police 100 kuài. We cross the border, pass immigration and continue into Monolia. The landscape quickly changes to desert. We are dropped off at the Zamyn-Üüd train station and scramble to get train sleeper tickets to Ulaanbaatar. The lines are long and slow.

We arrived on the train from Mongolia and I tour Hohot for the day. I remember taking a ferris while ride and visiting a McDonalds, only for the reason that the McDonalds font was written in the vertical Mongolian font, a very unique sign.

I I transfer from Hohot to Datong, I think by train, but I don't remember exactly. 10/21

I wake up in Datong and buy a ticket for China Railway N214次, 07车, 49号, for ¥31元. We depart Datong railway station 大同, Shanxi, at 12:27pm and head east toward Beijing 北京西. I arrive to Beijing West railway station five hours later. The train ride is magical, be sure and do this segment during the day. The train winds throught the mountains and goes through at least 50 tunnels.

In Beijing, I cab to the airport and buy a ticket (about 25 minutes before the flight) for China Eastern flight 5128, economy. My Airbus A321 takes off from PEK Beijing Capital International Airport at 9:00pm and flies south to SHA Shanghai Hongqiao Airport. Enroute, the kind chap sitting next to me suggests I visit Qian Dao Hu in Zhejiang We land about 90 minutes later. I take a taxi to Jeremy’s flat in the French Concession. We visit some bars. What a day!

A torential rain begins to fall once I leave the train station. I navigate to my hostel in the rain but take shelter in a university. Once the rain subsides I walk to my hostel. The hostel says they are full and ignore my reservation. I bicker and quibble with them until they let me spend the night in the office. I take an evening walk.

Night on train — I tour Nanjing in the day. My limited Chinese goes less far here as the accents here less forgiving and the knowledge of English is nill. I buy a ticket for China Railway 2521次, 10车, 02号中铺, for ¥86元. We depart Nanjing railway station 南京, Jiangsu, at 10:34pm and head south toward Huangshan 黄山, Anhui. I arrive to Huangshan station early the next morning.

I leave the train station and head to the Huangshan ticket entrance. I decide to walk up Huangshan rather than take the gondola. It is a fantastic walk up beat I am knackered by the time I make it to the summit. Unfortunately all the hotels are taken but I need a shower. I convine the reception at the Beihai Hotel to let me stay in room 215, the tour guide dorm room. It is myself and a score of Chinese men who sit around a table smoking cigarettes and drinking green tea and baijiu. I take a well-deserved long shower and sleep very well.

Met Juliet; ended up in Hangzhou that night

I buy a ticket for China Railway T730次, 10车, 01号, for ¥48元. We depart Hangzhou railway station 杭州, Zhejiang, at 2:44pm and head northeast toward Shanghai 上海. I arrive to Shanghai railway station two hours later and stay in a hotel in Puxi, north of the Puzhong.