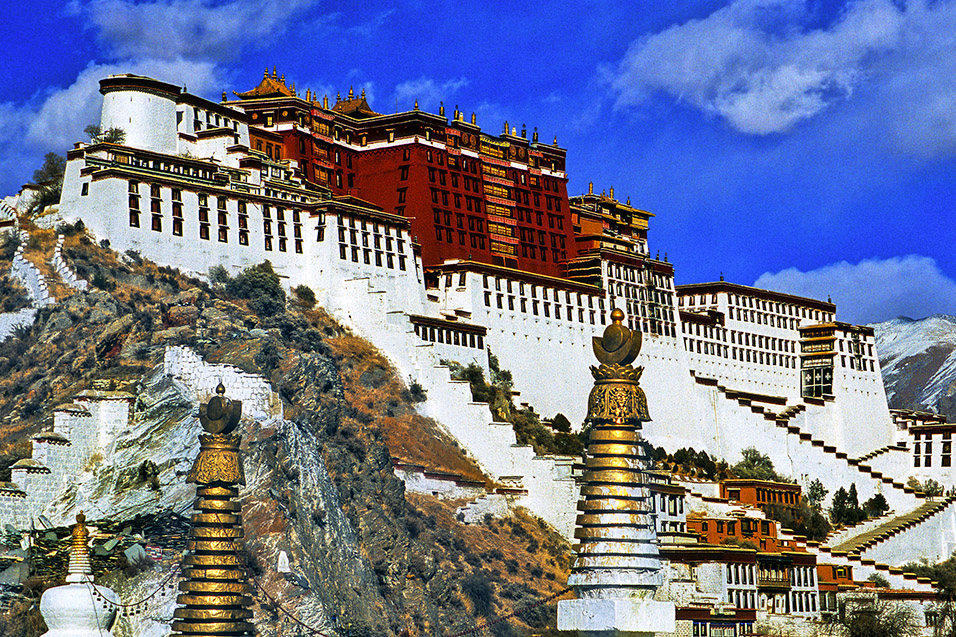 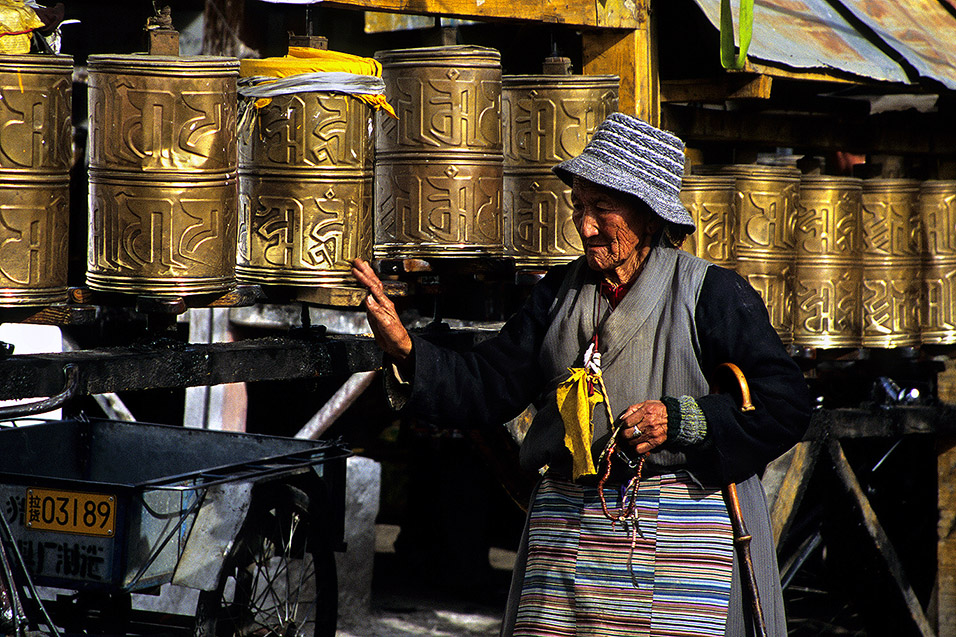 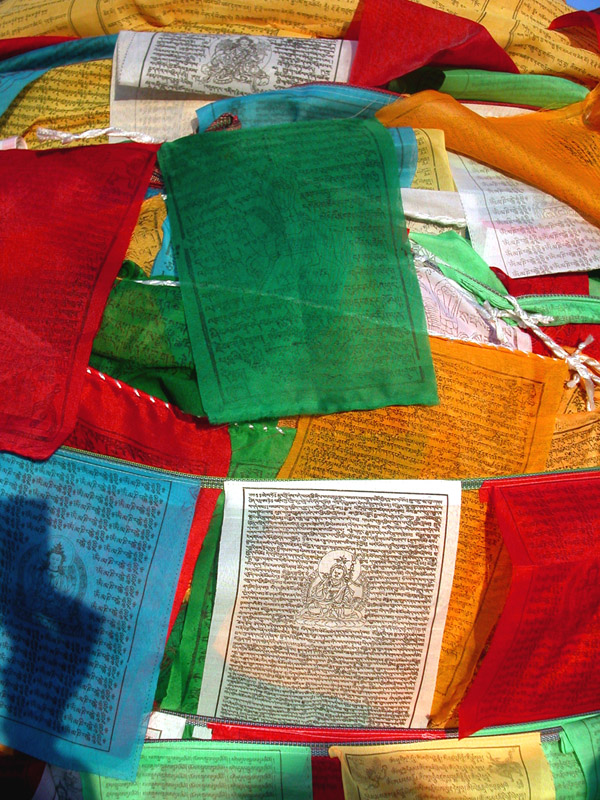 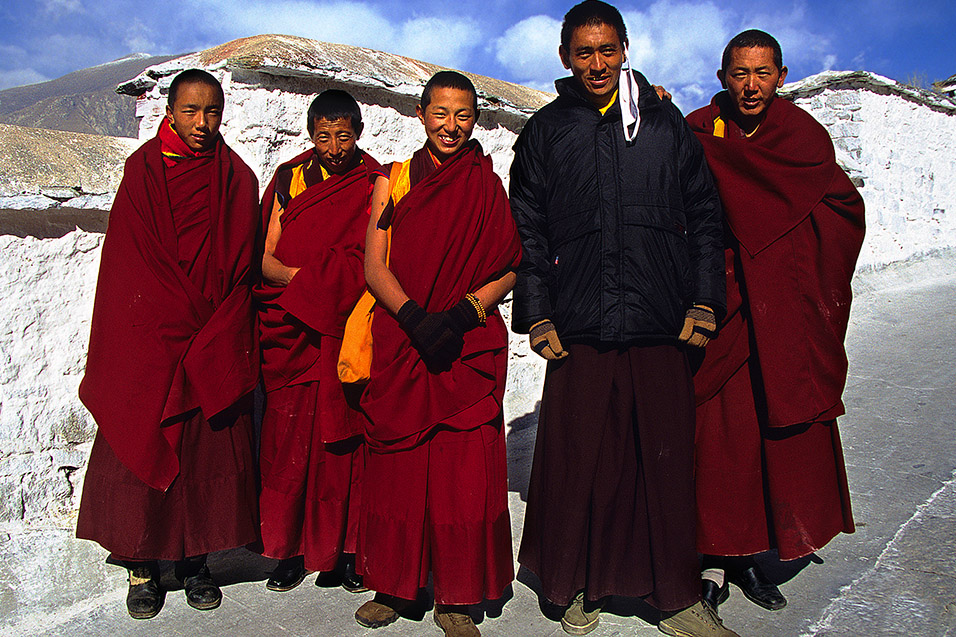 Tibetan monks on the path to the Potala Palace, Lhasa, Tibet — November 28, 2004 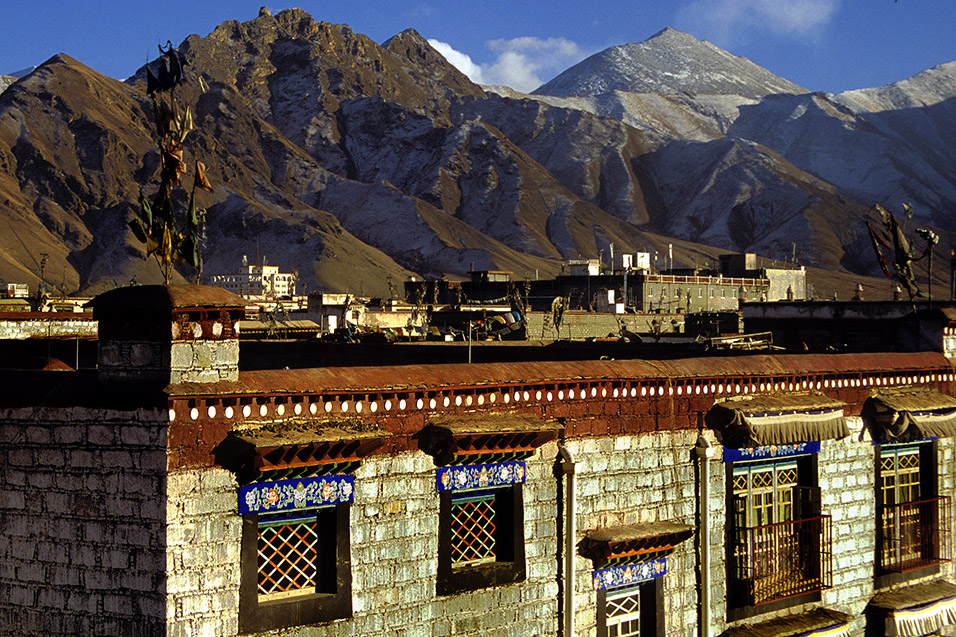 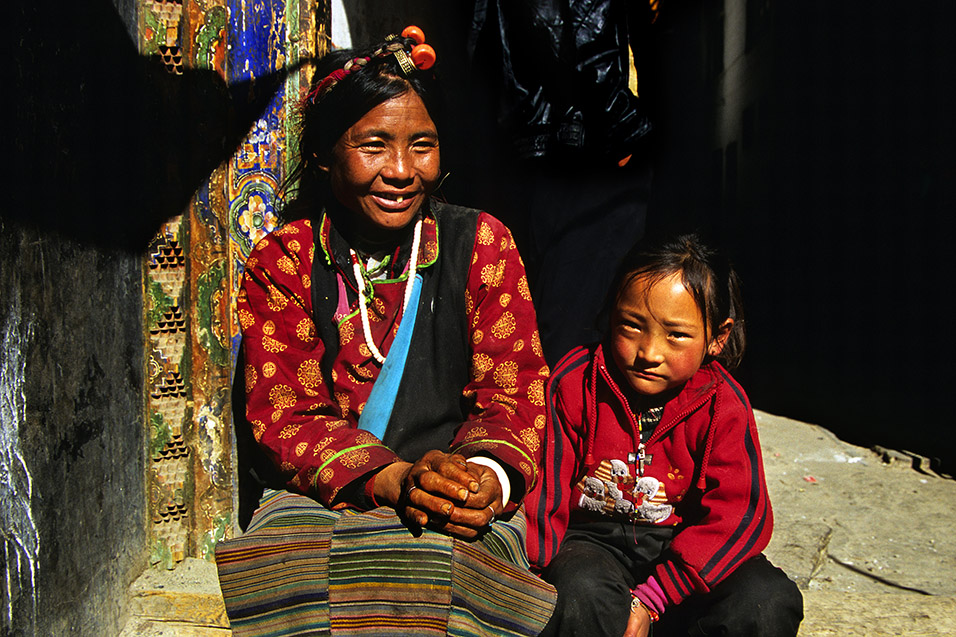 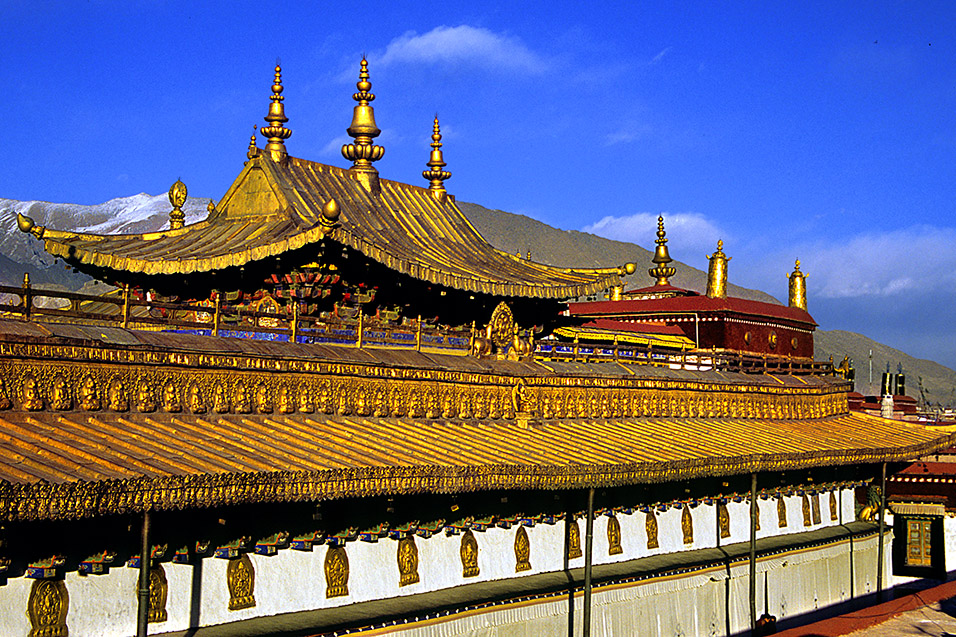 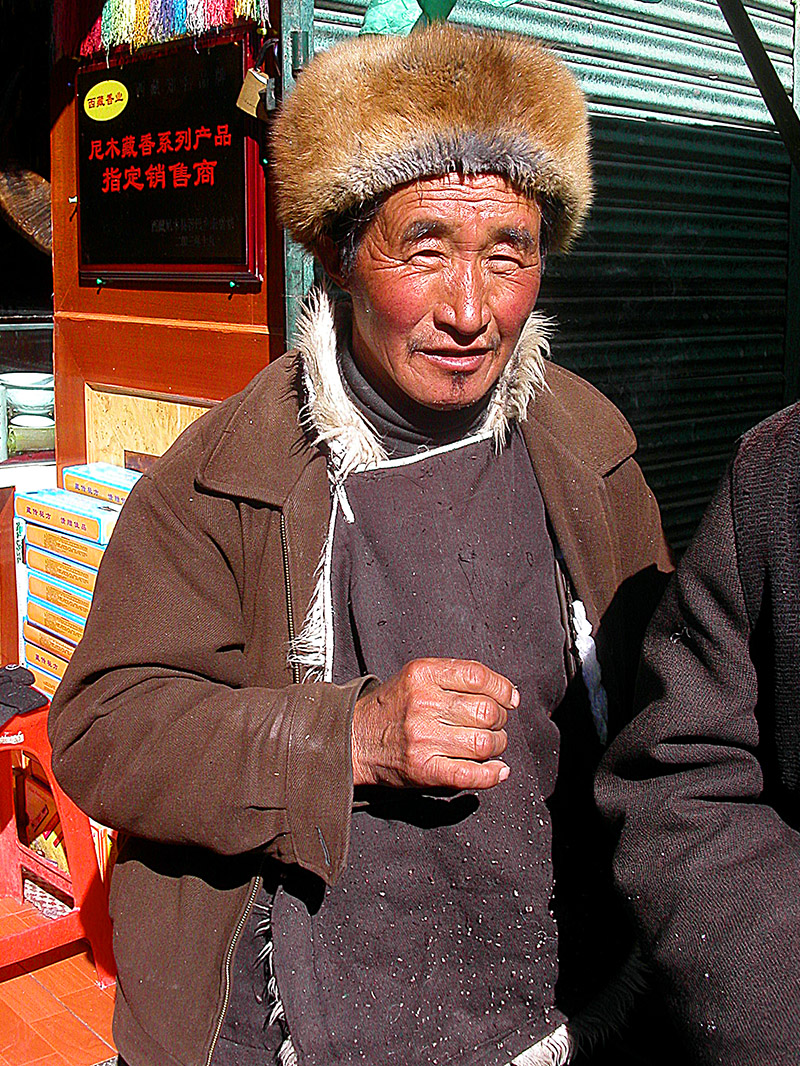 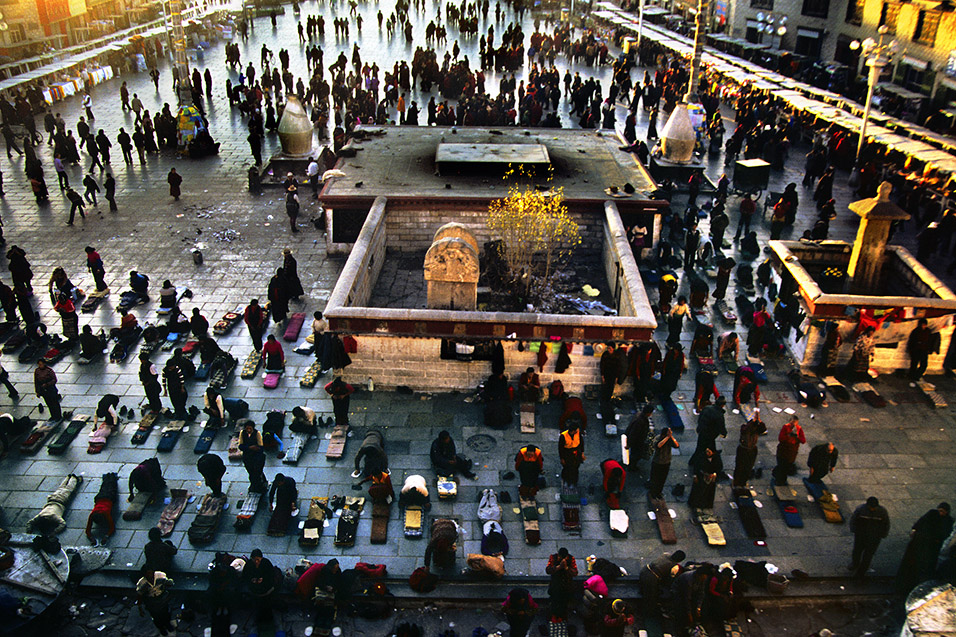 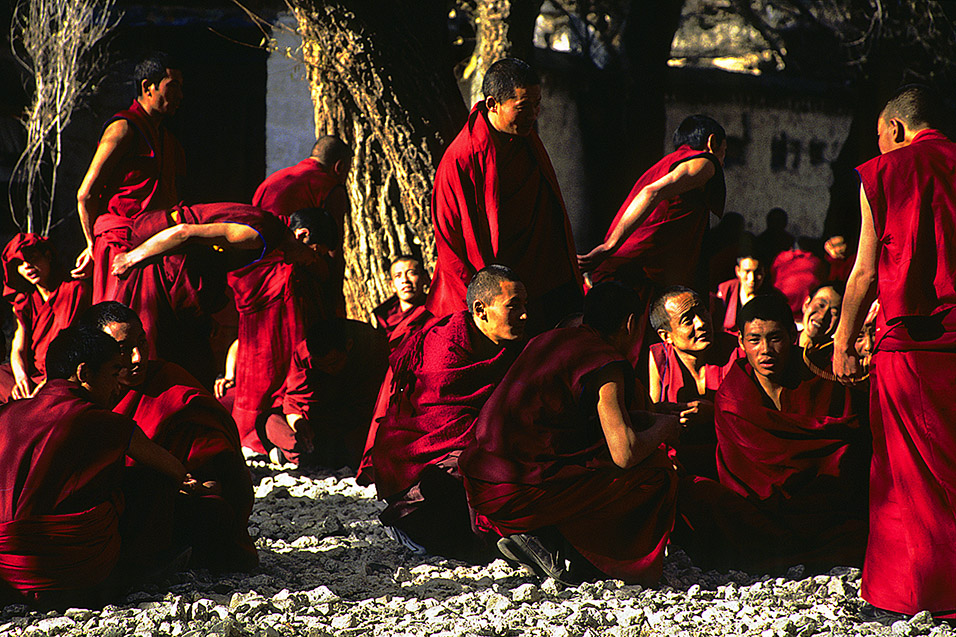 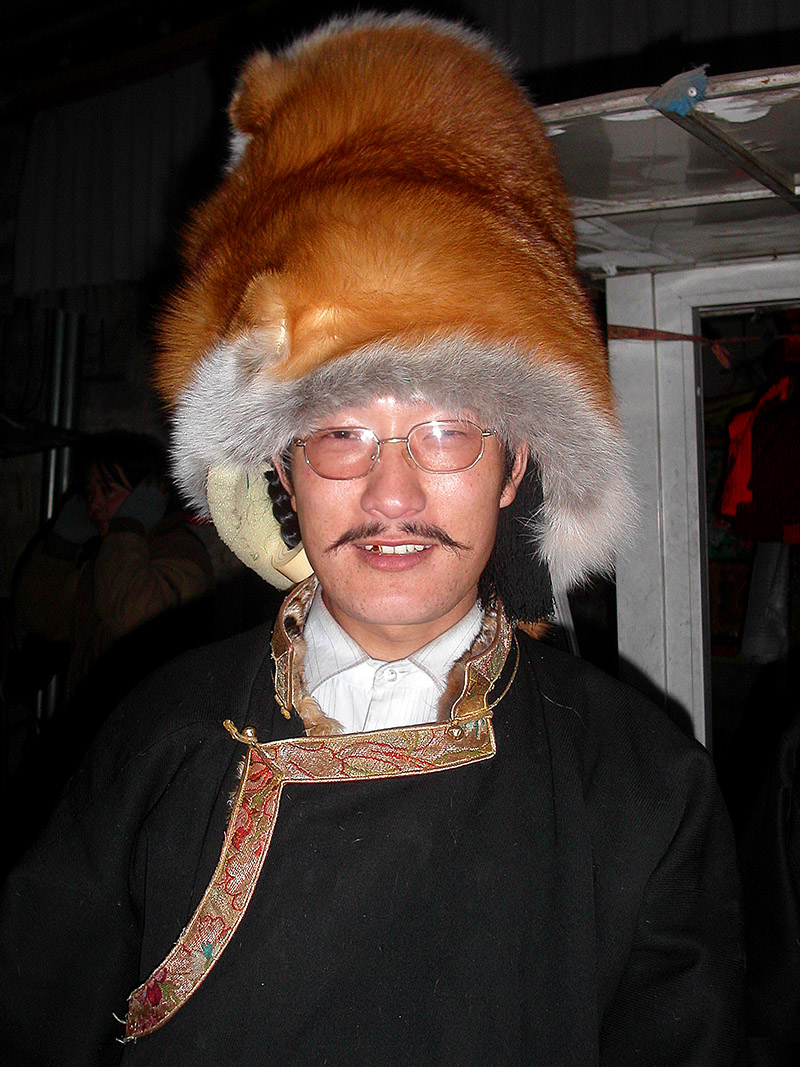 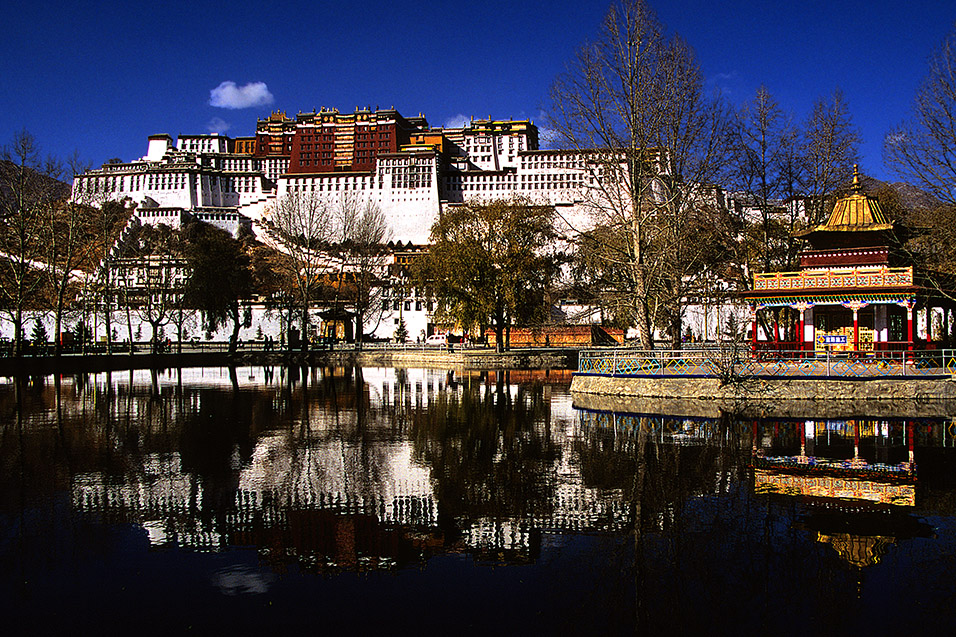 The Potala Palace is the former residence of the Dalai Lama 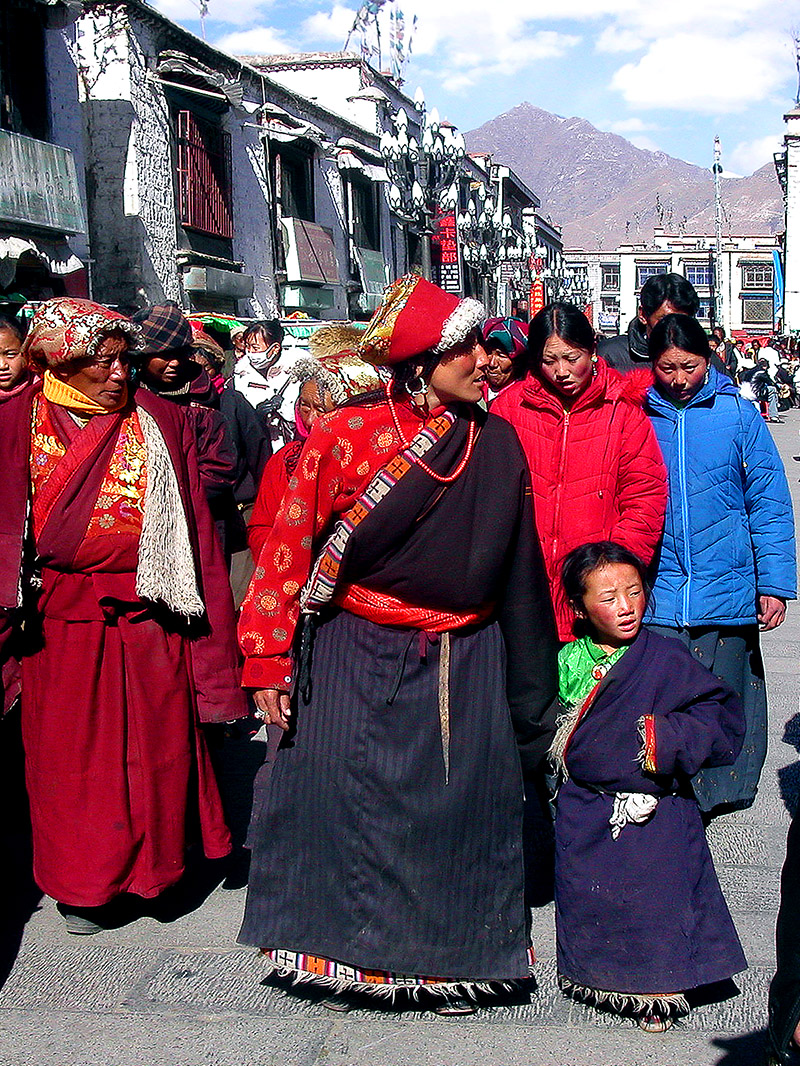 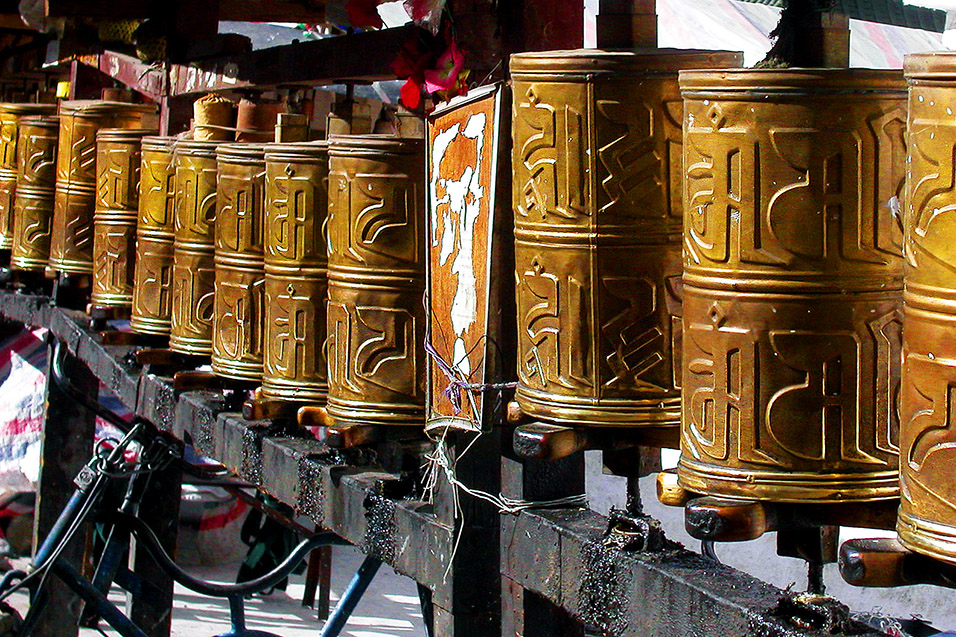 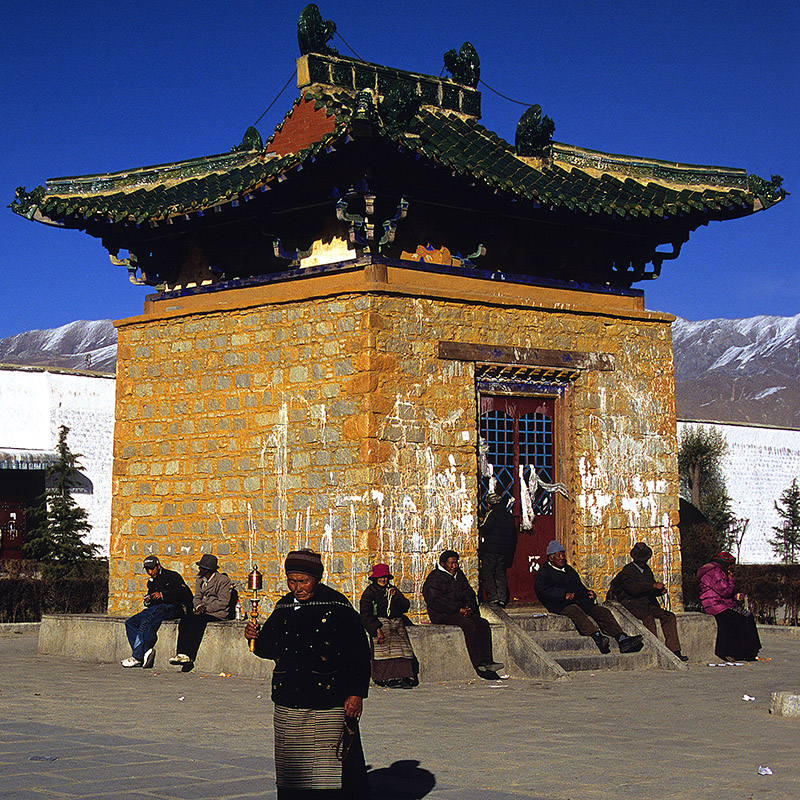 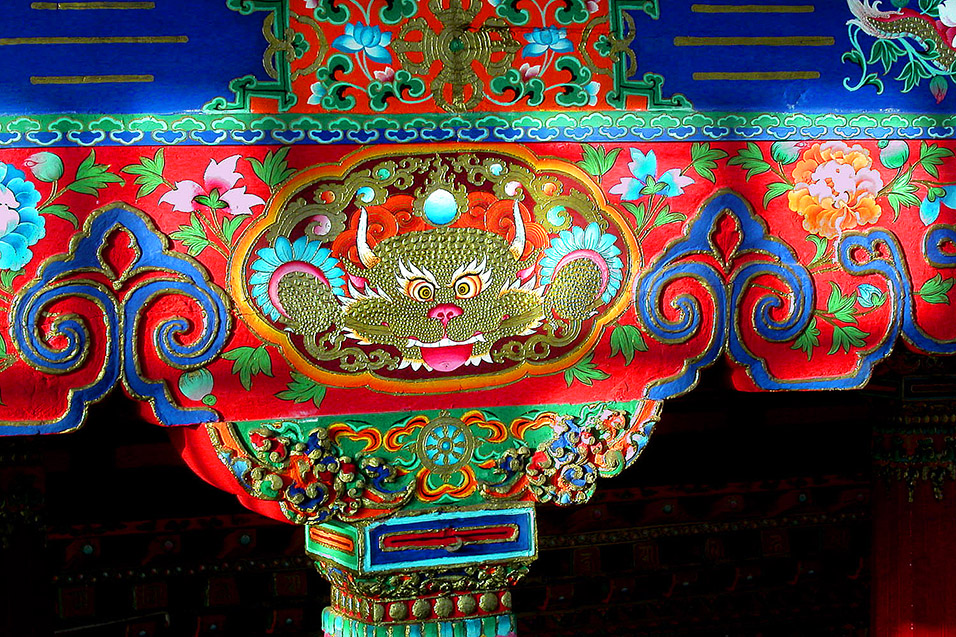 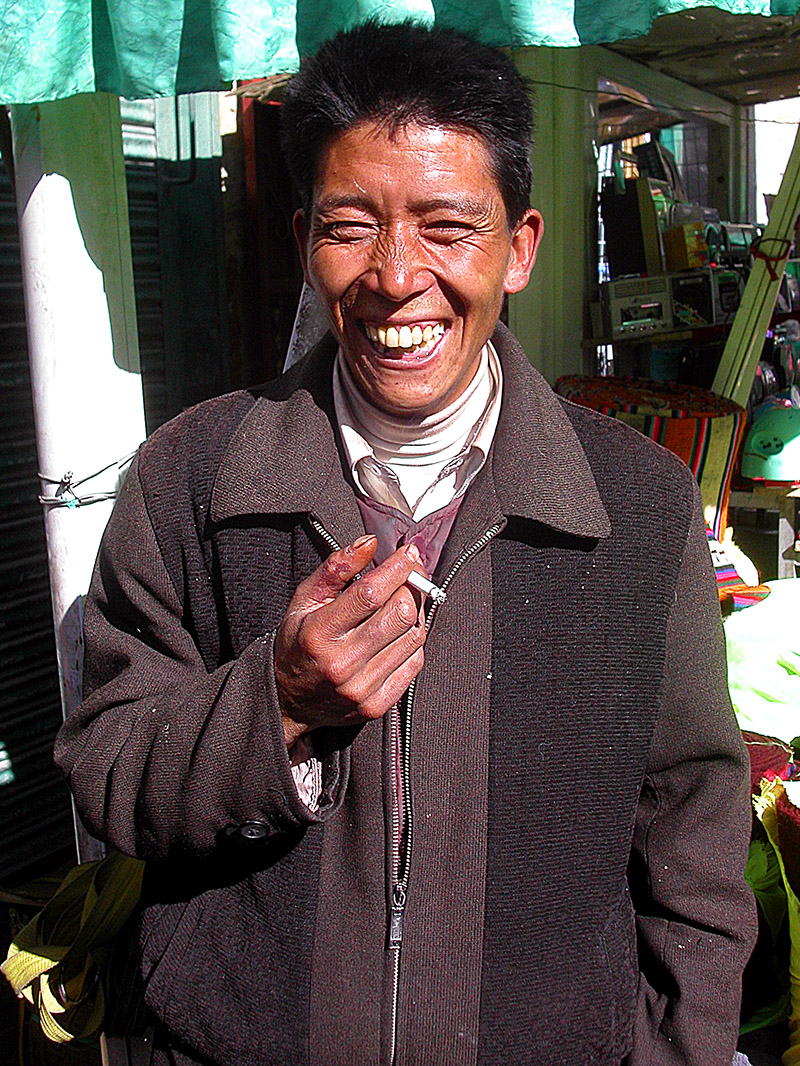 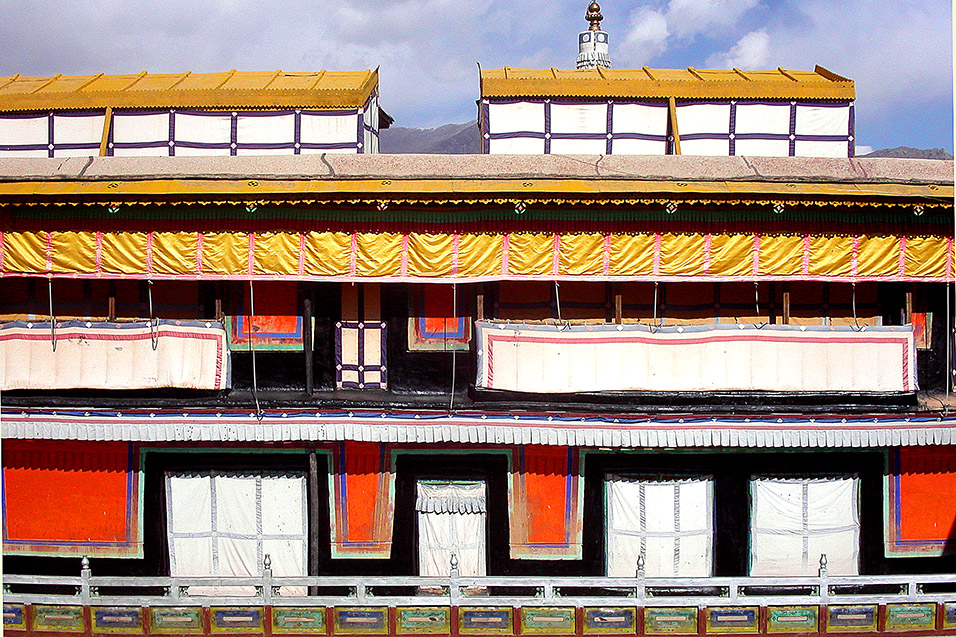 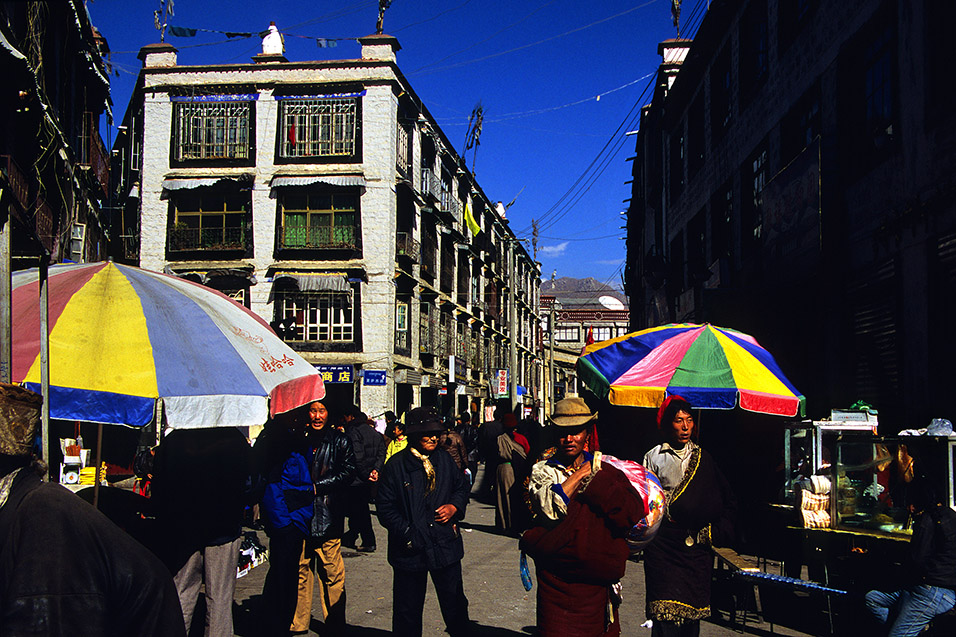 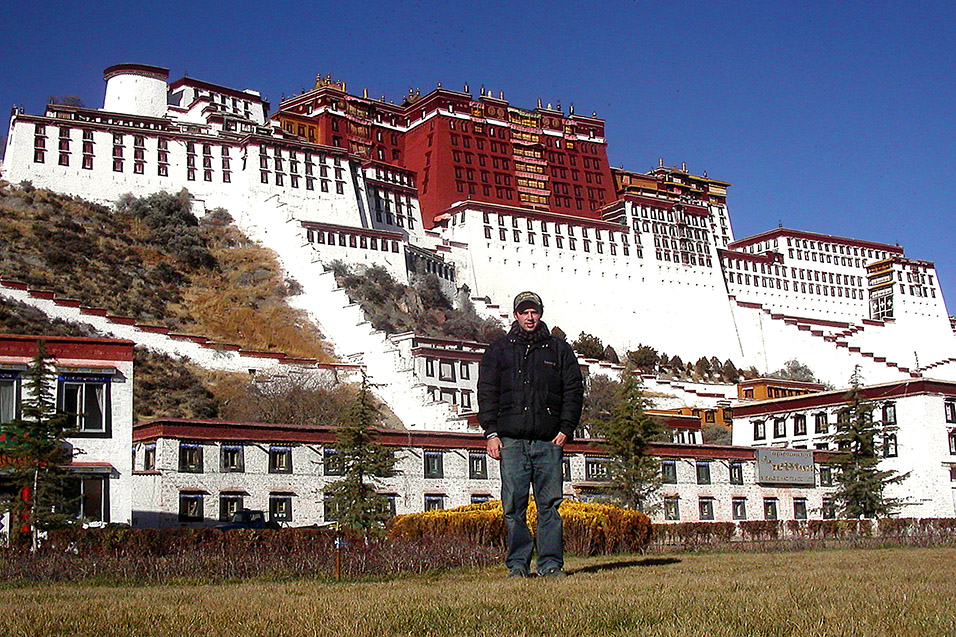 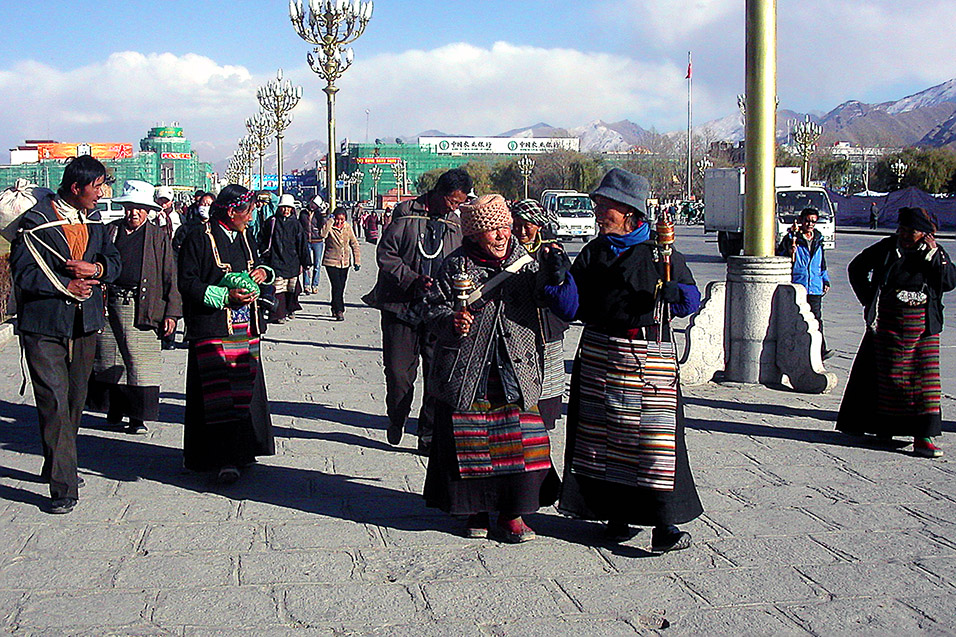 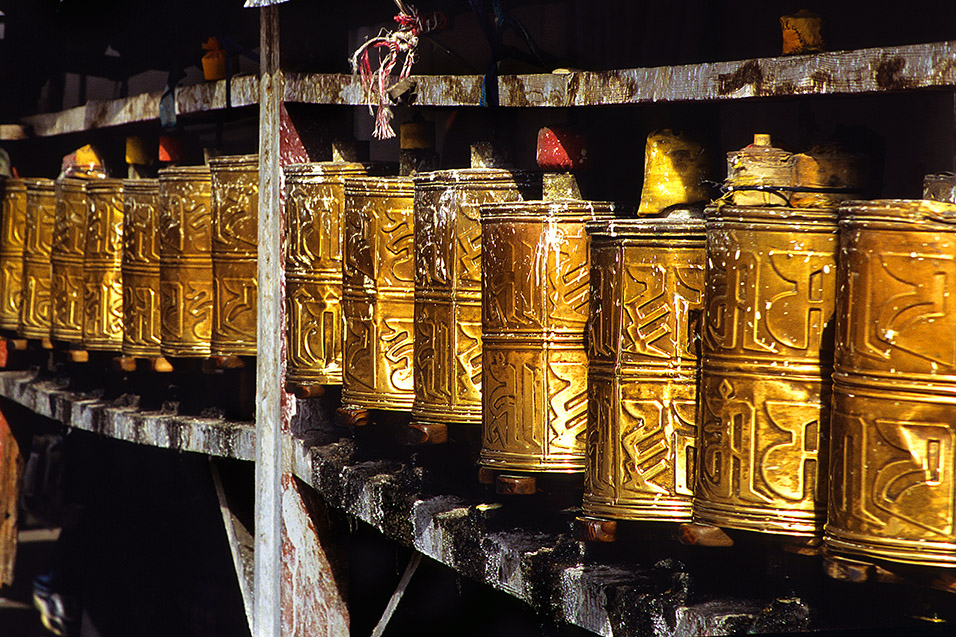 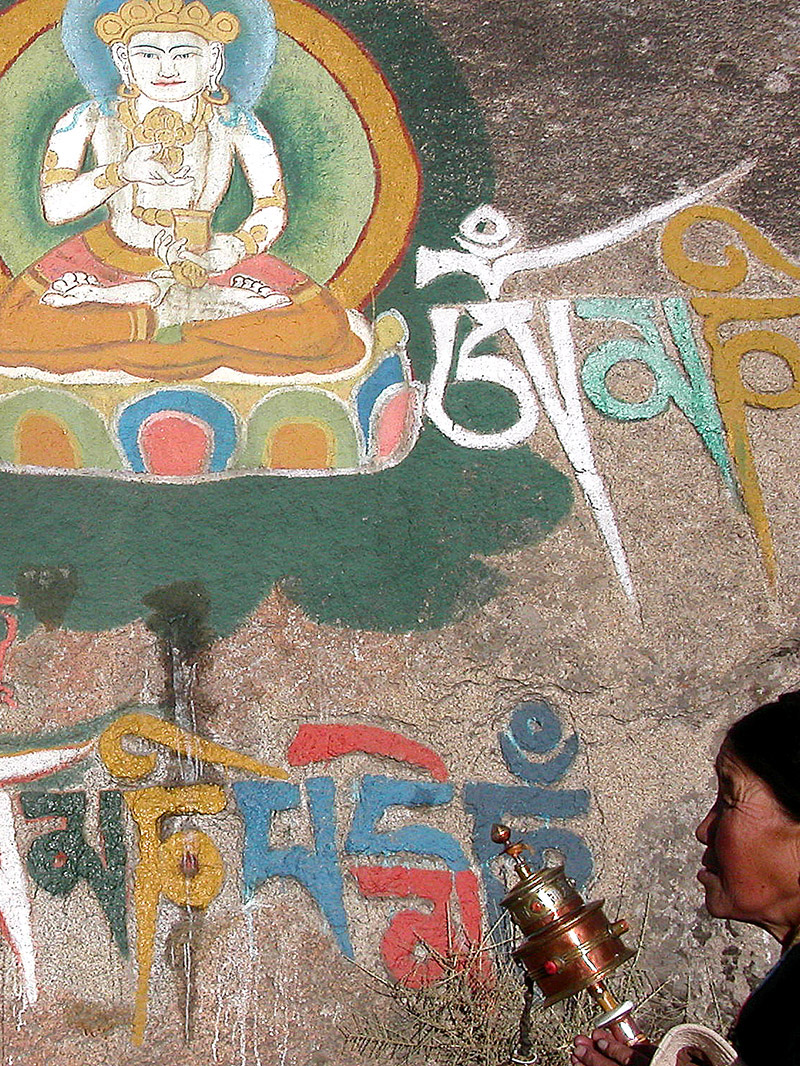 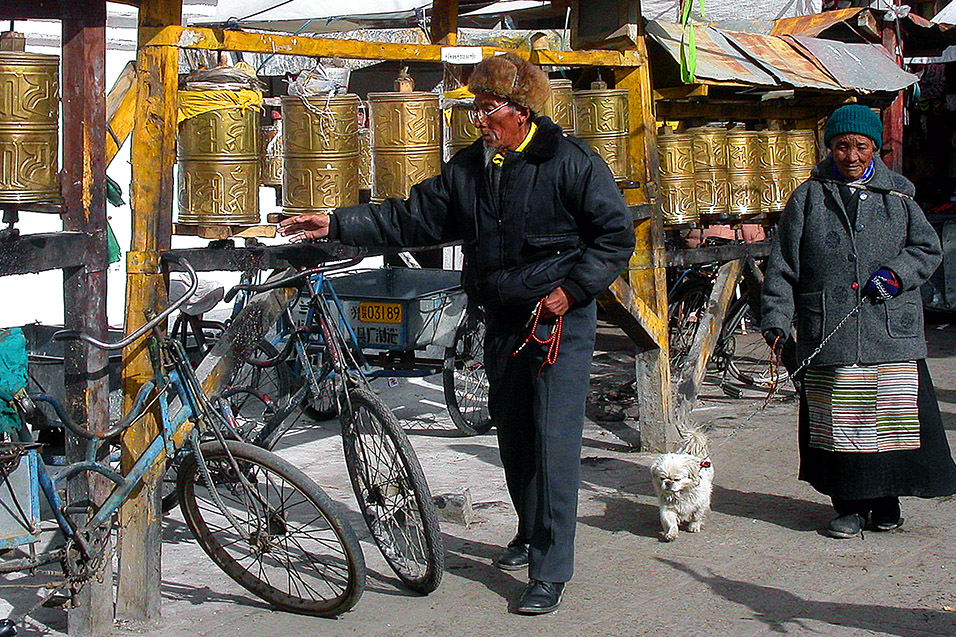 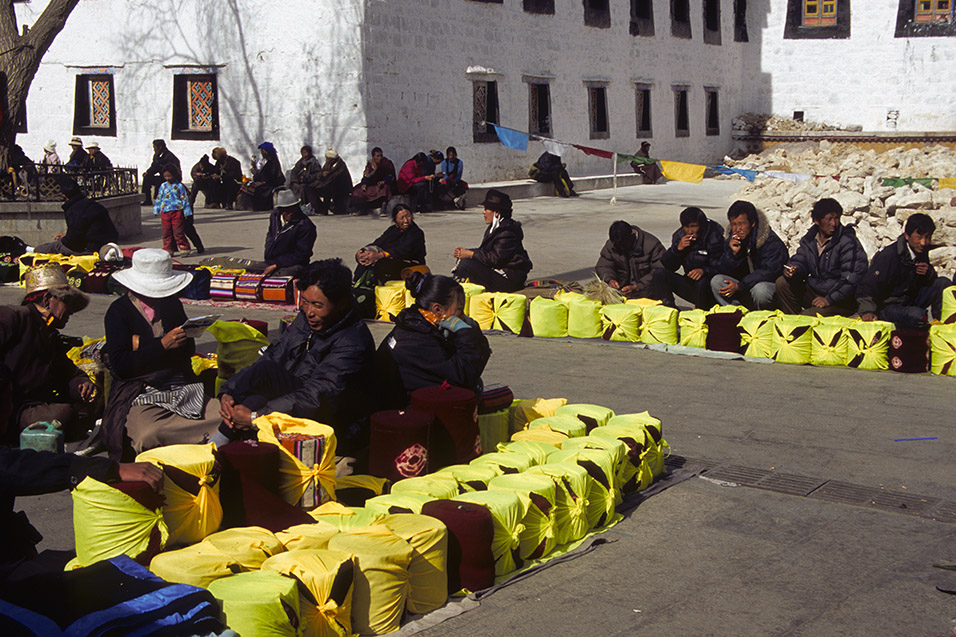 A brief flight on Air China hurls me to Shangri La, also known as the Rooftop of the World…
After the most dramatic flight of my life, I land in Lhasa (pop: 200,000) airport on November 27, 2004. My biggest fear, the cold, seems to not manifest itself in the way it did in Chengdu. Whereas Chengdu is a damp cold, Lhasa is a dry, forgiving cold. And in fact, even thought it is colder up here at 3,500 meters, I bake in the afternoon sun as I exit the plane. A 95km bus ride winds us into Lhasa at about 4:00. We find the recommended Pentoc Hotel and get a dorm for 25RMB. Things are great. I think about resting to help ward off the effect of AMS, but I am too curious to lay idle. I walk down the street to a main square, and then it hits. Holy moley! I am in Tibet. After 11 months on the Asian trail, not much stirs me these days. Sure, I love all that I do, but nothing really could describe the feeling as I lay my eyes on the Tibetan urban landscape for the first time. Let us just say it is goose bumps of the mind. People of all types are walking in all directions, but especially to the left side of a temple that shines in the setting sun light. Vendors are everywhere selling everything from mystical Tibetan kitsch to household items like pots and kettles. The throng of folks grabs me and I too walk to the left of the temple in a current of religious fever. Monks are chanting, as are normally dressed people. I am the only Westerner, and I stare at everyone as much as everyone states at me. Eyes Wide Open. I would have thought by now that Tibetans would be accustomed to Westerners. Yet we are still as much a mystery as there are to us. People are doing these push-up style chants on the ground bobbing up and down and chanting. Prayer wheels are everywhere along the sides of many buildings and are constantly spinning with inertia from previous prayers. I see a big room with a 10-foot tall prayer wheel and about 10 people spinning it clockwise around and around and around. I too help for one revolution, but it becomes a bit intense for me, so I exit and can’t even remember being inside the room. I walk on the maze for a bit but soon tire because my body is not yet acclimatized to the high elevation and limited oxygen. My attempts to go back the way a came fail when I notice that the current of people are all going in the same direction. I get pushed further and further away. I soon spot and intersection, pull a left, and then another left, and I am home free. What an hour!

Lhasa continues to impress my whole body. The morning finds it impossible for me to get out of bed and face my foggy breath. It is cold outside and even inside. The trickle of a shower doesn’t help either. I mope around town for the first part of the day in a state of subconscious reality. I pilgrim around the S and realize I need some food. A bit of yak noodle soup does the trick and re-energizes my body with sustenance. I walk to the Potala Palace and take some nice photos and then lose energy again. This altitude is taking its toll. I go back and lay for a bit but decide I have to make the most of the afternoon-- the warmest time of day. I walk the pilgrim circuit again and realize how special Lhasa really is. It is the Tibetan world in action full-on. There are people praying everywhere. Others are walking about in constant motion. Where is everyone going all the time? I go into one small temple with a prayer wheel that takes up most of the space. One elderly woman invites me to spin, so I revolve 4 times and exit in bliss. Really neat. I crave carbohydrates, so go to Discos and get some fries and then dine with the Aussies and some French and the Belgian girl. Now I am here.

Wow, things are outstanding here. I didn’t know what to expect, but I have to say that Lhasa exceeds all expectations for greatness. There is spirituality everywhere. People are literally crawling on the floor chanting. Other walk about town spinning handheld prayer wheels. The old people are so cute, and the kids all have the rosiest red checks-- probably too much sun. The fashions, like you said are great too, and many people wear what only a rock star of the 1960s could get away with.

Lhasa is beautiful in the afternoon, warmer than Beijing because the sun shines bright. But fuck, the mornings are a killer. I can’t even get out of bed before ten because I see my breath in my room. But I am happy that I am here now, and I am thinking that I will have to come back when it is warmer and when I can do more trekking.

The days are moving on and I am breathing easier. Today is my last day in the heart of Tibet, as tomorrow I move east towards Katmandu. It looks like I have met up with a great crew, and together, we are renting a Toyota Land Cruiser for a four day trek across Tibet. If all goes as planned, we will visit alpine lakes, remote monasteries, and the biggest hill on Earth!

Today, I biked up to the Sera Monetary. They wanted a ridiculous amount to get in, but instead, I went left and entered thru the back door. After about 100 meters, I come across a courtyard filled with monks in maroon, and everyone is debating. I can’t understand anything, but see when one monk is finished talking, he slaps his hands, and then someone else continues talking.

I also spent some time in the central square. The same old. Well, I am off tonight, and then it’s is a long road trip. I can’t wait to get to Katmandu and chill out for a bit…

No one seems to agree on the elevation of Lhasa. LP says 3,590 meter. Other sources indicate 3,700 meters. Even the locals disagree, and some say it is as high as 4,000 meters. Either way, it is high enough to suck the wind out when any thing more than an easy stroll is undertaken.

I rise at 7:00a and meet the crew I am to travel with for next four days. Moments later our late-80s tan Toyota Land Cruiser pulls up. We pack and are off. This trip is to be one of the most momentous of my life and words can’t describe, but here it goes anyhow.

The first two days are spent traversing the Tibetan plateau. Our average altitude is 4000 meters. The first night is spent in Shigatse. Upon arrival, we disgust in the amount of yak carcass that are for sale on the street in front of our hotel. We take a nice hike up to a fort ruin and watch a golden sunset light the city on fire. We have a nice dinner of mushrooms, veggies, soup, beer, etc. We all sleep soundly in a big five-bed room.

Erika, Meredith and I walk up to the Monastery and I am having a major photo snap session. The first room has a gigantic Buddha and the last room is a maze of stairs, people, monks, and golden designs. We leave town at 1:00p, a bit late, and speed until 8:00p to… Our hotel seems like an outpost and there is a neat dining area where we drink beer and some Champagne drink.

We wake really early and roust the driver and head off to Mt. Everest base camp. We lunch it in a small town of , and meet up with the Japanese contingency. The light is perfect and the contrasts of blue, tan and white make for endless photo opportunities. After lunch, the two drivers work on the front left leaf spring and replace the holder. The drive afterward is non-eventful and when we get to Mt. Everest base camp, nothing is there but a beautiful and towering mountain in a blue, cloudless sky. Our altitude of 5,220 meters robs my lungs of much-needed oxygen and I nearly collapse after running to pose in a timed photo. We visit the R Monastery and then this is when the fun begins. Instead of taking the main road back, our drivers opt for a short-cut. Yaks and nomads are abound and it seems like no one has gone this way in weeks. We traverse the Tibetan step with great success until we come to and ice-field. Four-wheel drive to the rescue. We trudge on until we hit a frozen river. Inspection gives false security and as we drive on the river, the ice cracks and our car falls in the freezing streaming water underneath. I shriek. Now I have been stuck before, many times, but never, ever in a frozen river. My first thought is “I don’t have a sleeping bag!" and my second thought is “I am going to lose my toes to frost bite!" I stop panicking and begin copying the driver by breaking the ice around the car with the largest stones I can possibly throw. Being subject to the impact of stone after stone, the ice in our path eventually clears and we do drive through. The Japanese follow with much success. We cross more ice fields and rivers, but don’t get stuck again. Thank goodness. WE arrive to an unfriendly hotel and all squeeze into a small room. Dinner of Yak momos and leaf soup is good enough, but we get kicked out of the dinning room at 10:30 by a mean lady that would rather watch TV than let us jam on guitar and mandolin. How rude. WE are all exhausted though, and soon crash.

We wake before dawn; Beijing Time is the culprit of our multiple 8:00a pre-dawn awakenings. We again roust the driver and are soon on our way. Today’s drive is as spectacular as the previous. We pass many more Giants and soon Ben says “say good-bye to the Tibetan plateau." Then we begin our decent; and like an airplane, we go down and down and down and down. It seems like we are gong down forever. The trees pop out of nowhere and Tibet is gone. It is so beautiful. WE have a nice lunch of ear-wood mushroom and pork and greens and then head on to the border. ____ is the most beautiful border town.