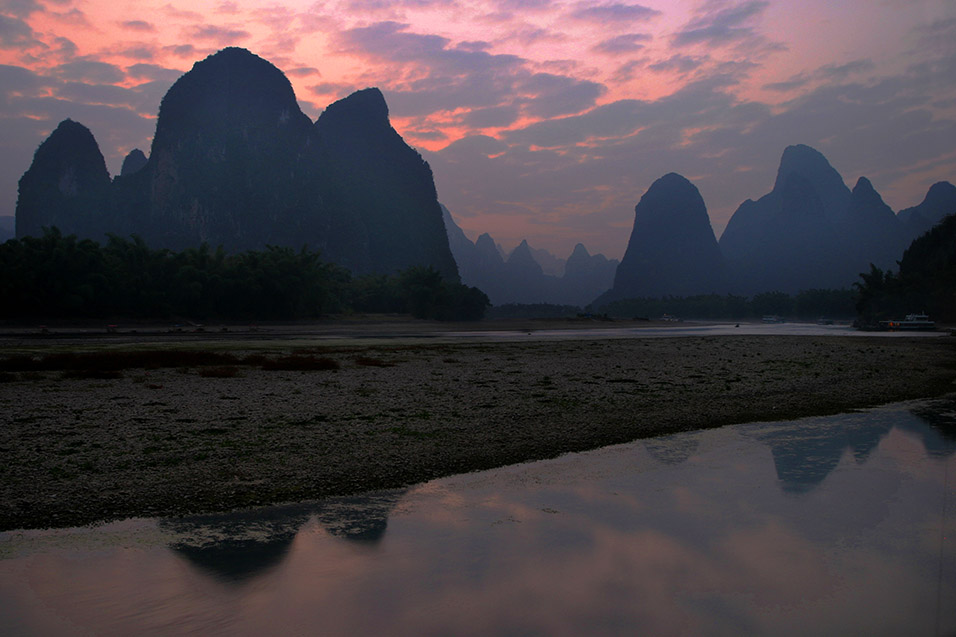 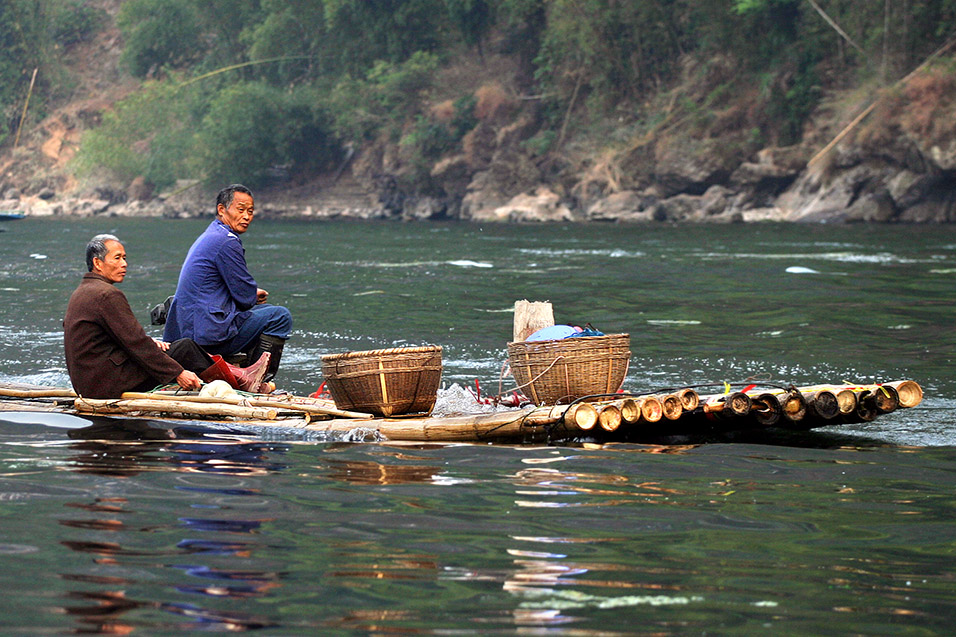 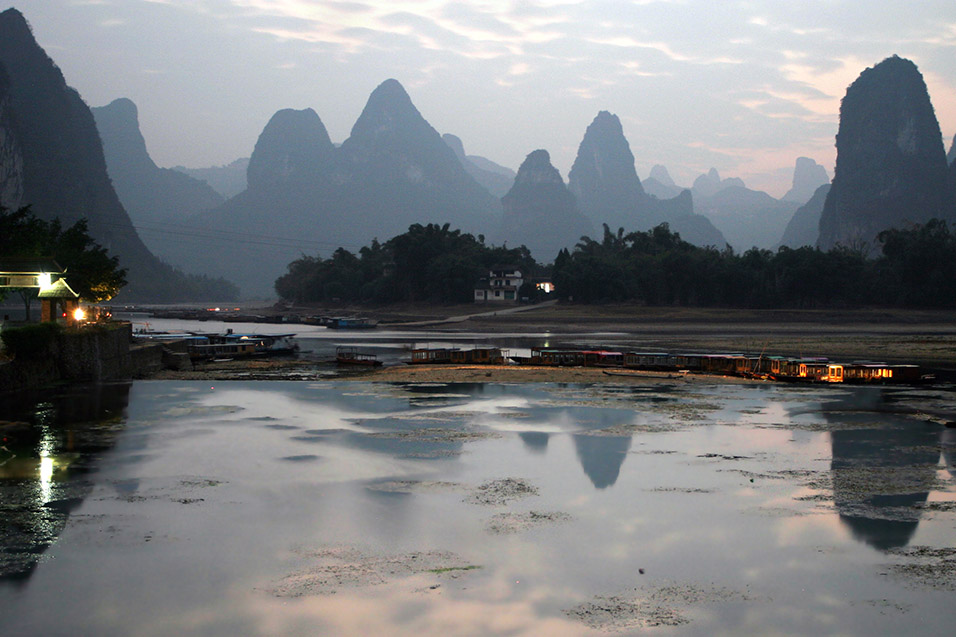 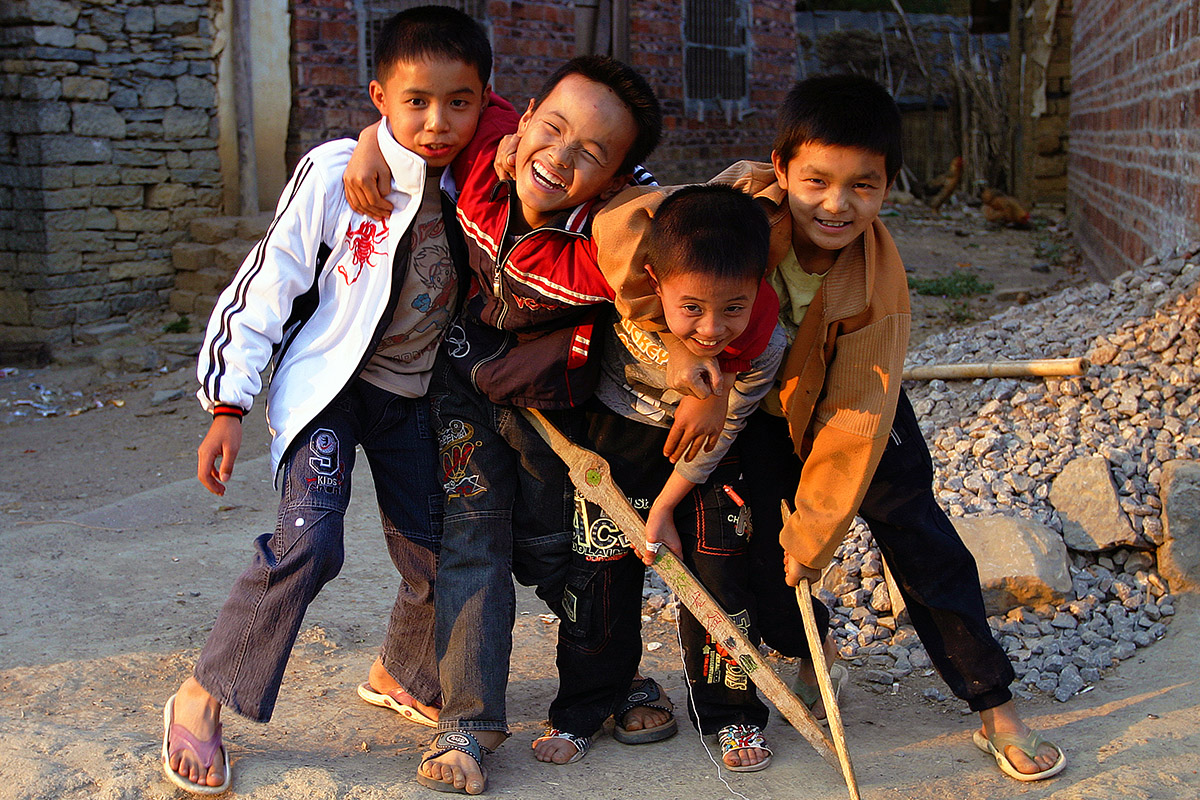 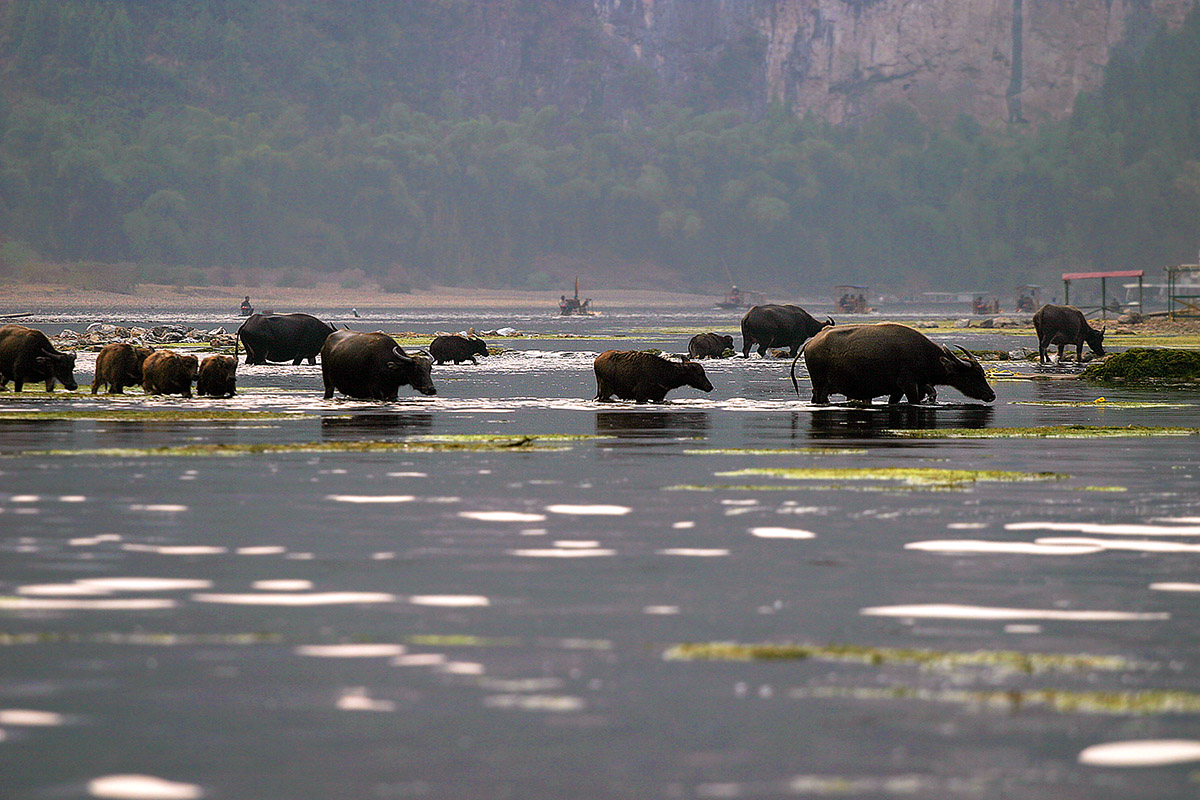 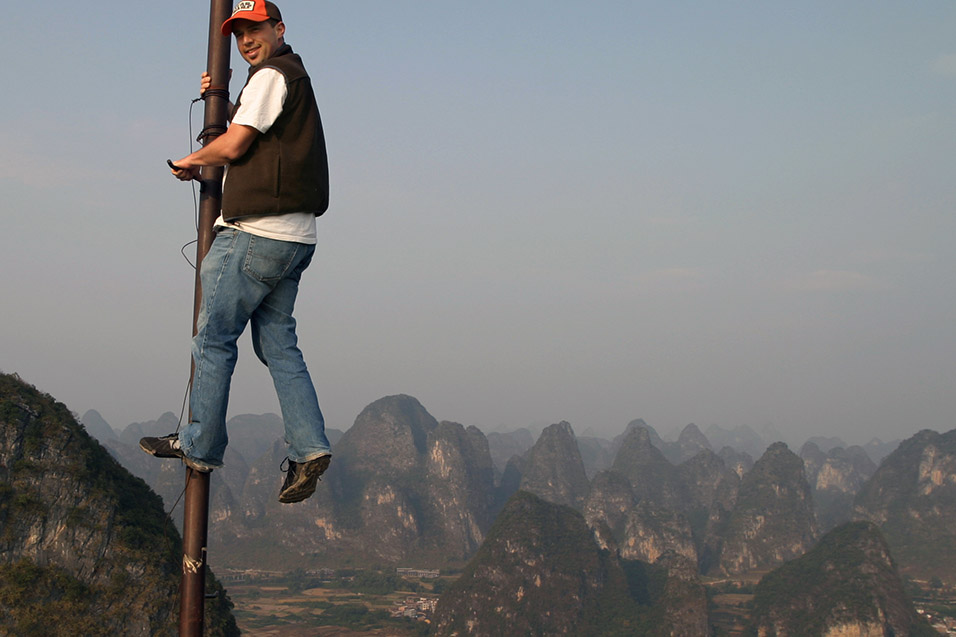 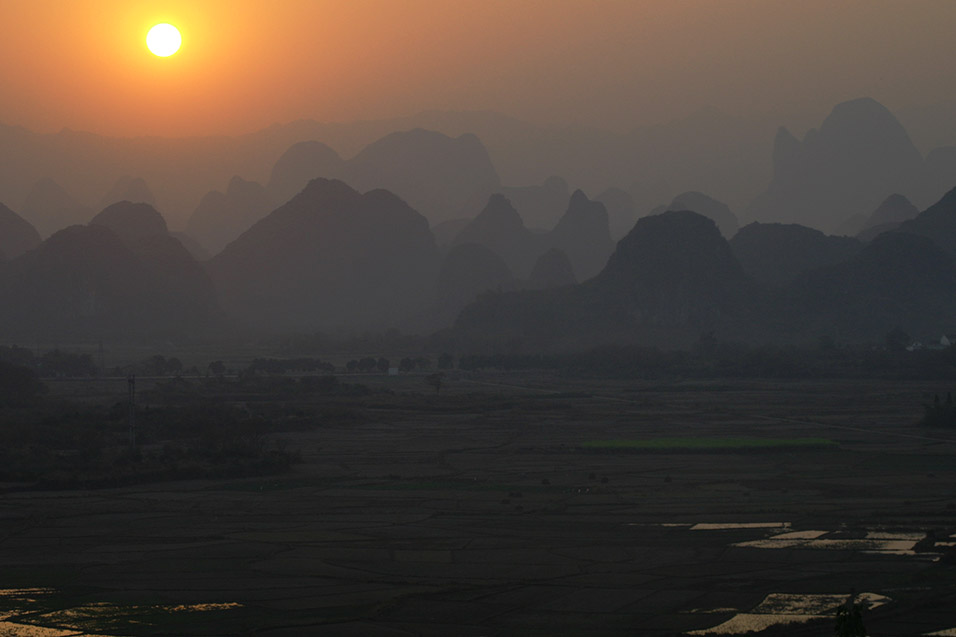 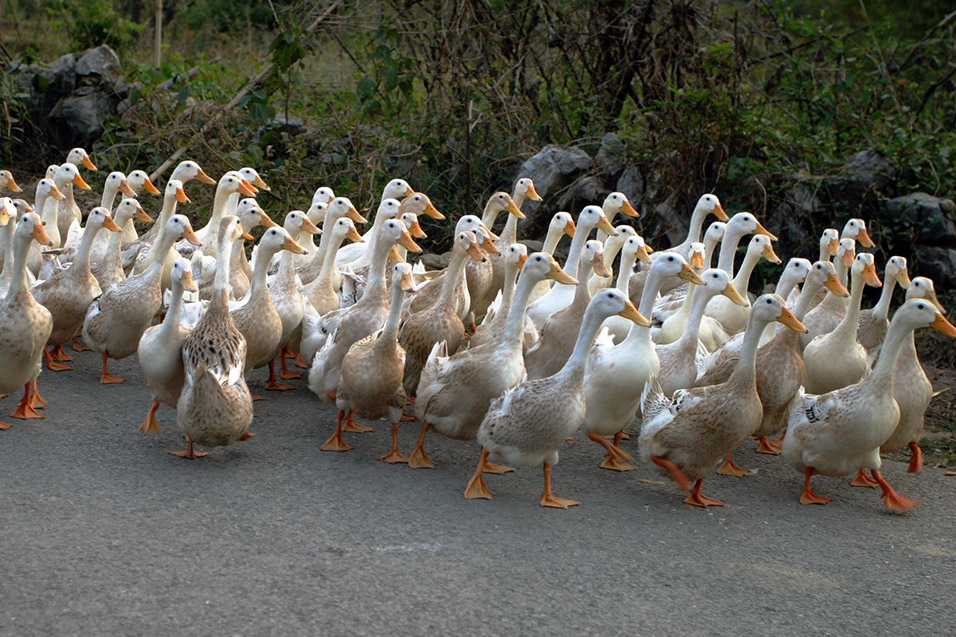 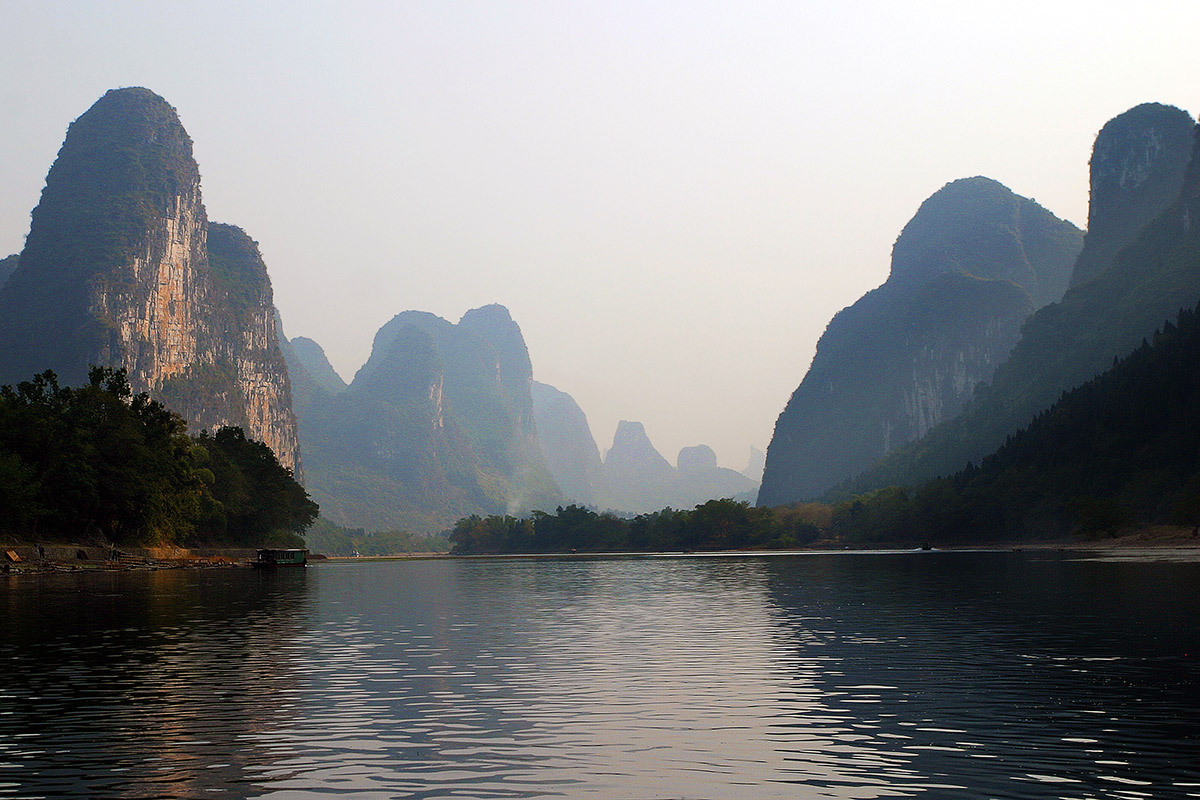 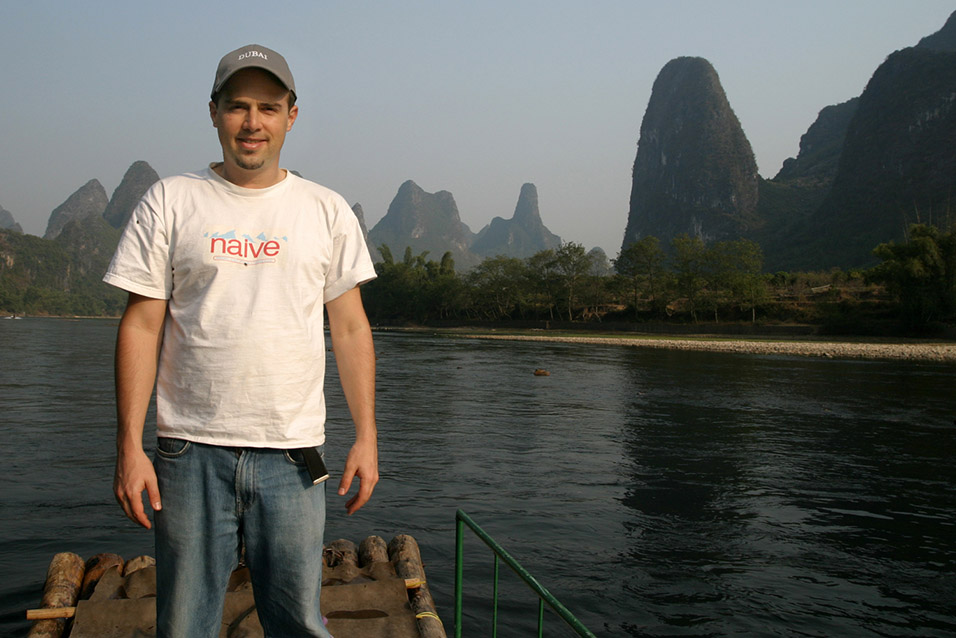 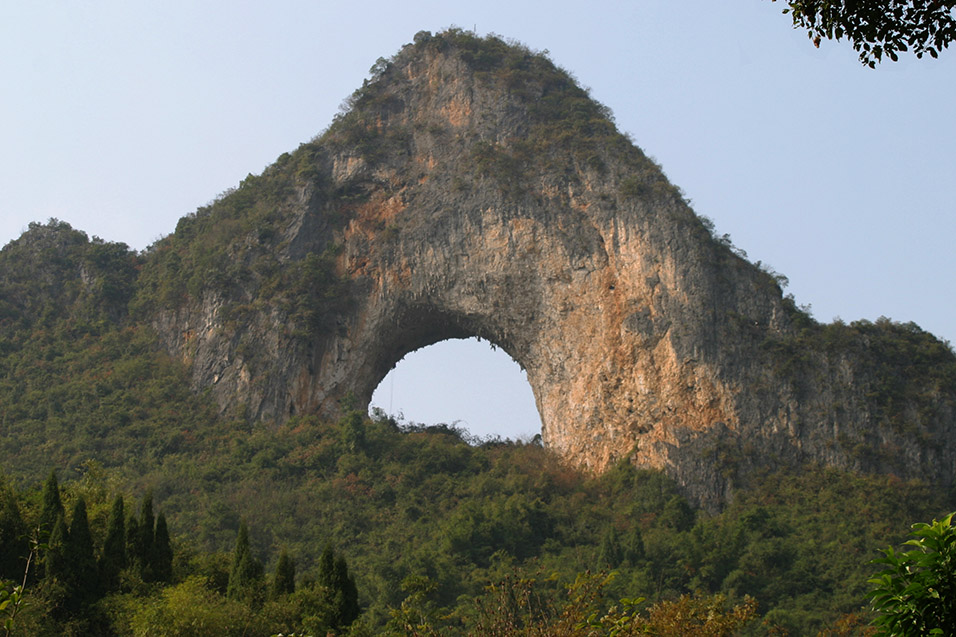 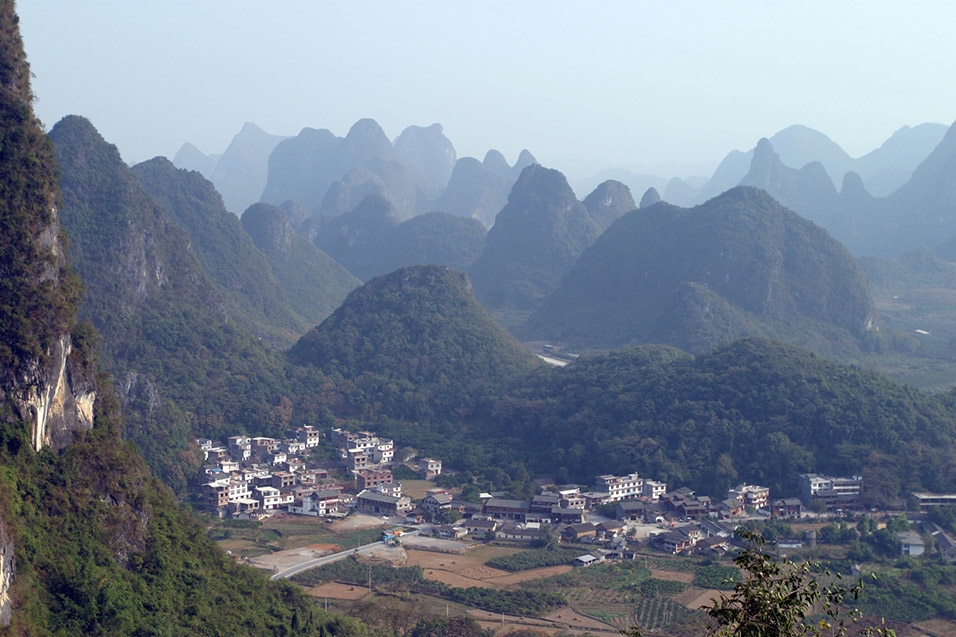 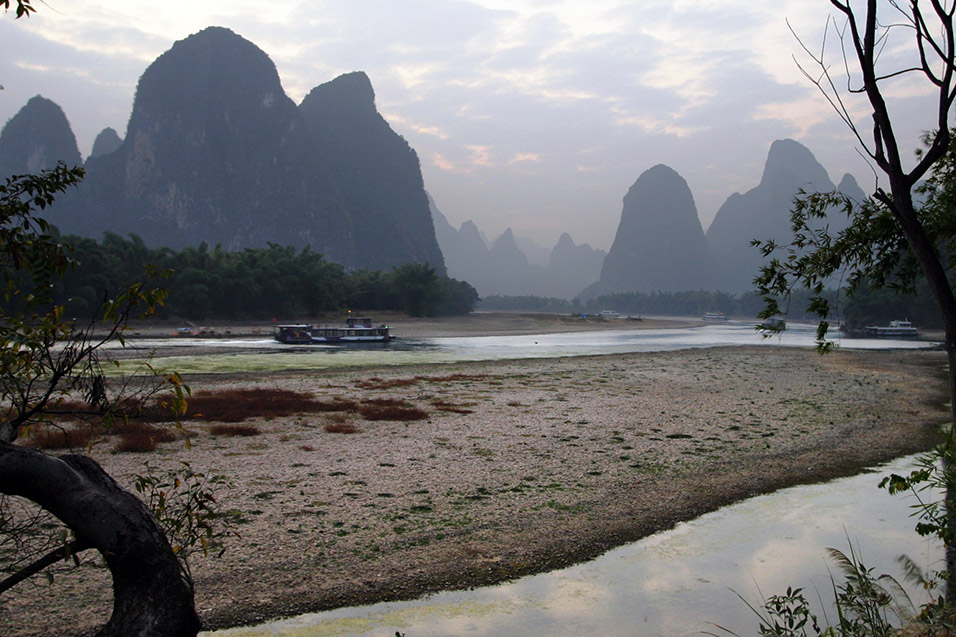 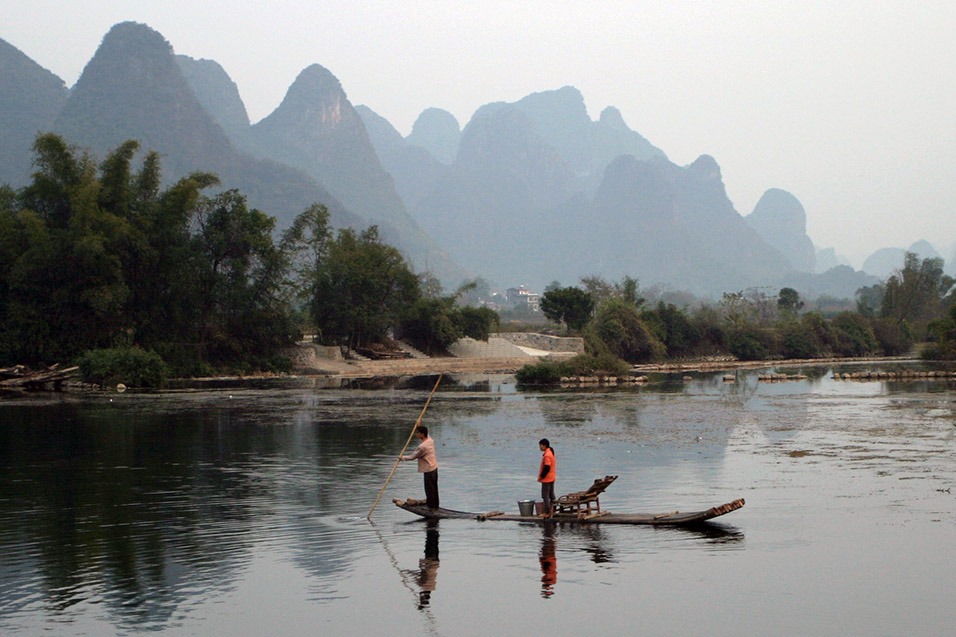 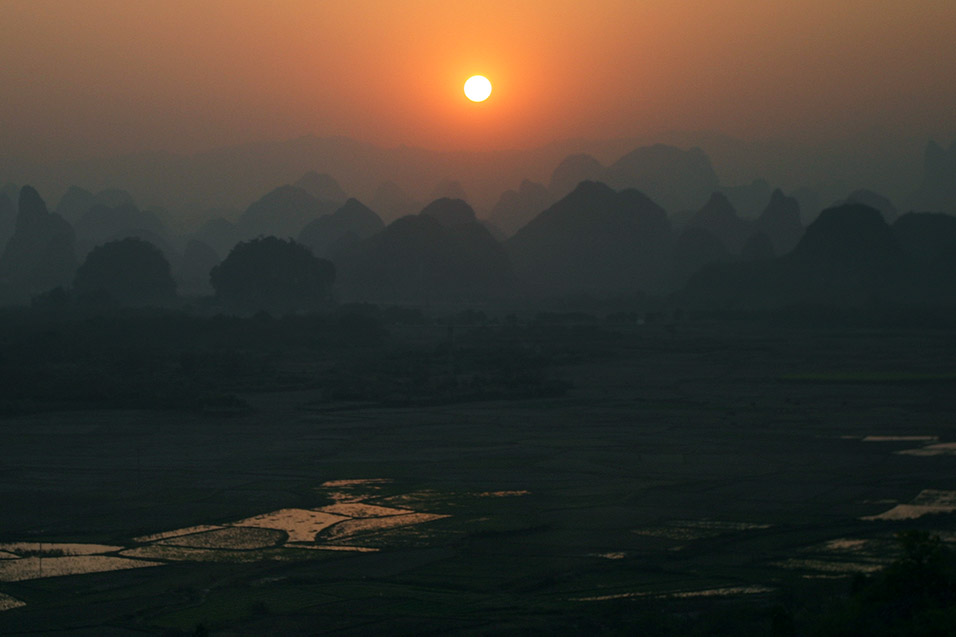 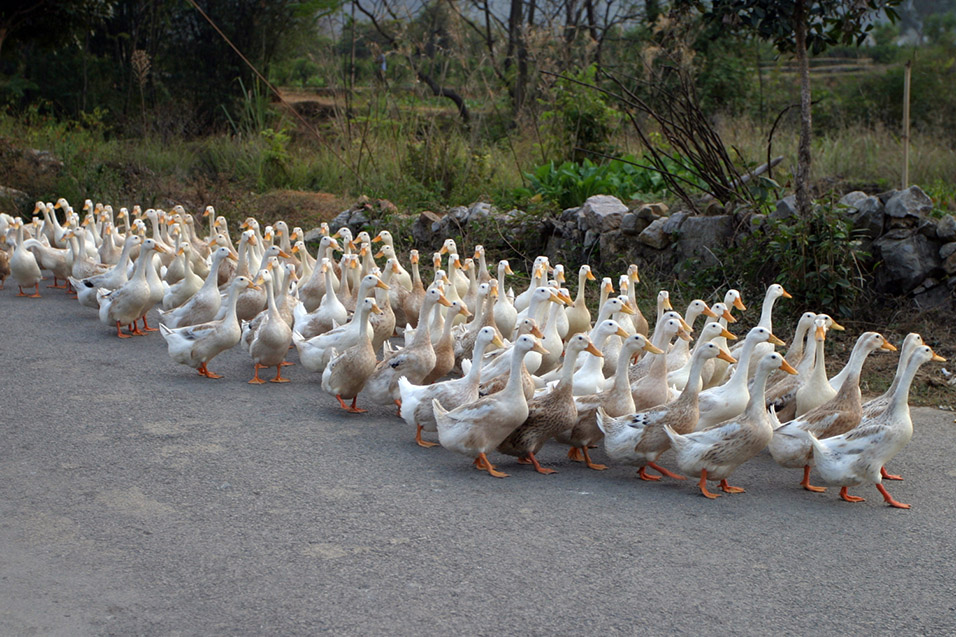 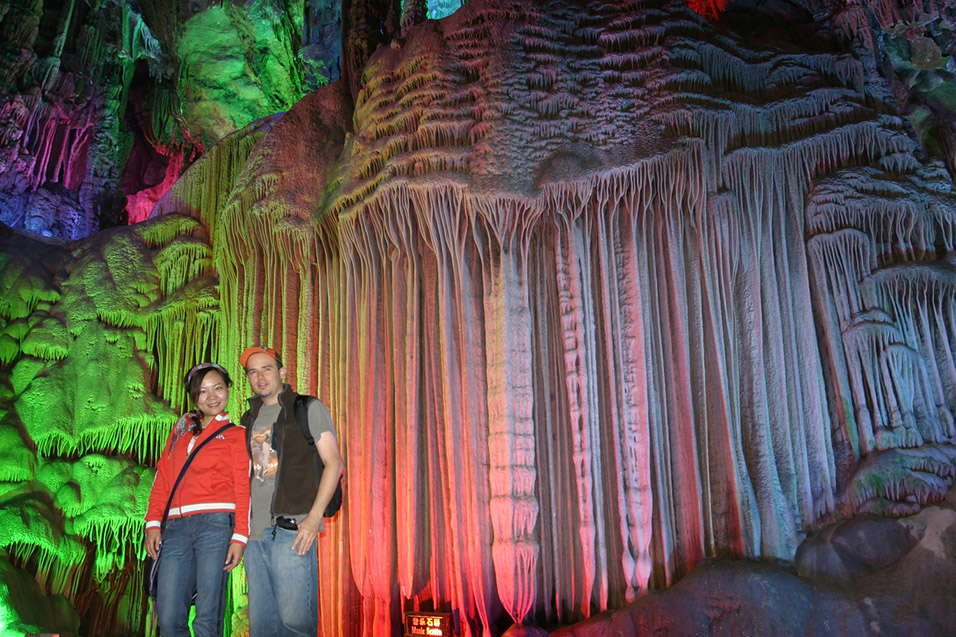 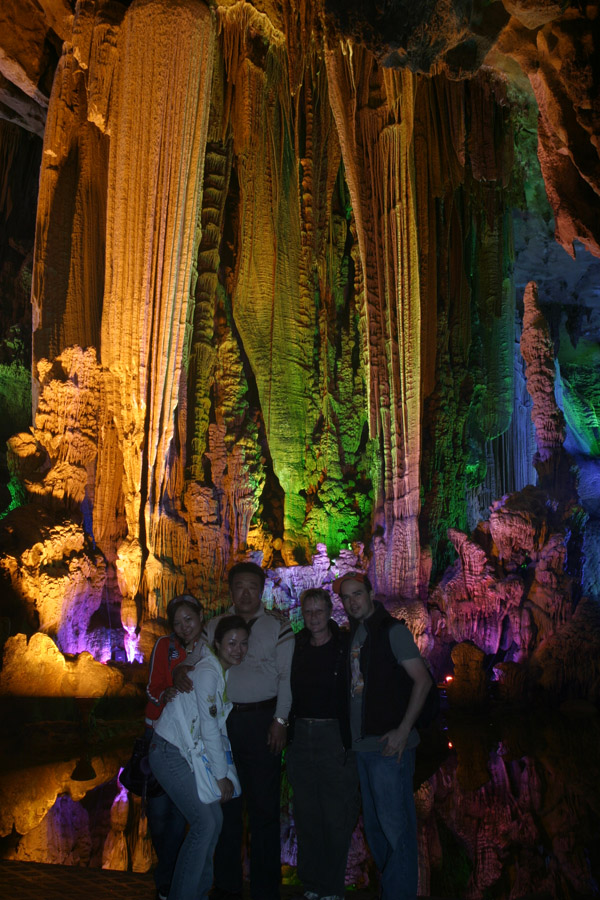 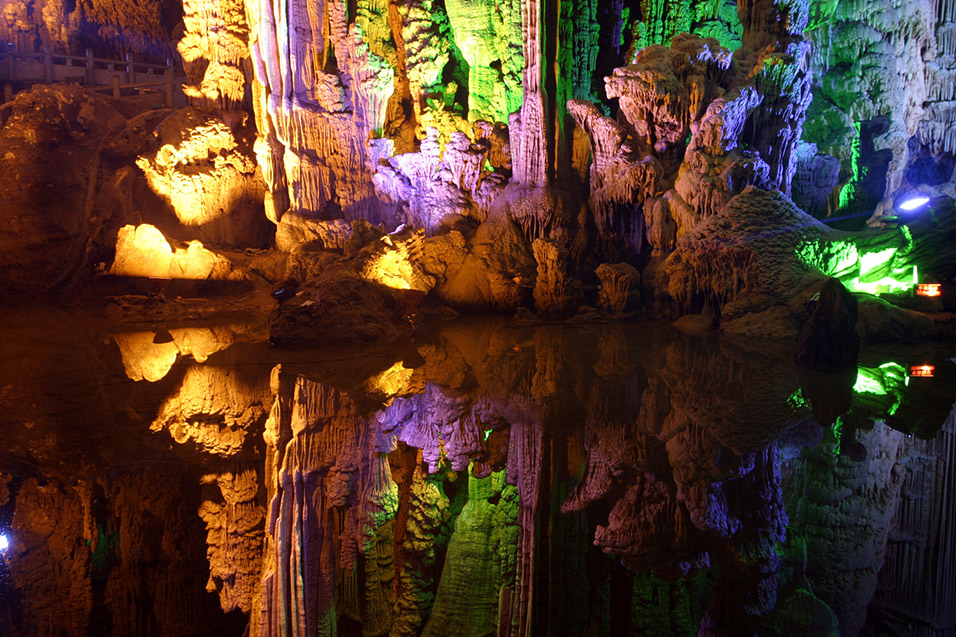 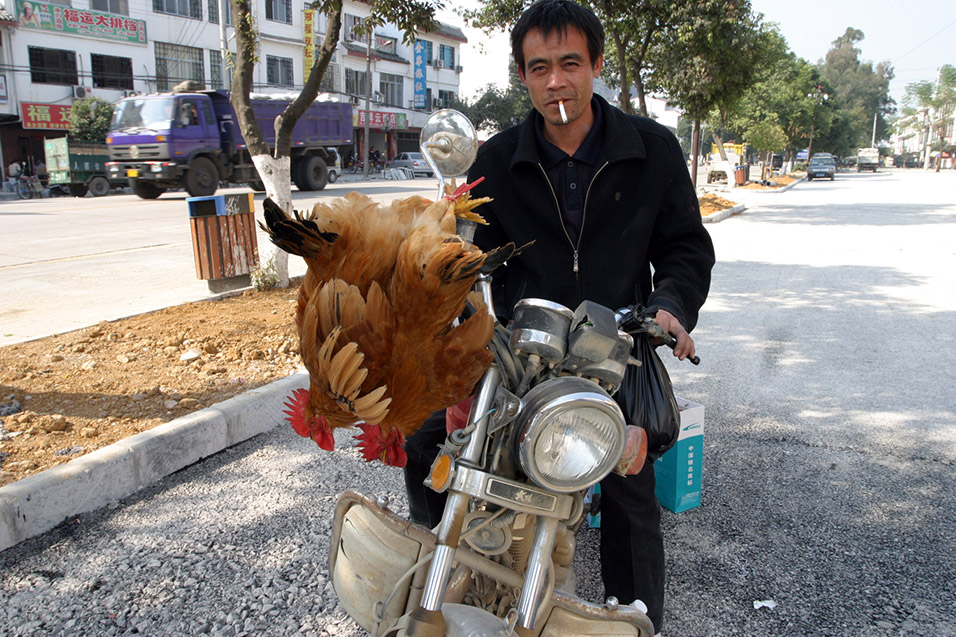 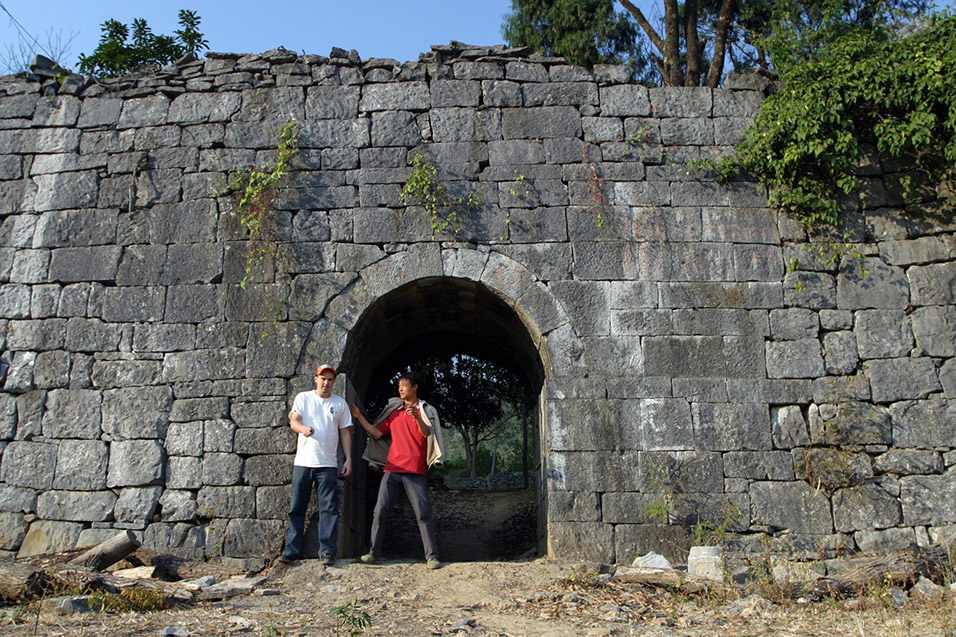 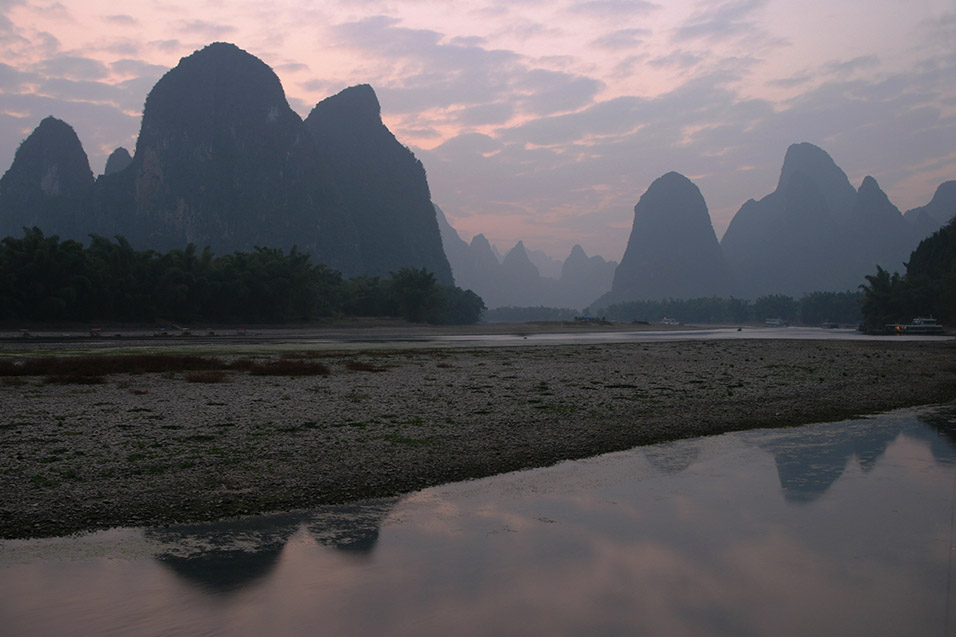 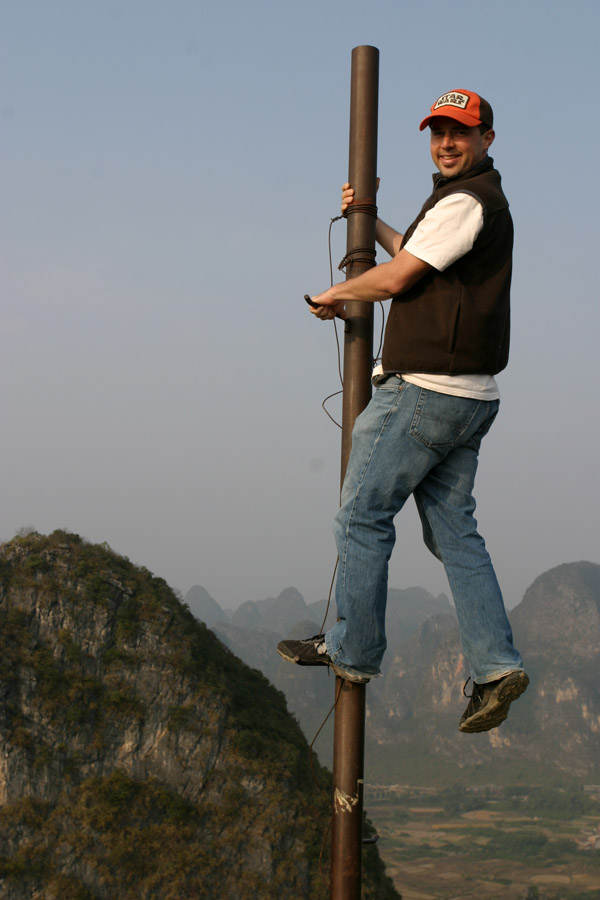 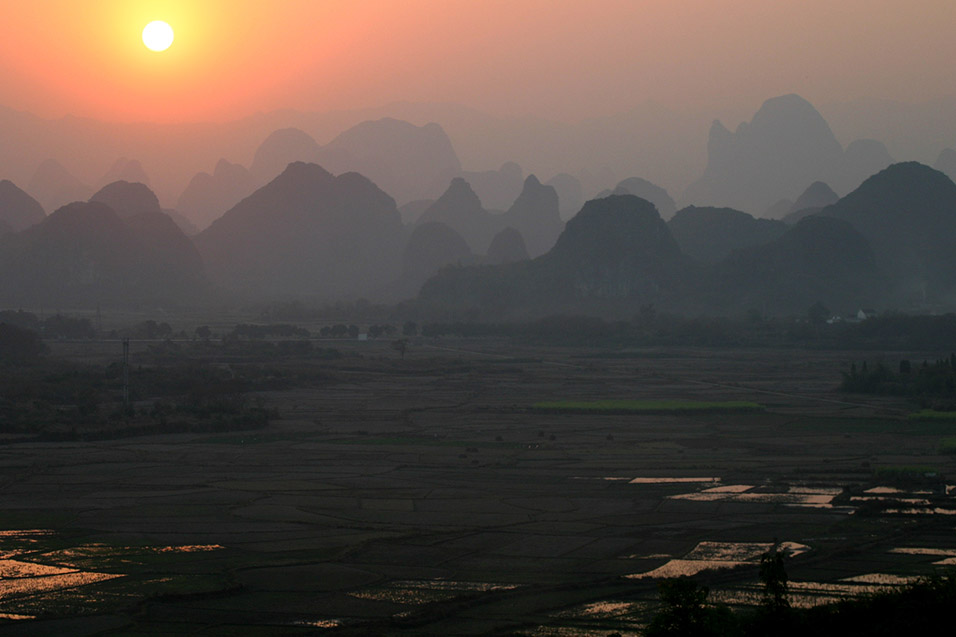 Yesterday, Jeremy and I went out on a dinner date with some local Xiamen gals. Well, before the date, Jeremy suggests we arrive fashionably late. 10 minutes beyond our initial rendezvous time, we walk into a steamy Sichuan restaurant. Apparently, our gals decide to leverage their waiting time with their desired current appetite. So before we got there, they order a massive bowl of ma la (numbing spice) frog and a side dish of goose egg yolk tofu that arrives to our table the moment we arrive. The frogs weren't French style with massive amounts of taste-enhancing butter and garlic. Instead, they were pulverized bits, each bit of chewy meat plauged with shards of bone and cartilage. Lesson learned: Don't show up late to dinner dates in countries where they eat everything for fun.

After dinner, we all go out to a cool bar, and after that, we all go dancing at La Bamba. But La Bamba is dead tonight so instead about 10 of us go to a small night market down the alley and the drinking begins. I guess we are are too noisy because the waiter is complaining about the noise and asking us to keep it down while simultaneously contradicting his wishes by constantly forcing us with more and more bottles of beer. A bit paradoxical indeed, but then again what isn't in China?

After about two hours, I get hungry. At least 3 food stalls surround us, and I pick the closest. You know, you would think the culinary-adventurous Brian would have found at least one thing to look good in the drunken state. But no. Nothing. I almost give up, but in a last-minute stroke of humor, I opt for the variety plate. $1.50 and three minutes later, a waiter serves our a table a huge plate of duck brains (in the skull with the beak), chicken feet, duck feet, bird organ medly, pork fat-n-skin, pork feet, snails, and highly fermented bamboo shoots. It was a laugh, and I thought the food would go to waste, but no sooner did some of us start devouring the food. For instance, a British expat grabbed a chicken foot and said this is how you do it: He plopped the entire thing in his mouth, toe nails and bones and all, and just starts grinding away. (Chicken toenails are nasty and nutritions, I guess.) A few minutes later he spits out a bulbous ball of mush on the floor. Some Chinese girl picks up a ducks beak and begins slurping the brains out of the skull in a very similar way we eat artichoke flesh from the leaves. She even gets the eye ball. Yucky. I try a bit of brain, and I have to say, it is a bit like foie groi. But the idea of eating "duck thought" (as Jeremy calls it) grosses me out to shivers and gags. Nonetheless, the entire plate gets devoured. Moments later, some amused drunk Chinese guys invite a few of us over, and they have a whole plate of duck brains. They motion to us. I take a defensive step back but the same British guy that was eating chicken feet, runs over and devours like three duck brains as if they were artichoke leaves. The Chinese guys laugh, offer more beer and all I can think is oh God.
Luckily I make it home that night.

I visit the Zhongshan Hospital of Xiamen University for a check up. I am given a translator who walks me through the various rooms, and it seems we are cutting some lines, especially the cashier line.

In China, blind people often give massage. It is a great idea and one the we decide to utilize tonignt. But instead of a relaxing massage, I was given thorough medical therapy to the point where I had to say "too strong" at times. This is something I never tell other people. Without even telling the blind massuer, he knew I was a lefty because he found more muscle knots in my left shoulder and arm. "Ni shi zuo piezi ma?" (Are you left-handed?)

At around 10:30P we head out to go to our usual Thursday hangout at the bar affectionately called The House. It is actually a great bar in an old Portuguesse colonial house with free pool and 10 yuan Sam Adams — an incredible deal at a bar considering the shit Chinese beer is triple at most other places and I can't even find Sam Adams at any other store in town. Before we go, we decide to eat some chuarn. As we are ordering, a group of Chinese guys sitting down at a table invite us over. We join the three locals and they begin pooring us beer while ganbei-ing us nonstop. More food is ordered including BBQed fish, octopus, ginko squares (bai-guo), eggplant, grassy onions and lamb. One of the locals informs us that he has won 3rd place in the Tsingtao drinking competition and subsequently won 50,800 RMB — a hefty sum. He then begins ganbei-ing us with a pitcher of beer. For every glass of beer we consume, he drinks a pitcher of beer. It is amazing. What is even more amazing is that at our table is a mini-keg of beer that cost 40 RMB (or about $5 USD.) After another hour, 5 more cups of beer on my end, and 3 more pitchers of beer on the champions end we dust the keg. We decide to go bowling, but the bowling hall is closed so we end up at a pool hall with young Chinese girls racking up our balls (Please, no pun intended.) After about 5 games, we call it quits. It is, afterall about 3:00A.

The great thing about verical white-tiled buildings is when you are looking at one, you are most likely in the heart of China. Such is the case in Xiamen, which is an open-air museum for white-tiled and blue-tinted window masterpeice buildings. Most people find them quite ugly, but these survivors of Chinese 1980s architechtural history provide some insight into the way China thinks about things. First off, why tile your building in the first place? The most simple answer I've received from the question is: face. The owners and renters of buildings that are tiled gain face by linving in and owning tiled buildings. The reason for this is because tiles are somewhat expensive. Today, I bought 10 white vertical tiles for 2 RMB. But look, an entire building would cost thousands of RMB in tiles alone (and then installation costs) because some buildings could contains hundreds of thousands if not millions of tiles. The tile game goes so far as som buildings having tile only on the sides of the building that are facing the public view.

Today we met with the founder of Koryo Tours and watched a new movie called Crossing the Line about American defectees to North Korea during the American/Korean War. It was very interesting and a good slice of the Xiamen expet scene showed up.

I left Yangshuo today after eight blissful days there. My next stop in Guiyang did not have a direct train today, so instead I opted for a four-hour train layover in Liuzhou, an industrial provincial town in central Guanxi. On the train to Liuzhou, I met a goofy girl name Danny. She too was waiting in Liuzhou, so together we explore the bustling street life of the city. In one market area, we find a butcher with two cute dogs in a cage out front. I do the math and gasp. These dogs are to be eaten, soon. I ask Danny if she eats dog. "If you eat the dog in winter, you don't feel cold." I nodded. The problem here was these were not mangy barking ugly stray scar muts. These were real nice whimpering real licking dogs with dog feelings for a warm home with kibbles ‘n bits. What is even more alarming is that dog butchers are usually hidden off to the side in the same place where other contreversial aspects of society take place. But these canine butchers were proud and in plain view for everyone to salivte over.

I don't quite make it to Fenghuang, but instead end up stuck in some small 4th-tier Guizhou town named Tonsgren. The town is quite pleasant, being situated on a large river. I am able to get a great room for 80RMB at the 3-star Clean Mautain Hotel. (That's Clean Mountain for those of you not fluent in Chinglesh.) The funny thing is, no matter how nice the hotel the difference between the hot and cold in the shower is the same. What unit of measurement is smaller that a millimeter? Well, whatever that is, that is the amount you have to turn the shower faucet to go from scalding hot water to frozen slush. It sucks because it is next to impossible to find that perfect showering temperature. Oh well, at least the room is nice.

Here is an exerpt from the hotel's serivce directory:

General Manager's Address
Ovation you come tongren ,thanking you to come the jingshan hotel!
Provided our service item that wine shop have in this guidebook, and facilities inside the wine shop.
The heart of ai hopes you during the period of wine shop over of delectation.
If you return additional information in demand or helps, please with the wine shop the big an assistant maager contacts.
We believe you would at here pleased degree over fine time, and the ai heart heat slices the anticipation you to come the jingshang hotel again.

English aside, the hotel is great and the staff is helpful. Next time you find yourself in Tongren, please visit. But, don't come expecting a wine shop. I never found one.