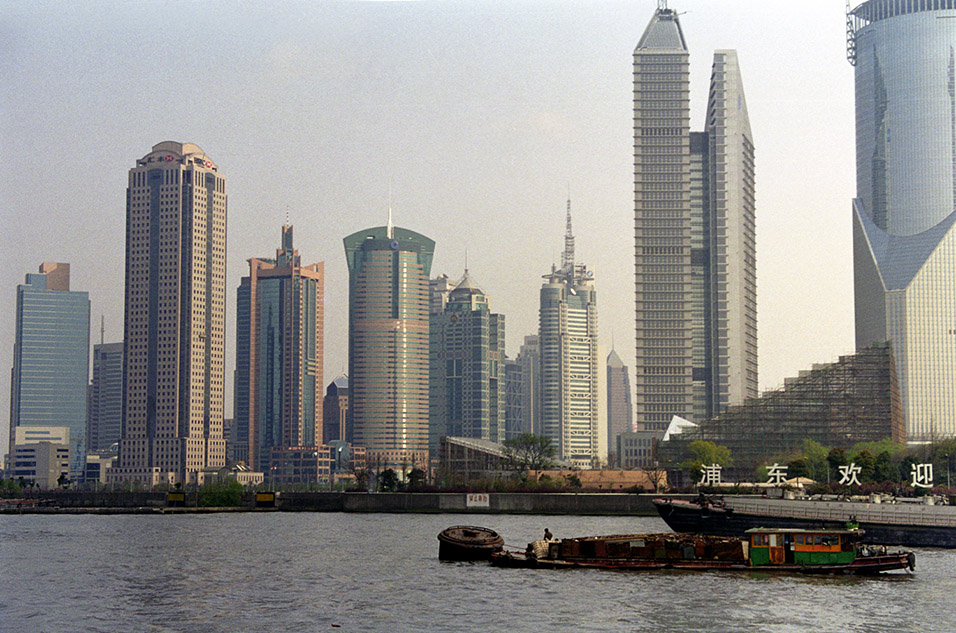 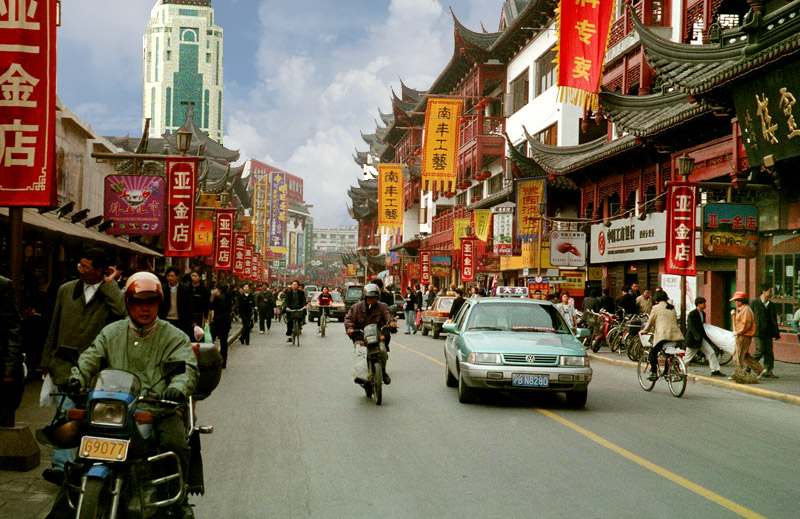 I wasn’t blessed with the best light during my 2001 China trip. (You’ll hear me bitch about it again in the Great Wall section.) So what is one to do when the light isn’t golden? Photoshop, for starters. I’ll admit, the sky in this photo wasn’t there. This sky is probably from Africa somewhere, maybe Madagascar or Namibia. Additionally, levels were enhanced and even exaggerated (the building in the skyline was a mere haze, though at least it really was there.) Lastly, add a little color balance and hue saturation and wallah. 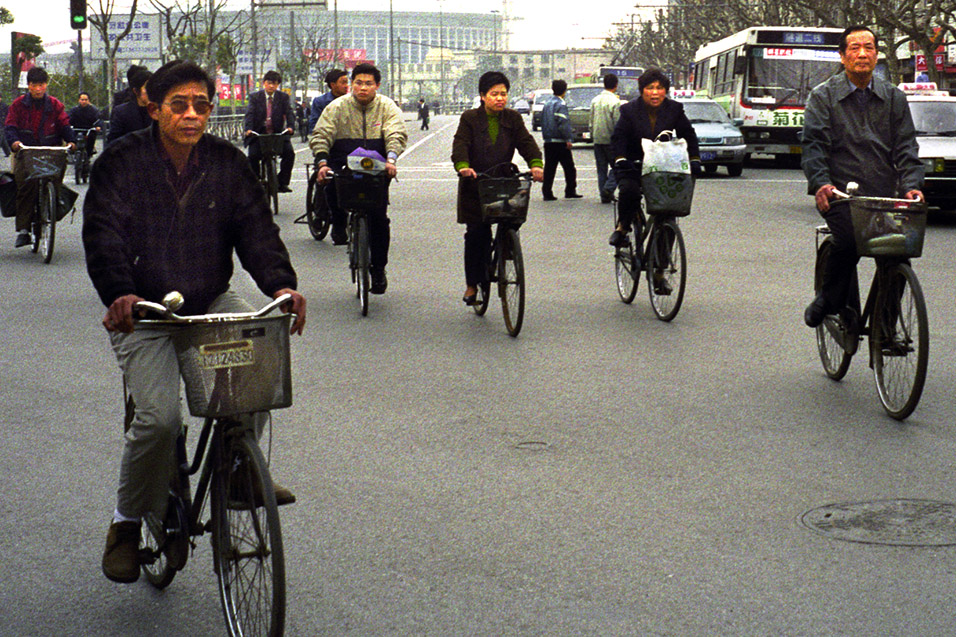 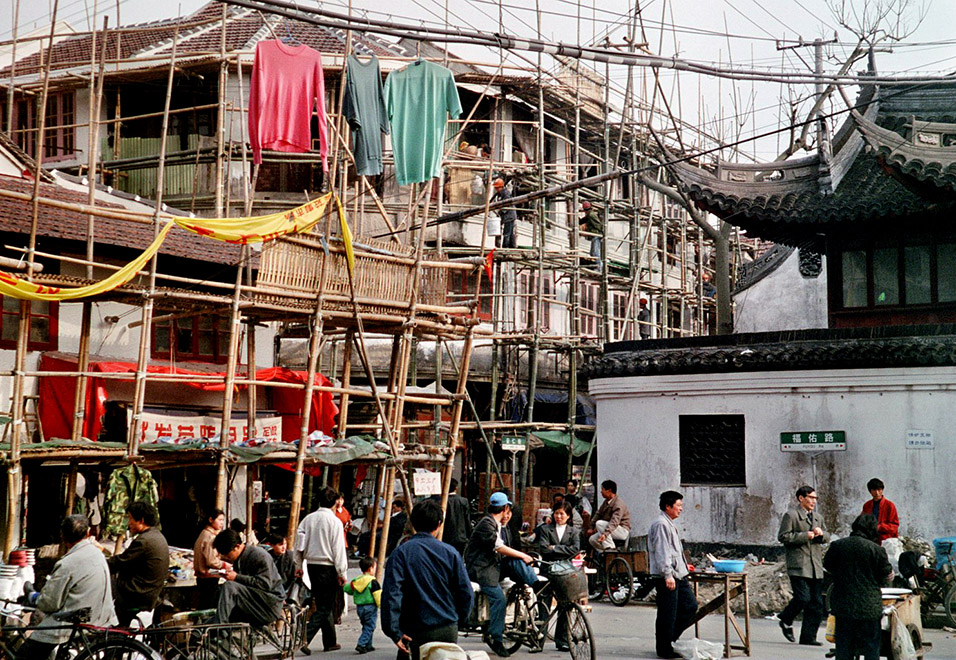 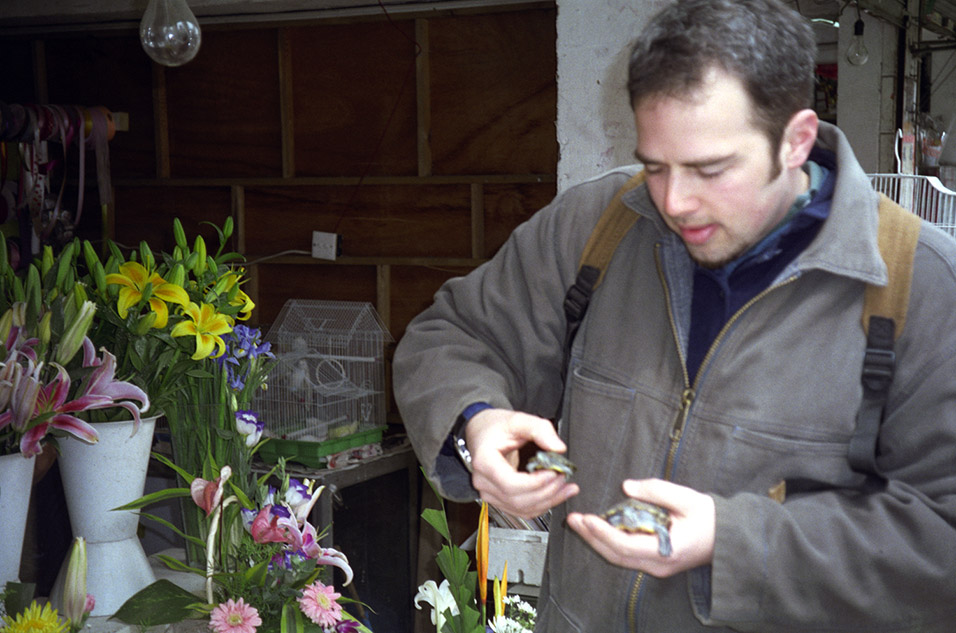 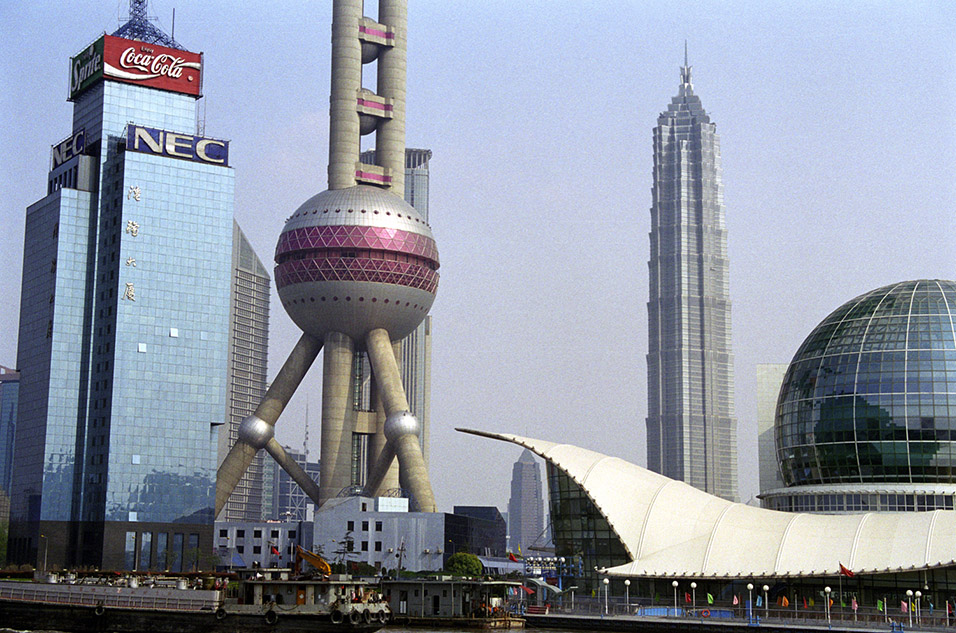 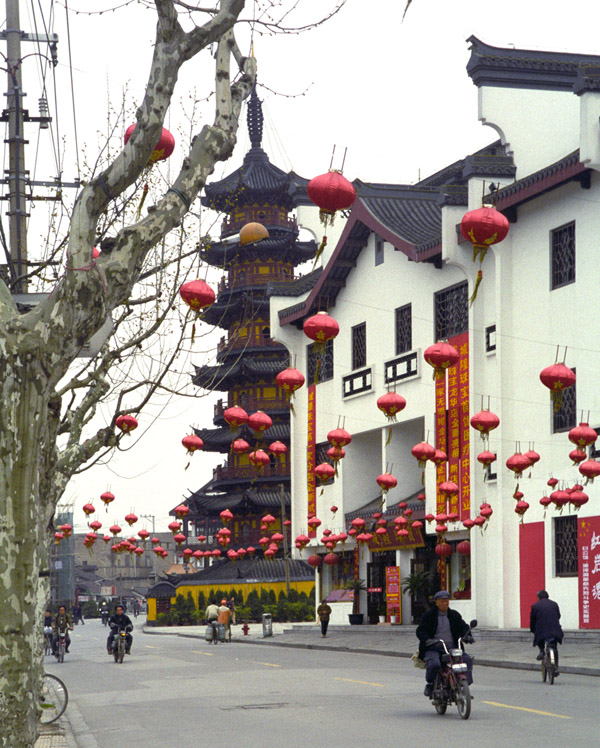 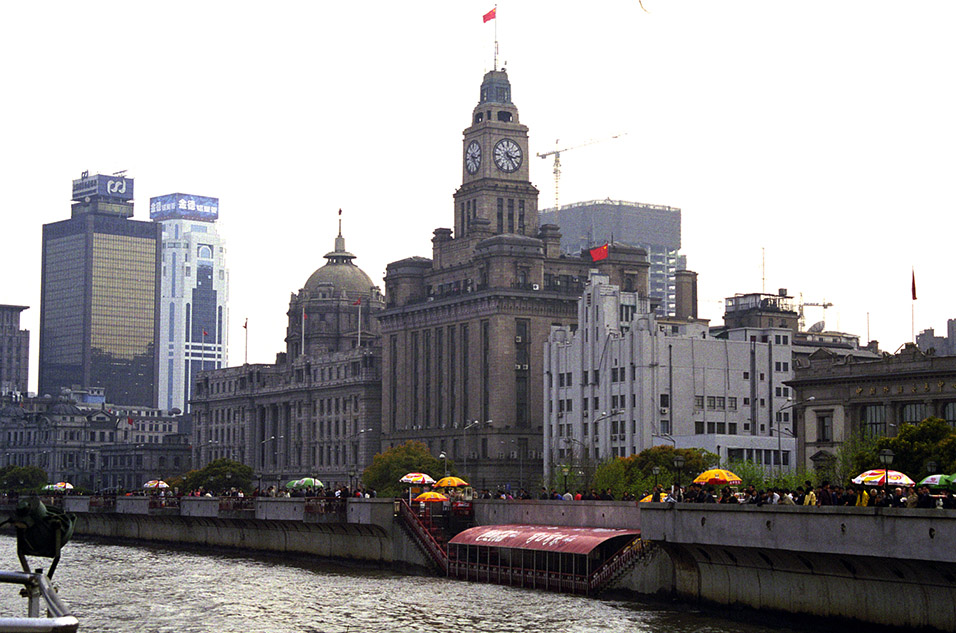 View of the Bund from my Huángpǔ River cruise, China — March 2001

Starting left to right from the domed building: No. 12 The HSBC Building; No. 13 The Customs House; No. 14 Bank of Communications Building; No. 15 The Russo-Chinese Bank   Map of the Bund 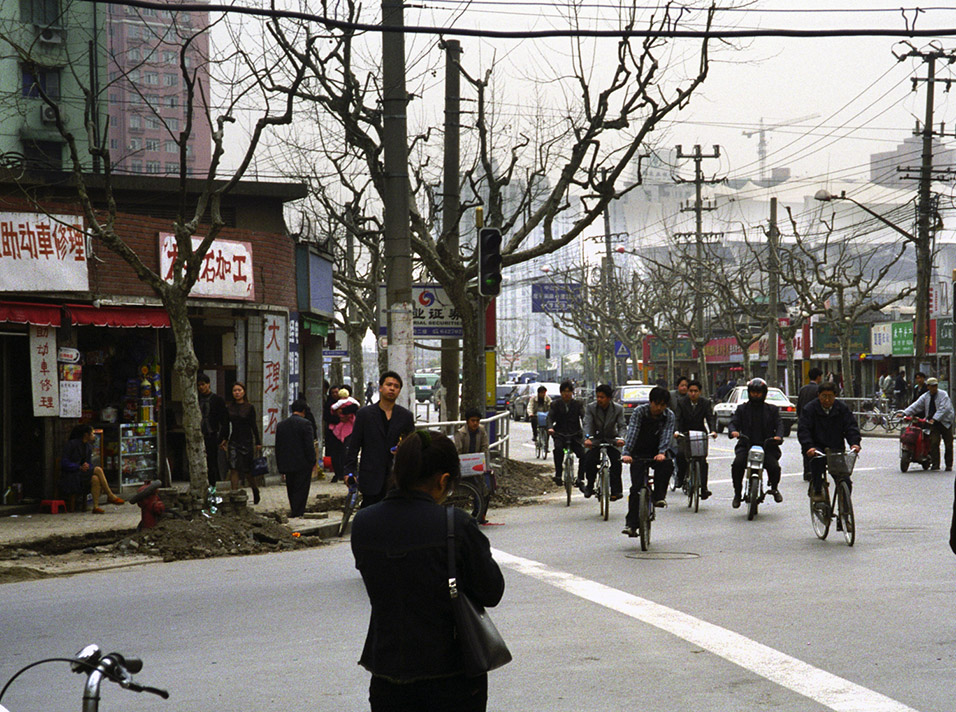 This neighborhood near Shànghǎi Stadium 上海體育場 has since been entirely rebuilt; the left corner is now a small park. 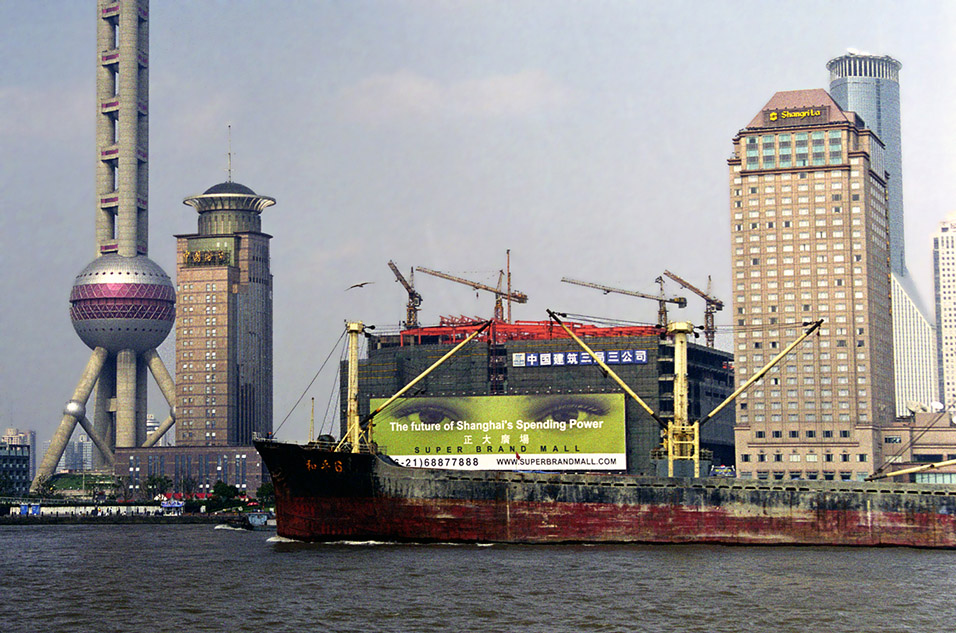 Are you down with www.superbrandmall.com 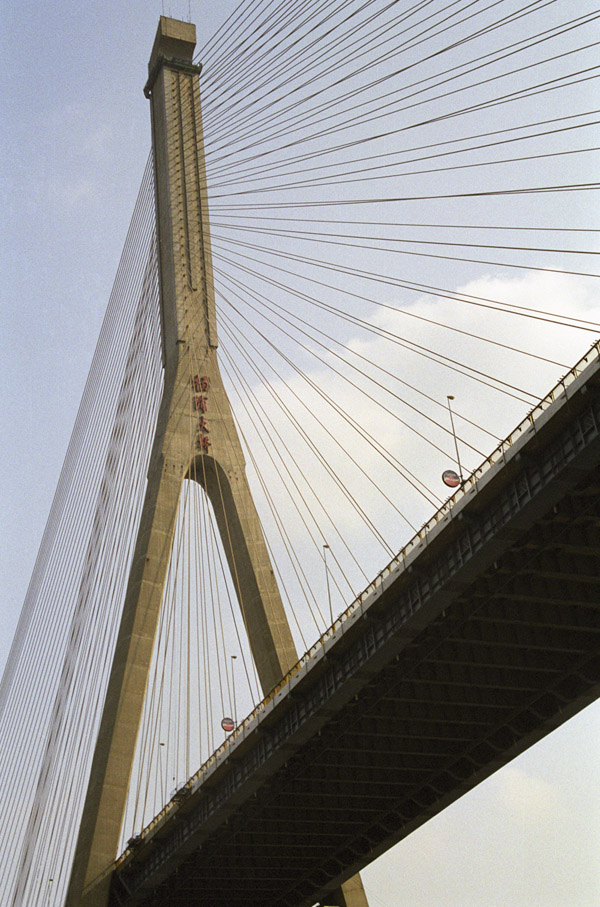 The Yángpǔ Bridge is a cable-stayed bridge built in 1992. 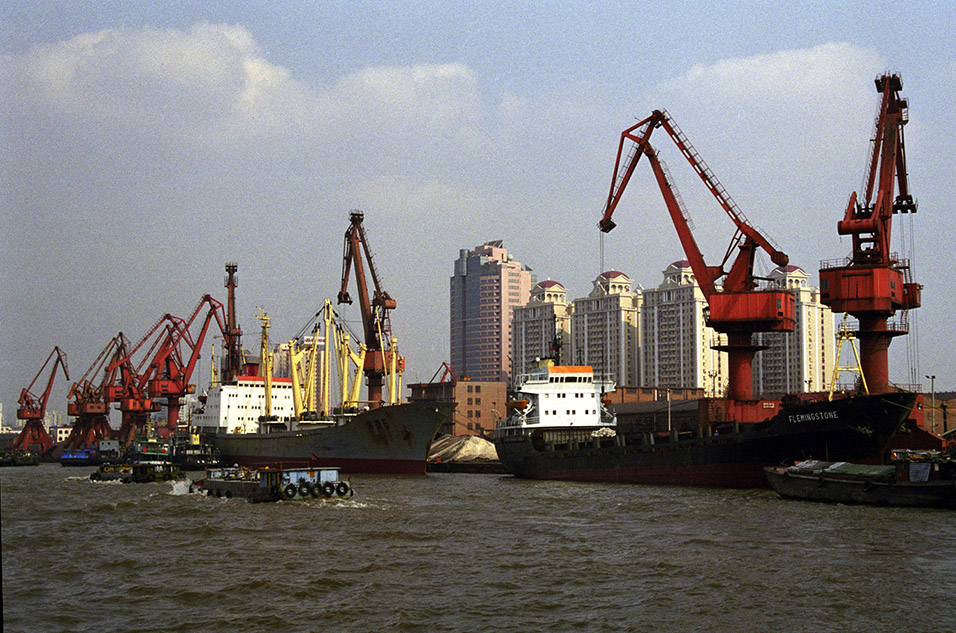 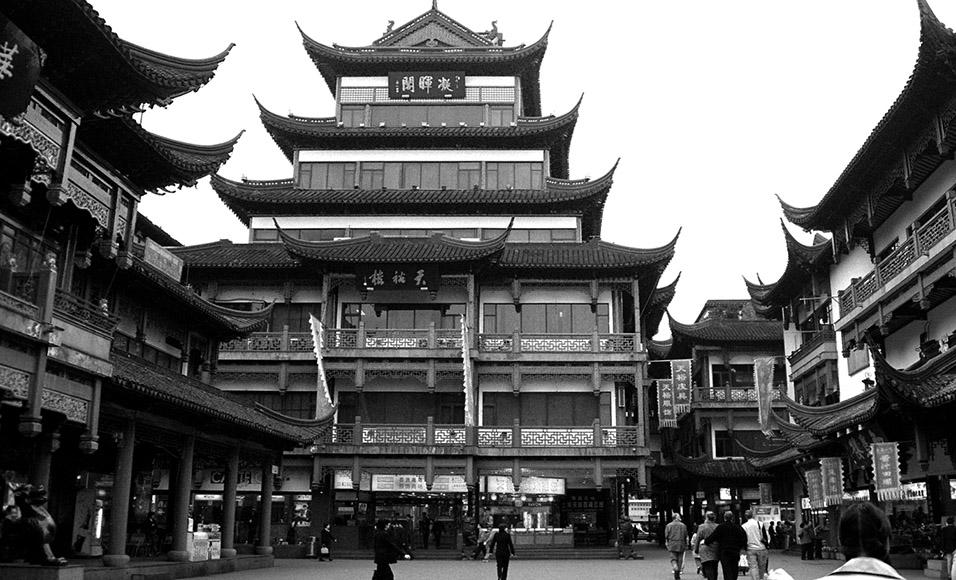 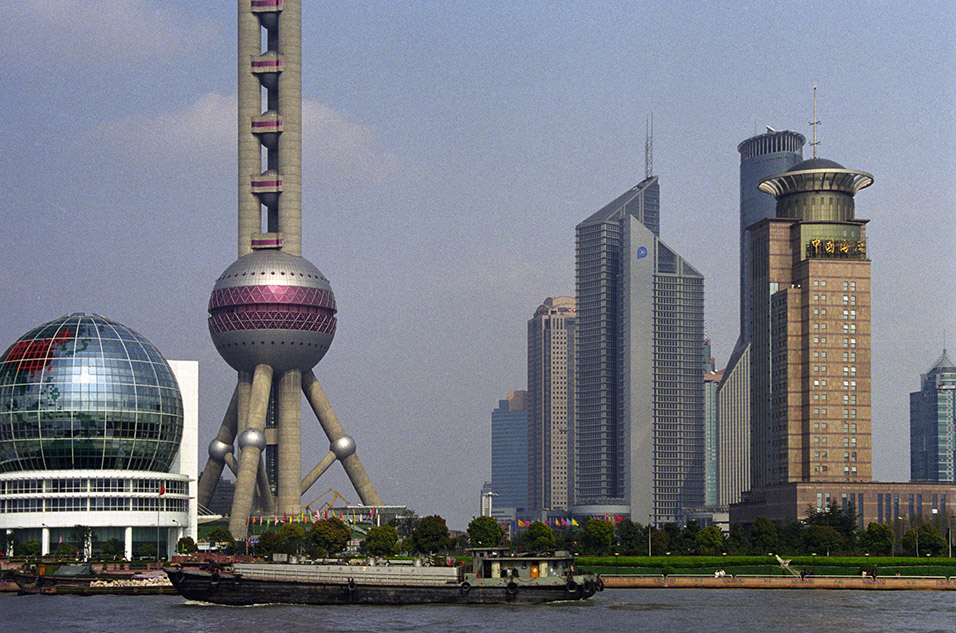 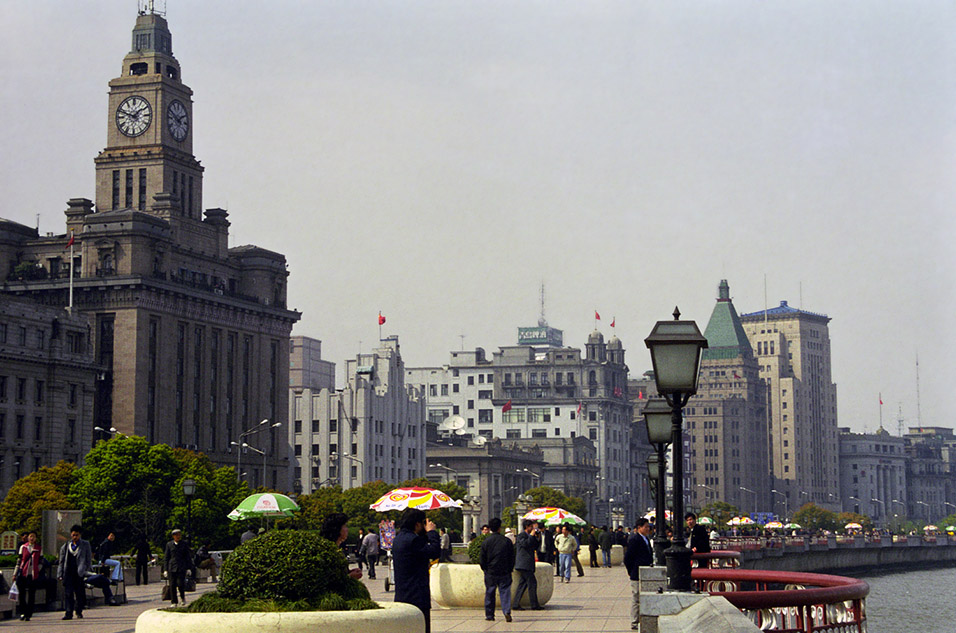 Starting left to right: No. 13 The Customs House; No. 14 Bank of Communications Building; No. 15 The Russo-Chinese Bank; No. 16 The Bank of Taiwan; No. 17 The North China Daily News Building; No. 18 The Chartered Bank of India, Australia and China; No. 19 The Palace Hotel; No. 20 The Peace Hotel (with green pyramid roof); No 23 The Bank of China; No 24 The Yokohama Specie Bank; No. 26 The Yangtsze Insurance Association Building   Map of the Bund 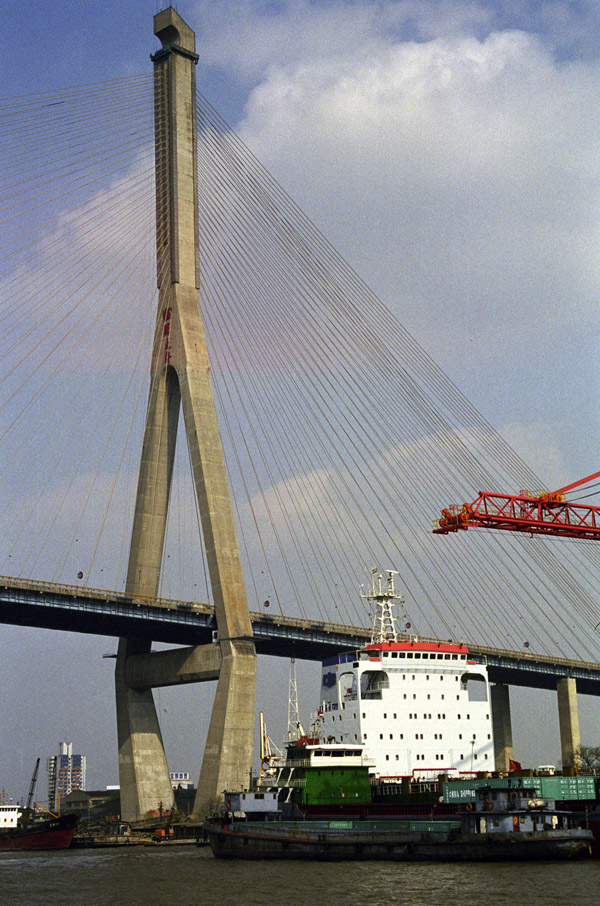 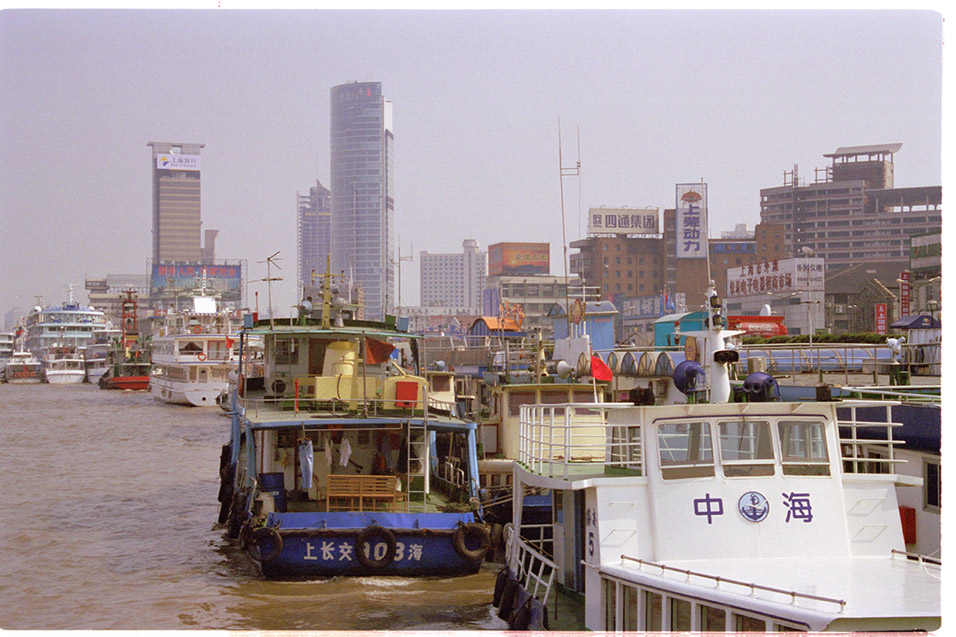 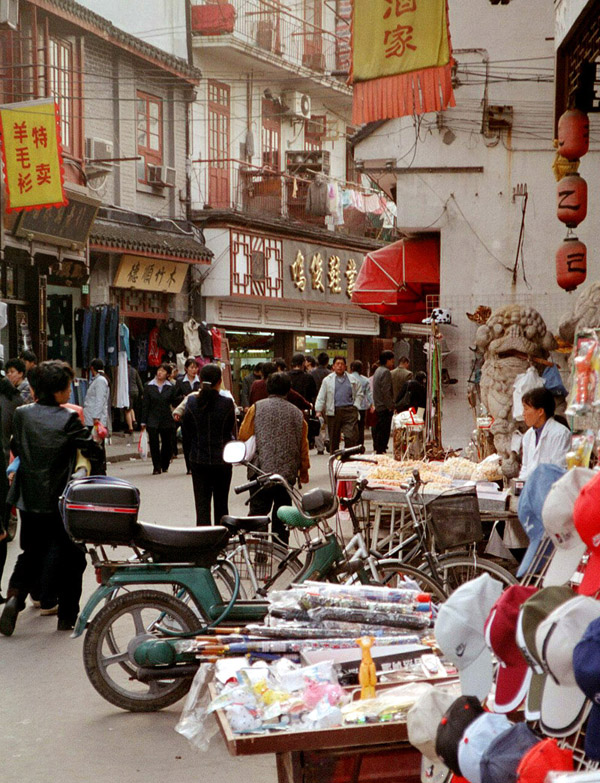 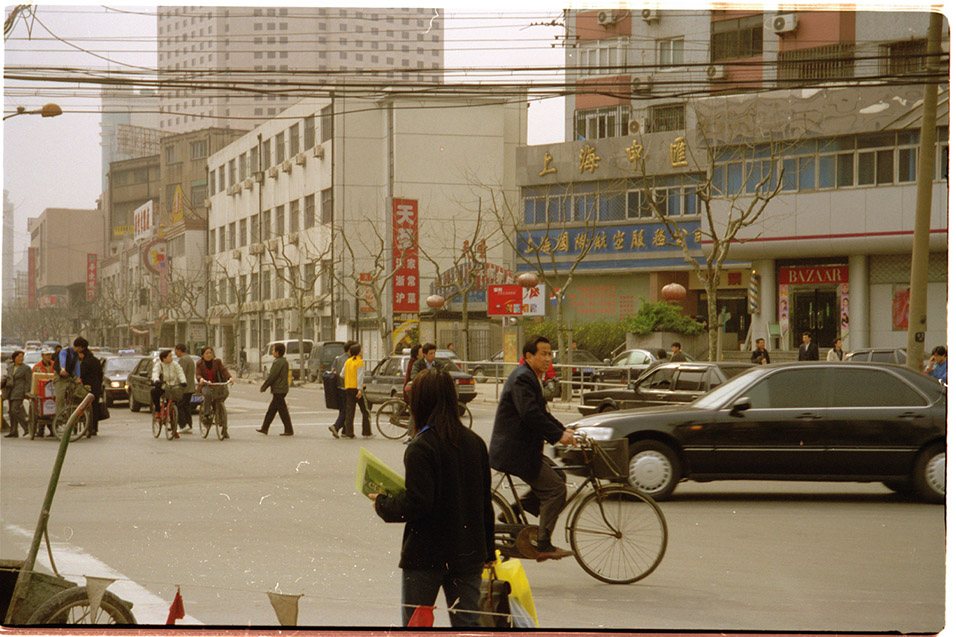 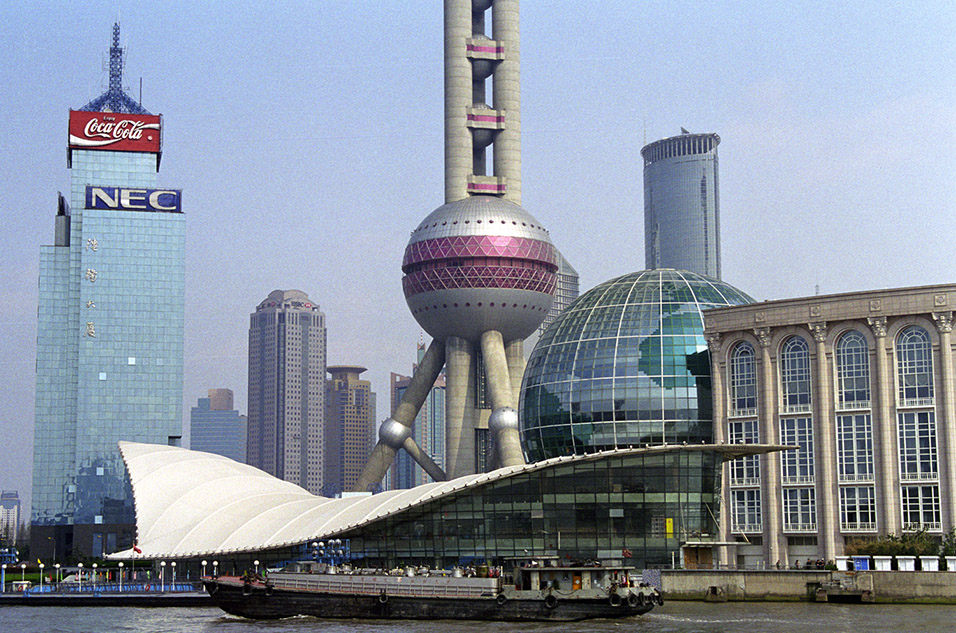 I arrive at the airport, but there is no Jeremy. Just tons of Chinese people. Everyone states, but no one is overly annoying.

I begin formulating plan II. If Jeremy is a no-show, I will have to go to a local hotel and email him. But for now I am patient. Hawks notice that I am by myself and begin offering the hotels. But these people are nice, not pushy.

“Hotel? You want hotel?” asks one guy, and then another.

Eventually a guy walks up to me. I expect the usual hotel query but am startled when this guy says, “Brian, where have you been? I have been looking for you?”

We laugh. Jeremy grabs my backpacks and hails a taxi. He speaks in Chinese to the driver. After several exchanges, the volume increases. My jaw drops as I hear Jeremy arguing (in Chinese) with the driver. I mean here is a guy that some 12 months prior didn’t even know how to say hello is now fluently arguing over the petty price of a taxi.

After several more exchanges, Jeremy starts walking away. “We are walking out of here; these guys are all going to rip us off.”

I am exhausted from the 20 hour journey to China, but excitement overwhelms me. I can't wait to explore the city, whether on foot or by car. And so we walk out of the airport to the surprise of many people. Eventually someone pulls over and offers us a fair fare into town. As we drive into town on an elevated freeway and I am surprised by all the tall buildings, some covered in white or pink tiles with blue tinted windows. The infrastructure is a lot more grandiose than I expect.

We tour Shanghai in the day. In the afternoon we head to the Shanghai railway station and buy tickets for China Railway T14次, 03车, 94号, for ¥179元.

“They didn’t have any sleepers left so we are taking a hard seat to Beijing.” Jeremy exclaims half boating, half hesitant as we onto the train.

Hard seat is no exaggeration, in fact our seat is more of a bench, with an uncomfortable vertical back, shared with Jeremy and a haphazardly-dressed Chinese man. In front of us is a narrow maroon linoleum table with a metal trash bin underneath. Across the table are three more Chinese men, who offer us occasional stares in between gulps of green tea and handfuls of sunflower seeds. Glass tea jars and shells crowd the table.

We depart Shanghai 上海 at 6:00pm and head north toward Beijing 北京. Jeremy begins chatting with the men sharing our space. I have no idea what they are talking about but enjoy a beer with them and try their seeds, which I quite like.

An hour passes and jet lag takes it’s toll; I have barely slept in two days and I become delirious. I need to rest my head somewhere but our bench is cramped and the table in front of me is now overflowing with beverages, piles of husked sunflower shells, playing cards and other random trash. I consult the train conductor and decide to pay $100 USD on the spot for a private cabin upgrade. Jeremy tries to join me but is denied by the conductor; apparently he has to pay as well. I don’t feel too bad for Jeremy and bid him goodnight.

I sleep solidly for six hours and feel fresh when I reunite with Jeremy the next morning as we pull into Beijing railway station.

In the morning we tour the Forbidden City and Yōnghé Lamasery. In the early evening we buy tickets for China Railway T21次 Tekuai Express, 12车, 08号下铺, for ¥327元. We depart Beijing railway station 北京 at 6:00pm and head south toward Shanghai 上海. We arrive to Shanghai railway station the next morning.