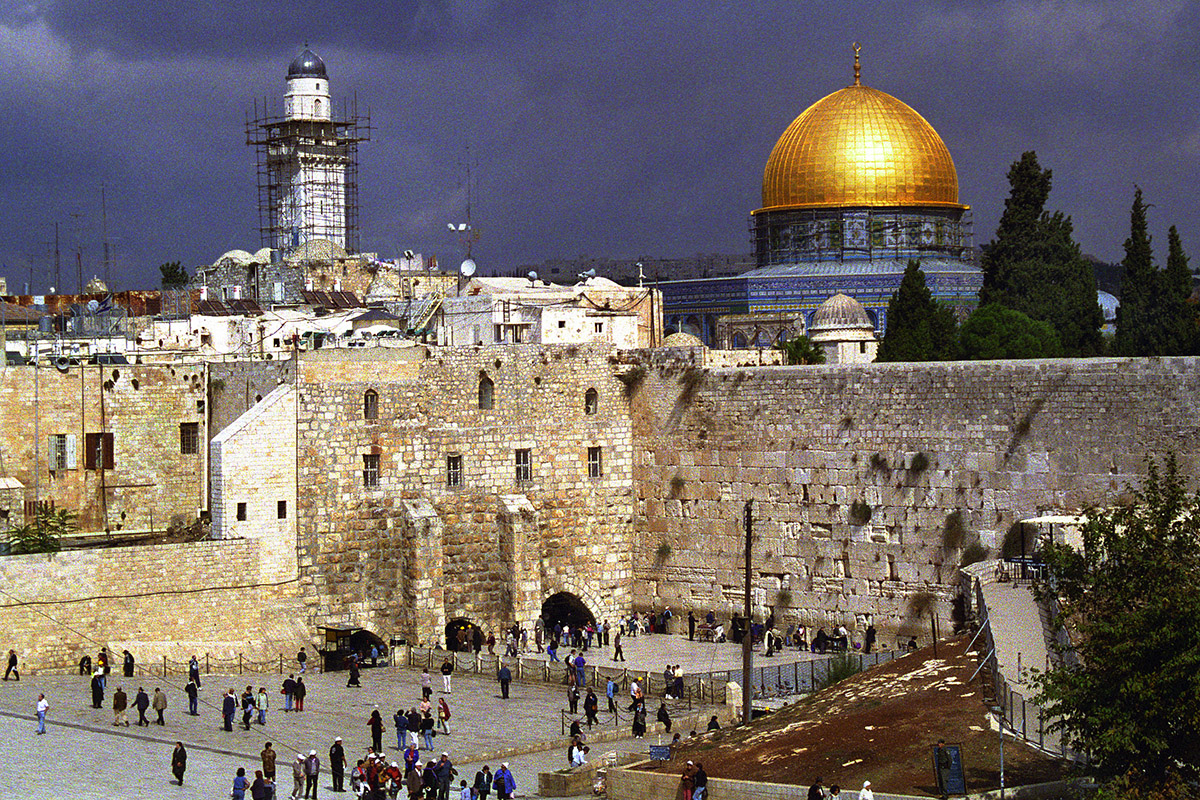 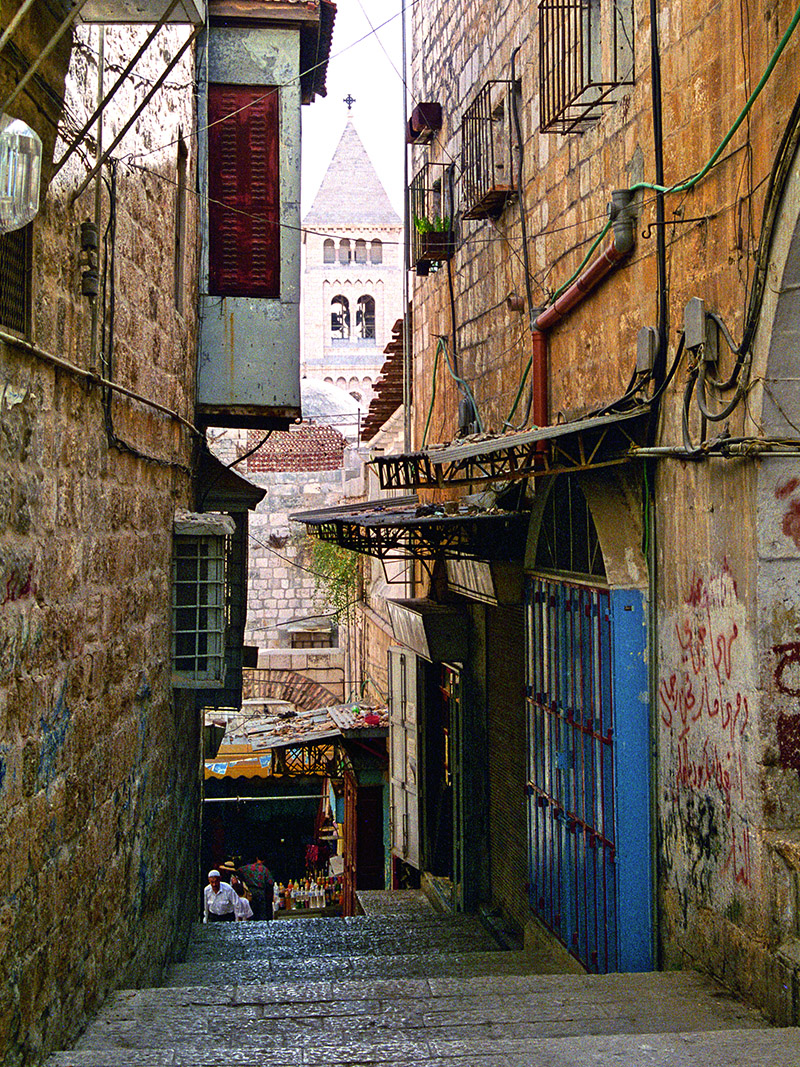 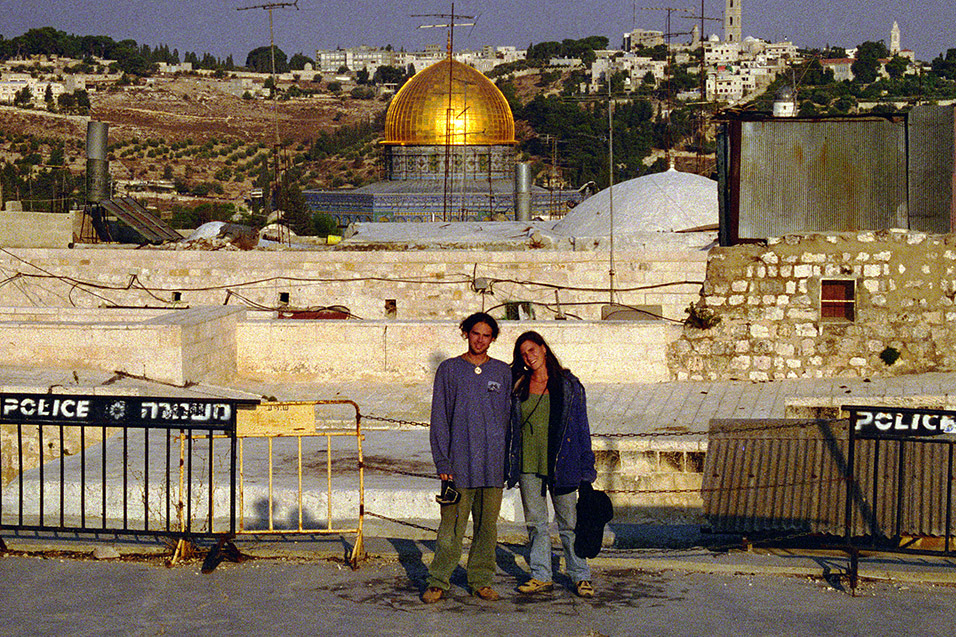 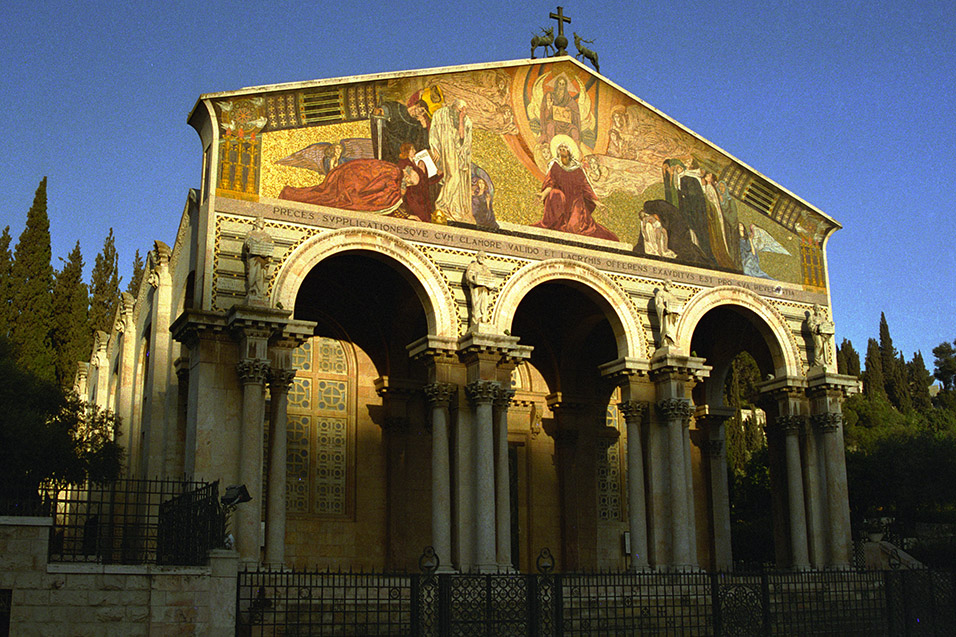 Church of All Nations (Church or Basilica), Mount of Olives, Jerusalem — August 4 1996 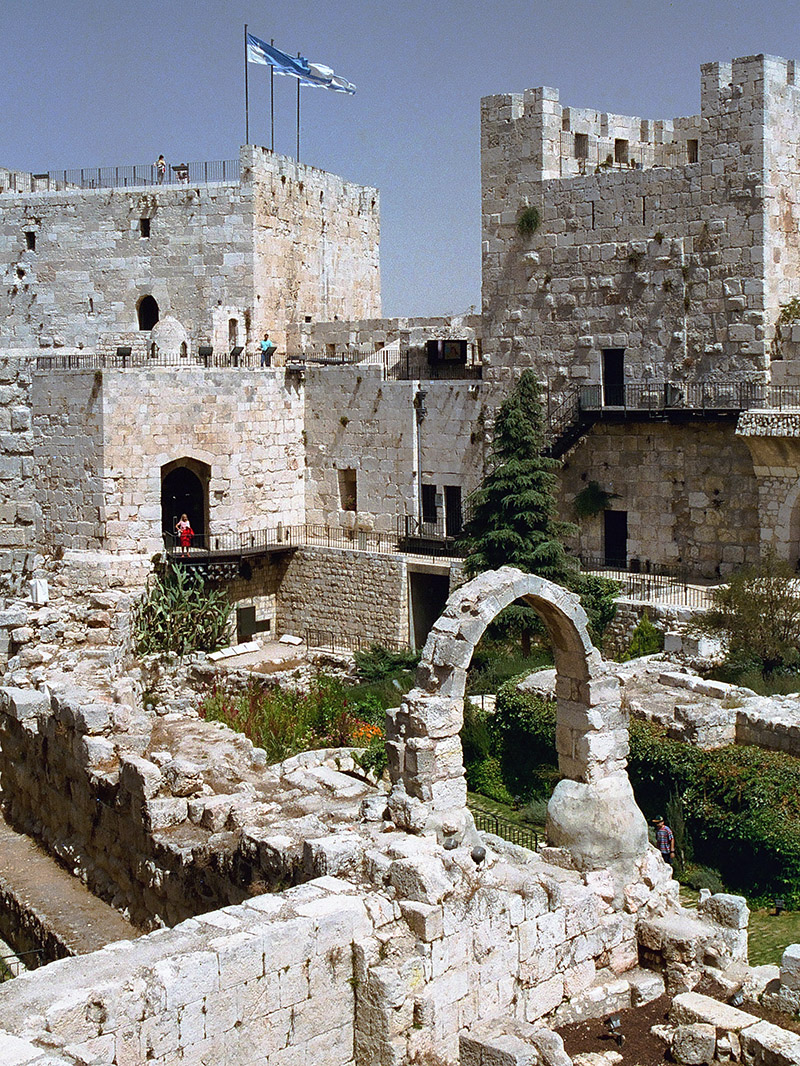 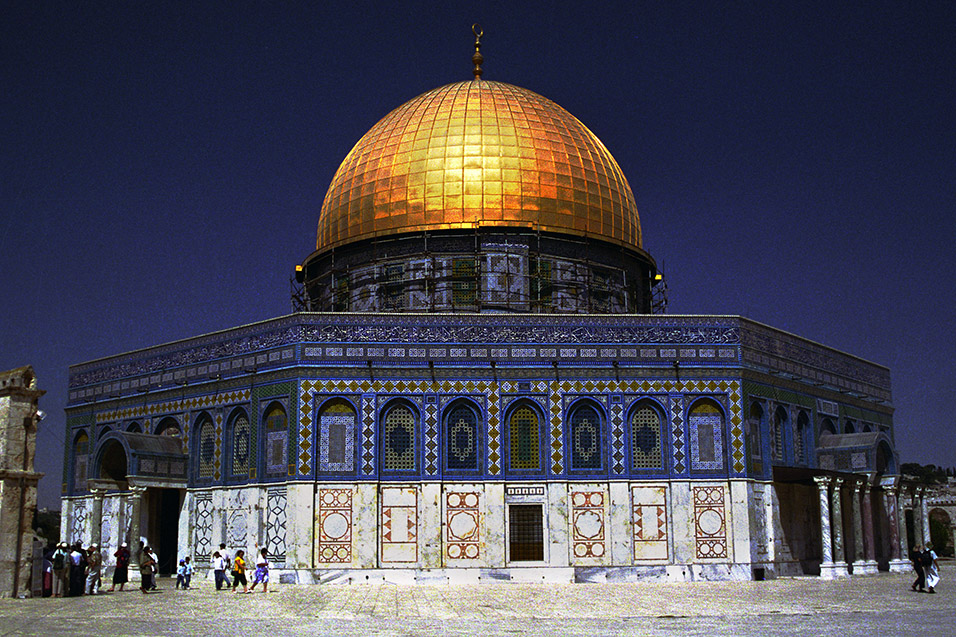 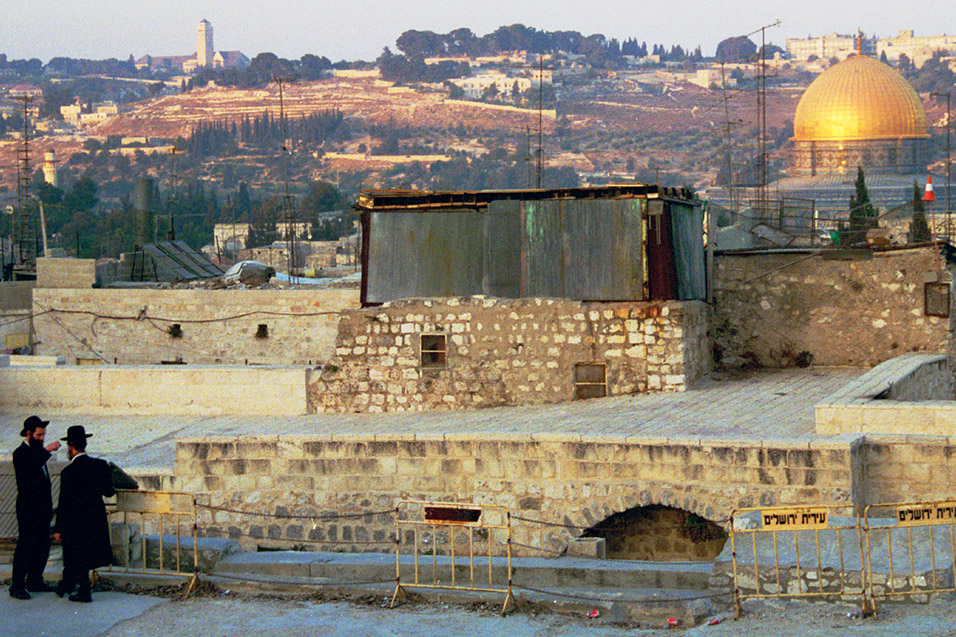 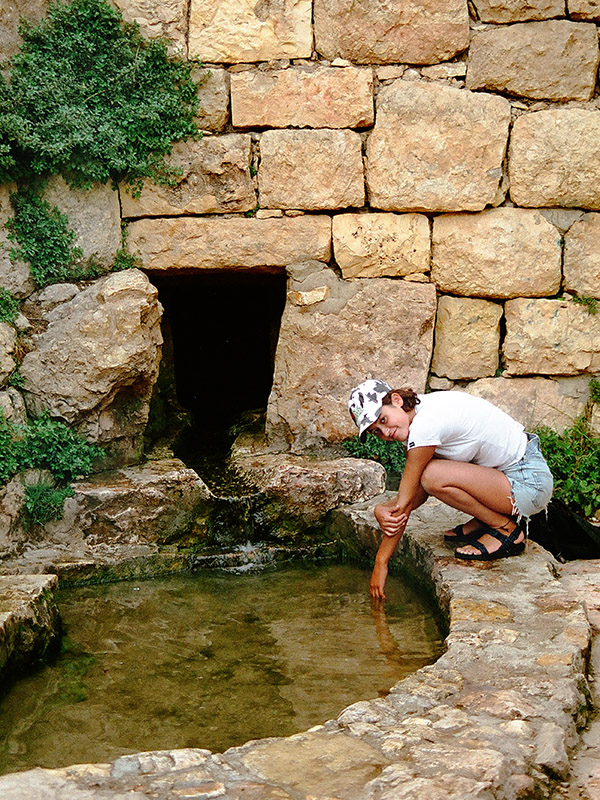 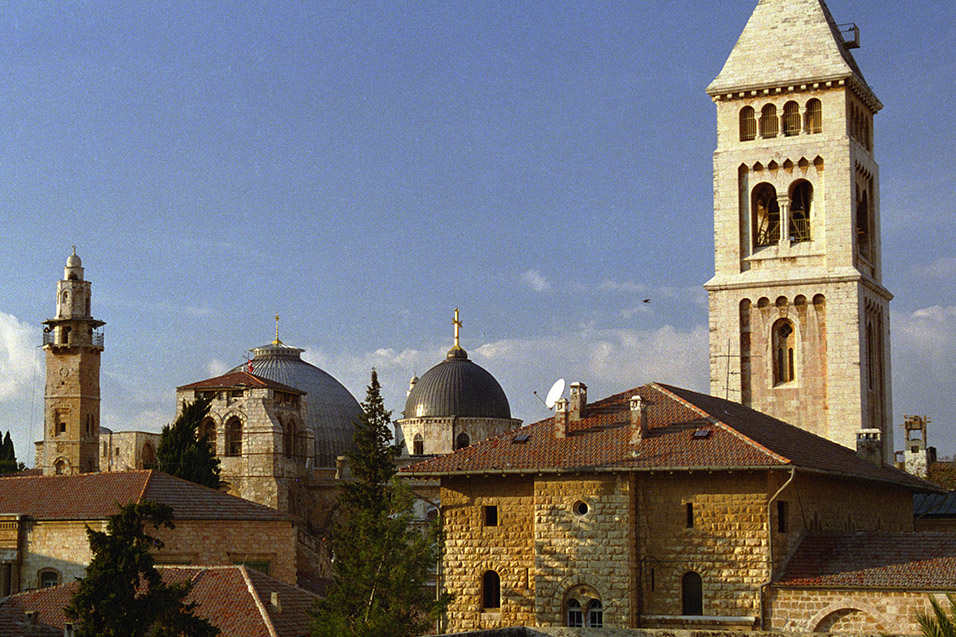 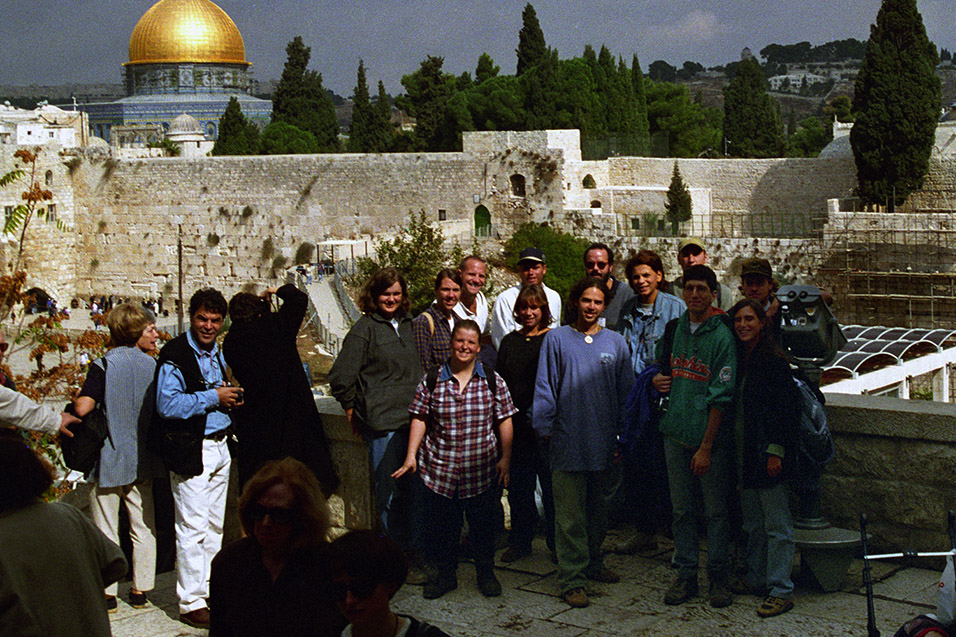 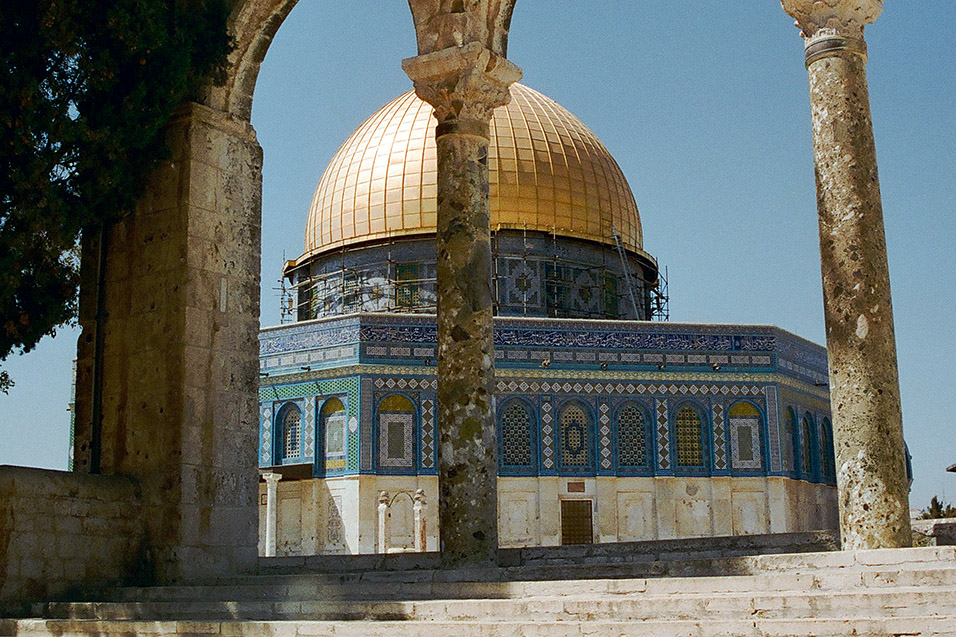 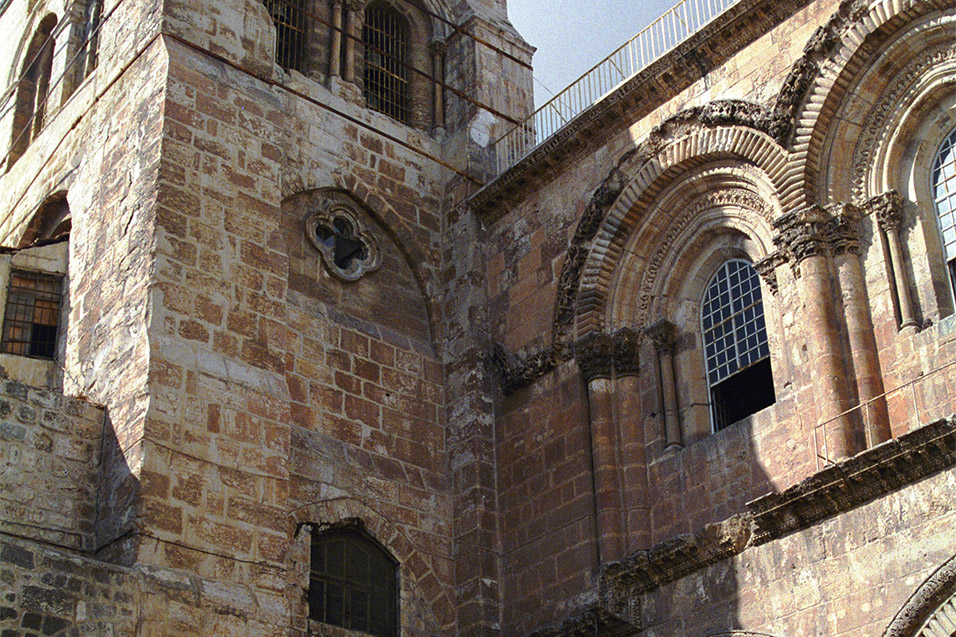 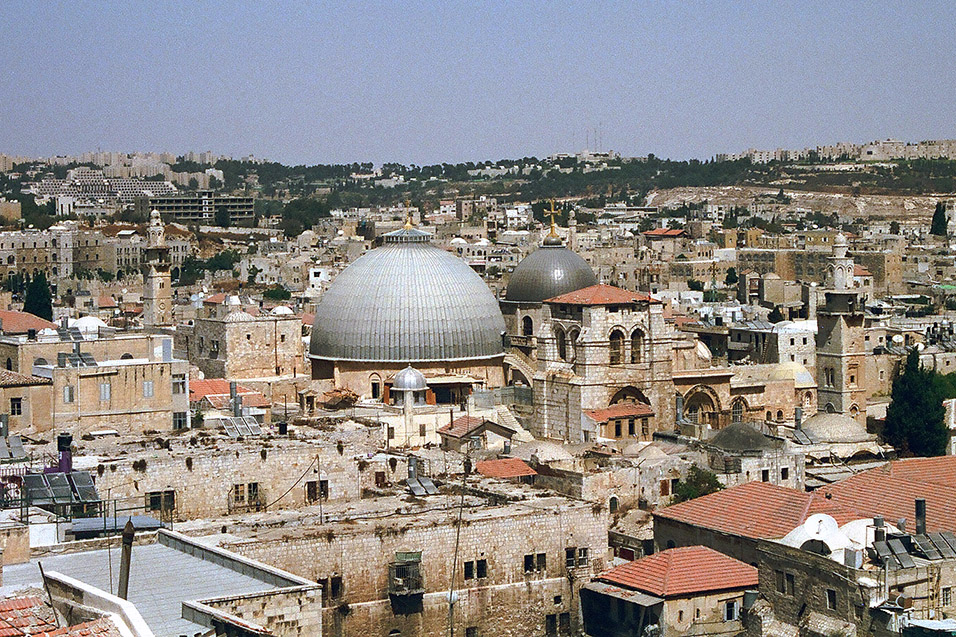 View of the Church of the Holy Sepulchre and surrounds, Old City, Jerusalem — August 4, 1996 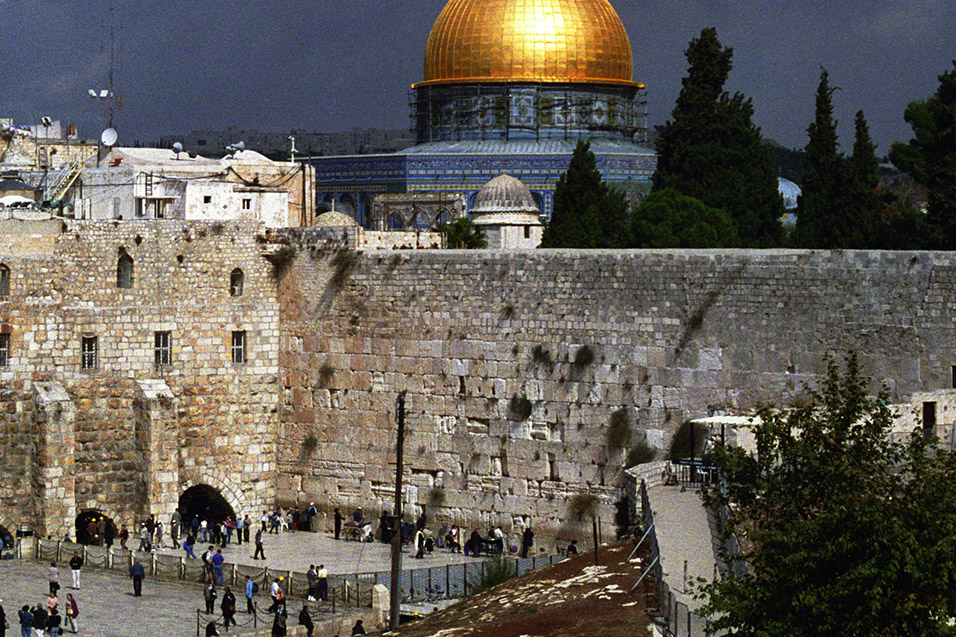 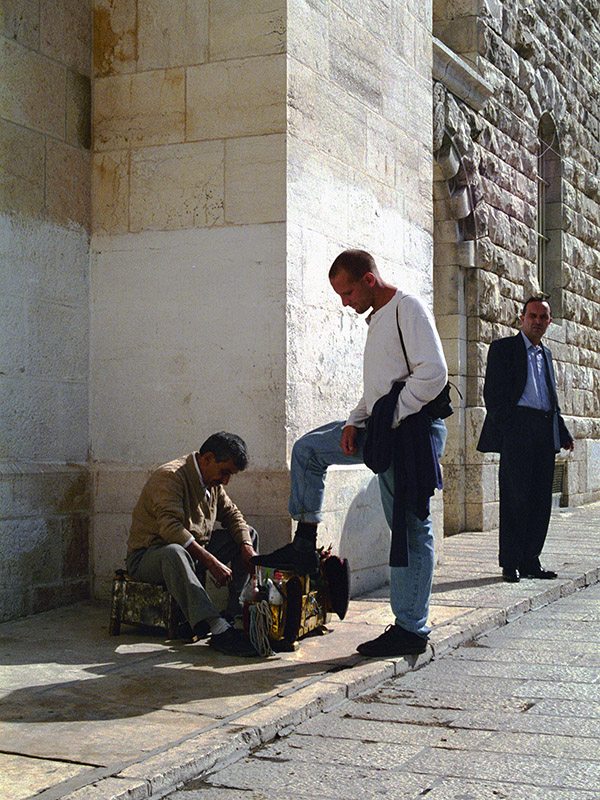 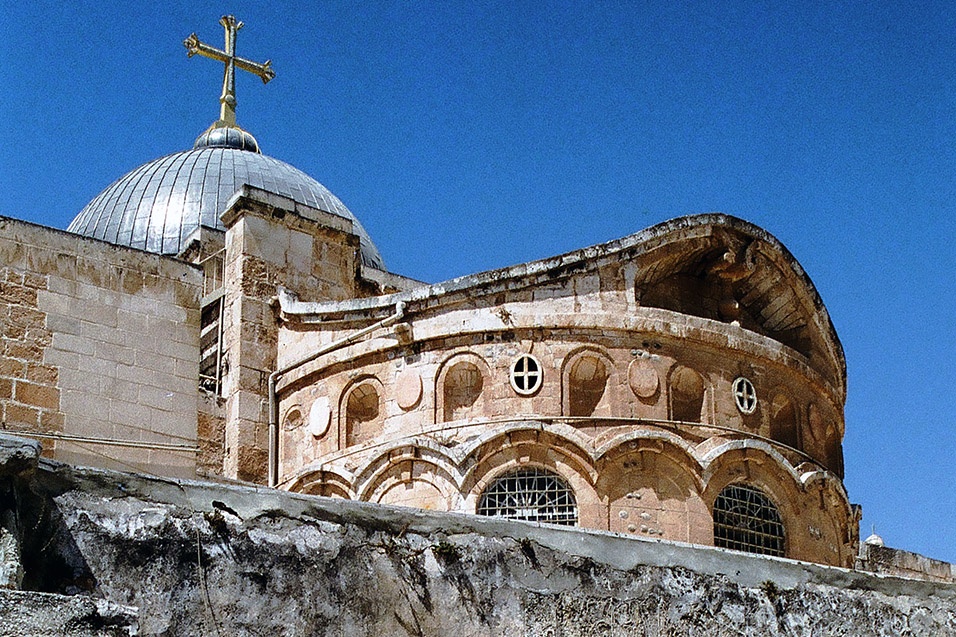 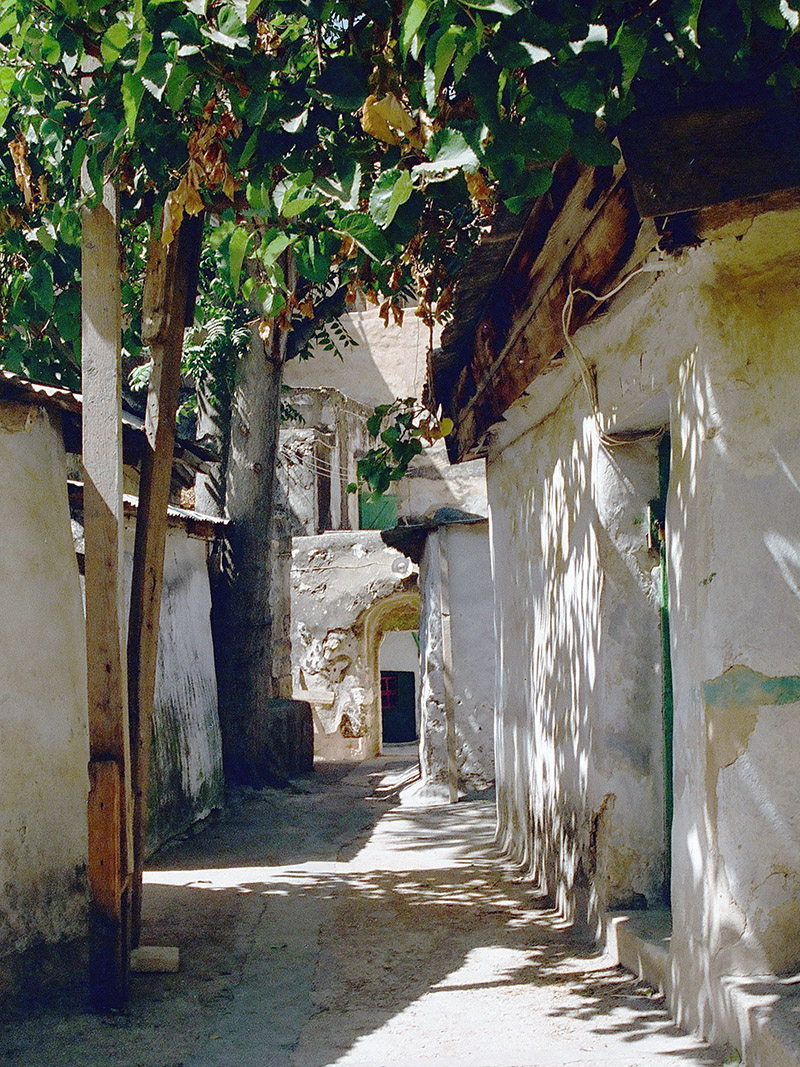 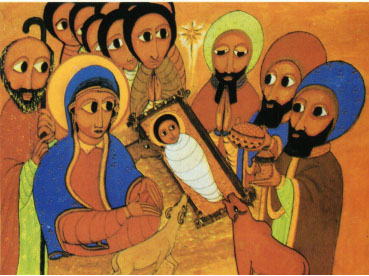 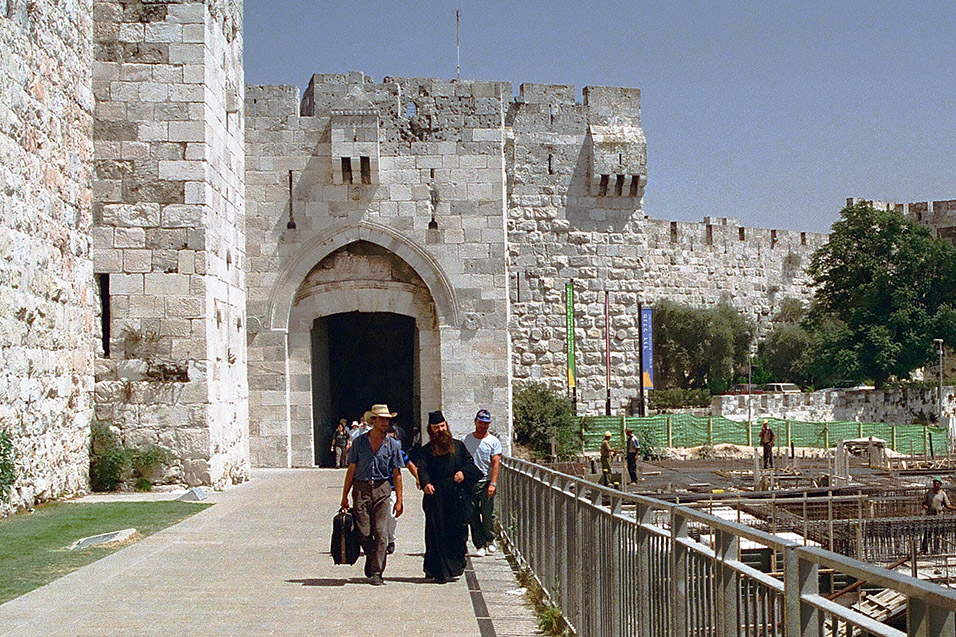 The Jaffa Gate is one of several entrances into the Old City, Old City, Jerusalem — August 2, 1996 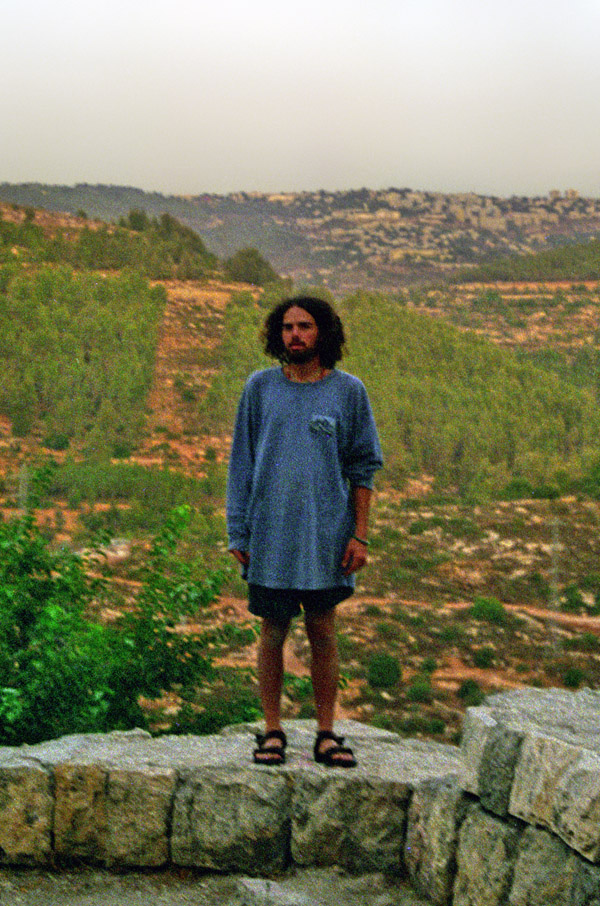 Today I arrived to Israel at 5:40 in the morning to Ben Gurion international airport. Thinking I would be stripped searched, I prepared myself for the procedures. But nothing — I just got off the plane, declared nothing in customs, received my luggage and left. No hassles. I didn’t even see one gun! I expected automatic Uzi submachine gun everywhere but not one gun visible. Before I go to the Kibbutz, I feel it quite necessary to briefly visit some of the main sites in Israel as to get a feeling of the economy, the geography, the people, etc. I feel this necessary as to witness the natural framework that kibbutz fits into.

Therefore, I will take notes and use this information in my thesis. My basic itinerary includes Tel Aviv, Jerusalem, the Northern Galilee, and Haifa.

The bus ride to Tel Aviv revealed a country quite similar in flora to Southern California. Similar geography — flat fields, freeways, buses. Except the heavy humidity unlike SoCal. If it exists in Israel, you can find it in Tel Aviv. The largest city in Israel, it looks a mixture of modern and developing countries. The architecture is atrocious. Everyone is talking on cellular phones.

Everything is written in Hebrew (Ben Gurion).
I think most items are produced within Israelis boarders.

People are quite rude. Everyone cuts in line in front of you.

Now I see guns everywhere. Many soldiers, men and women. Some have guns, some don’t. Why?

The car emission pollution is tremendous. It stings my eyes to walk down a busy street. Also, everyone is honking their horn. Noise pollution.

Products in the market, all in Hebrew. Are they made here? In a neighboring country? No neighboring countries would make these things for Israel!? The roads and building are falling apart as in Tijuana, Mexico. I like it here, nonetheless.
The Mediterranean, beautiful, blue.

O Jerusalem. Soldiers everywhere. Chaos. Rude people, friendly people. Humidity, beautiful. I am not going to find out much about Israel’s economy here, but — O Jerusalem… the Holiest City in the World for the Jews, Muslims, and Christians. Conflicts due to the Last Supper being in the same building as the Tomb of David, and the Jew’s 2nd Temple being where the Arab’s Dome of the Rock is. Lots of tension between Jews and Arabs. I had a knife held to me because of a disagreement I had with an Arab boy over a falafel. No more disagreements, Brian.

This city, architecturally, is the most brilliant ever, blows Tel Aviv out of the water.

Tonight is Shabbat, the Day of Rest, and do I need a rest, and somehow I found myself going to dinner with ultra-Orthodox Hassidic Jews. Thus my first interview. After walking through a Hassidic neighborhood in West Jerusalem, quite unbelievable, I find myself, and two others sitting at the table of Manoch and Mindy Rosenberg. Manoch wears a fury shrineal on his head with beard, clothes and everything. He has three kids. I ask, “How do you support yourselves?”

We eat dinner and Manoch seems just as interested in Global Capitalism as I am in Hassidic customs so we exchange ideas.

There is a law in Jerusalem that says that all the buildings must be covered with Jerusalem Rock on the outside. The whole city still looks biblical.
I can’t believe the Old City’s architecture, mazes of stone streets, arches, the Western Wall — most holy to the Jews. The dome of the Rock — 3rd most holy to the Muslims. Via del Rosa — most holy to the Christians. All within a 2-minute walk of each other, including metal detectors and security. The IDF has outposts everywhere here.

O Jerusalem. I will not forget thee. 36 empires ruled over you, thousands have died for you.
IT IS YOUR 3000 anniversary this YEAR! Happy Birthday.

Tiberias is 200 meters below sea level next to the Sea of Galilee and the humidity is the worst ever. I am grumpy; everyone is rude, everyone talking on cellular phones. Smog, trash on the ground, yet this place is holy to the Jews. Why do a people fight so hard for a piece of land and then trash it so utterly? I ask several people and they don’t seem to even notice the trash floating in the Sea of Galilee.

“We have too many other things to worry about than pollution.”

But I’ll tell you, Israel is a desert. It should not be this humid. The end result of car emissions is H2O vapor and OH- vapor in the form of humidity. This humidity is human made from cars and air conditioners, not natural. This is not good.
Israel, you have to worry about your environment.
LA smog is nothing compared to that of Tel Aviv and Tiberus.

I have to leave here.

I travel to the Lebanese boarder near Metula to the Good Fence where injured Lebanese are allowed to cross into Israel for medical attention. There are a lot of soldiers here.

Also holy to the Jews, this is the Santa Cruz of Israel. Nice weather, trees, artists, dogs. Highest elevated city. Many religious folks here. I find myself, again, somehow, hanging with Chabbad Hassidim on Shabbat. On August 9th we walk through the sacred cemetery and dip in the Ari’s Mikvah (ritual bathing area) to purify. The water is icy cold. See this link.

I didn’t spend much time here. I will need to come back here because there is a Kibbutz Library section here. The most industrial, and therefore the most polluted city. I don’t like it much. I do manaage to meet some fellow travelers here and we all come up with a plan to visit Dahab, Egypt together the next day. I’ve never been to Dahab before, no less Egypt, but I have been hearing good things about it from other traverlers. So we all decide to hop on the Eggged bus and hightale it down to Egypt. I guess we figure safety in numbers.

Today I arrived. This place truly is in the middle of nowhere. Kibbutz Ketura is located about 50 km north of Eilat. I am going to be spending the next part of my life here, and I have never been in a more remote spot. I have a good feeling of calmness about the whole area. Israelis spell it Qetura 30 km. To the west, a mere ¼ of a mile away are the Grand Canyon like mountains called the Negev Mountains. To the east, about 4 miles away are the mountains of Edom. They are in Jordan. Cool. I will be able to see Jordan every day. Israel and Jordan are at peace.

Israel and Egypt are at peace, as well. So it is a very calm area down here. Most people speak Hebrew around here, but they all seem to know English, and surprisingly, most seem to have English or American accents. I have relearned to read Hebrew but still don’t understand it. My Hebrew name is Gavriel (the angel.)

There is a strike going on today and my flight to London is canceIed. I am rebooked through Paris on Air France. When we arrive in Paris I am booked onto British Airlines flight 307 to Heathrow. In Heathrow I fly to LAX. It is an easy flight home.