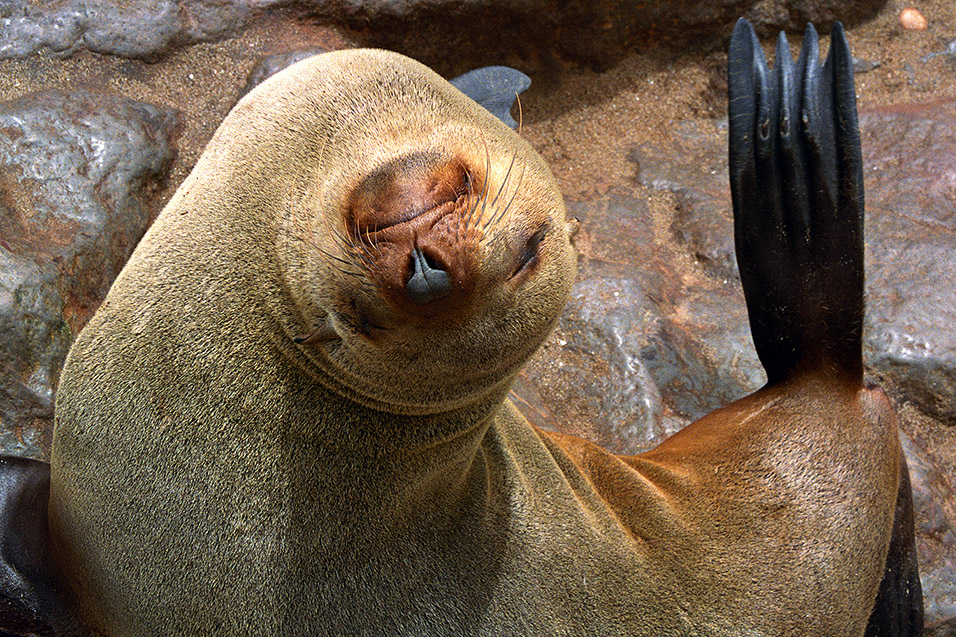 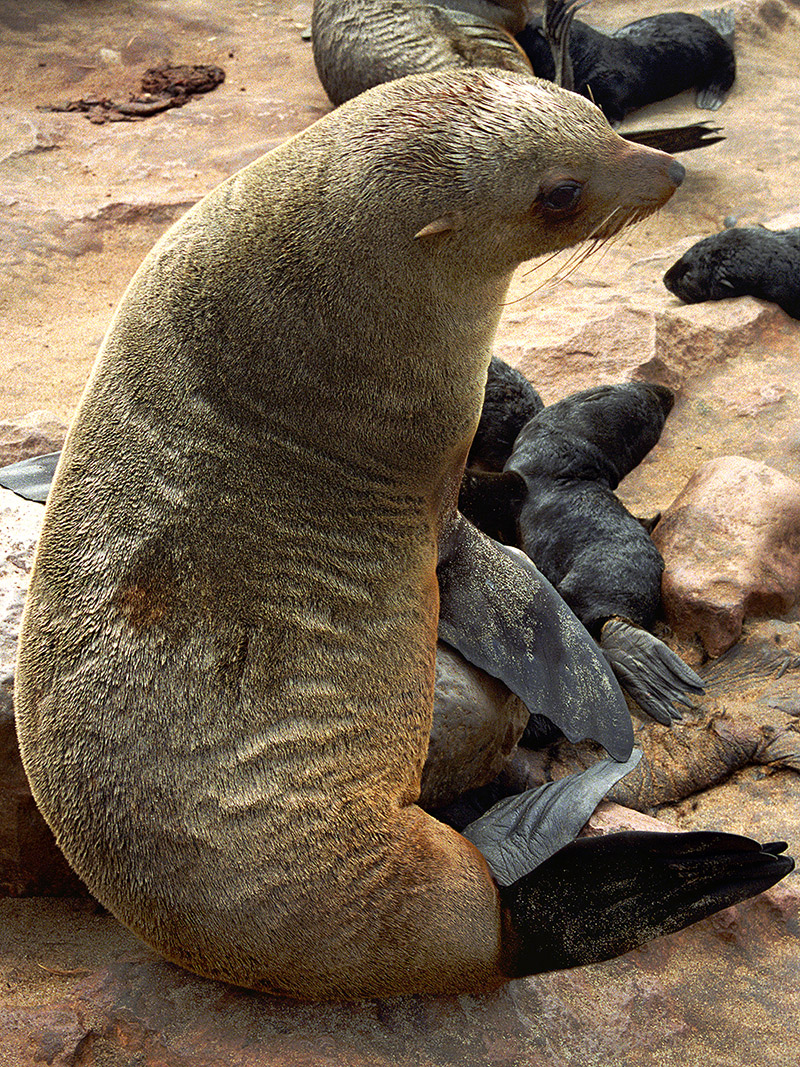 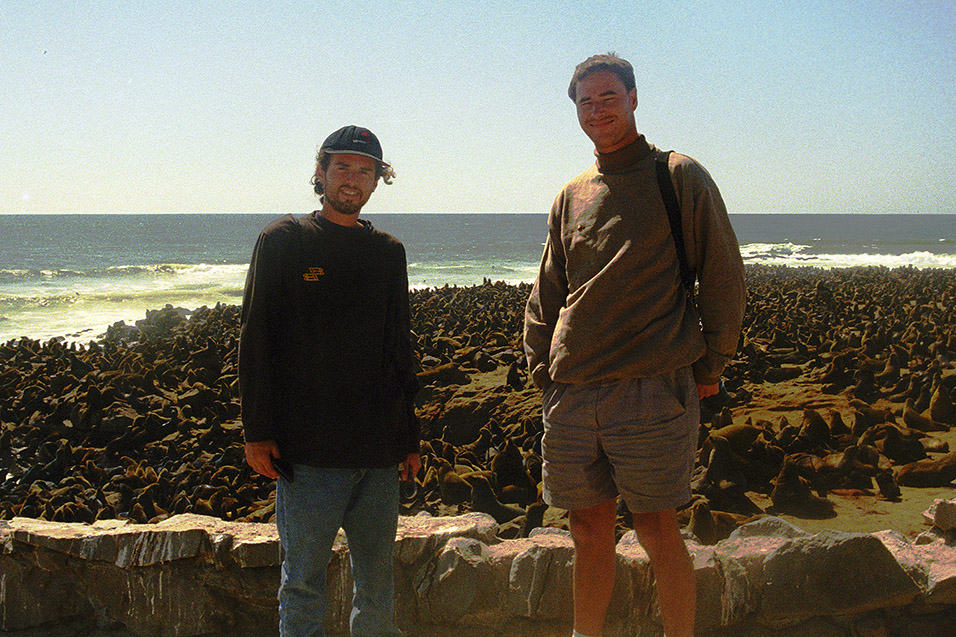 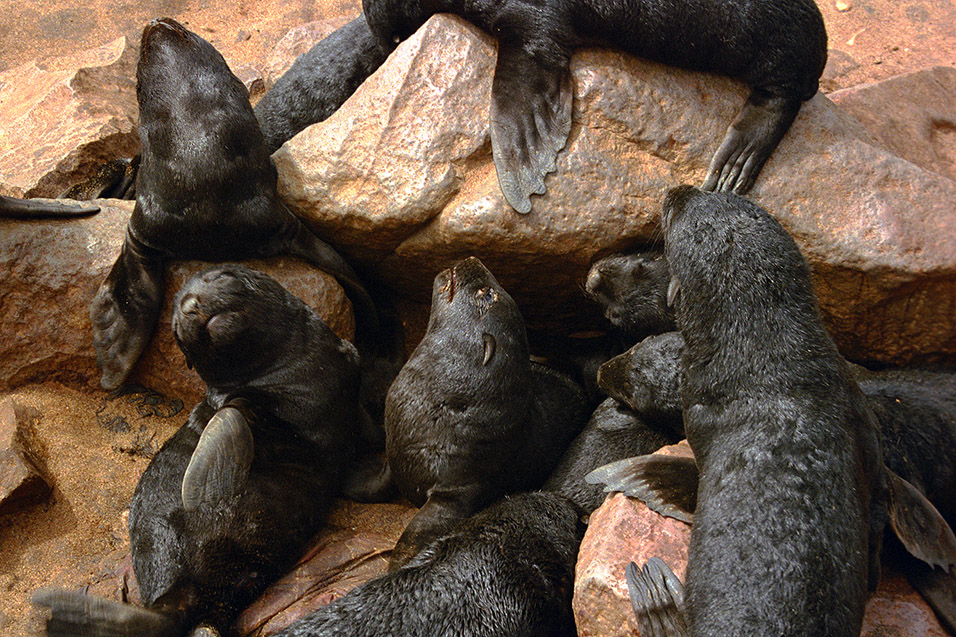 Most baby seals are born in November or December, and they weigh about 4.5 to 7 kg at birth. Their fur is pitch black and they start sucking on their mother immediately. They have a very strong mother-youngster relationship. A few days after giving a birth the mother has to return to the sea to feed. During this time the youngsters are very vulnerable and are hunted by jackals and hyenas. Other reasons for deaths are premature birth, injuries, drowning and starvation. 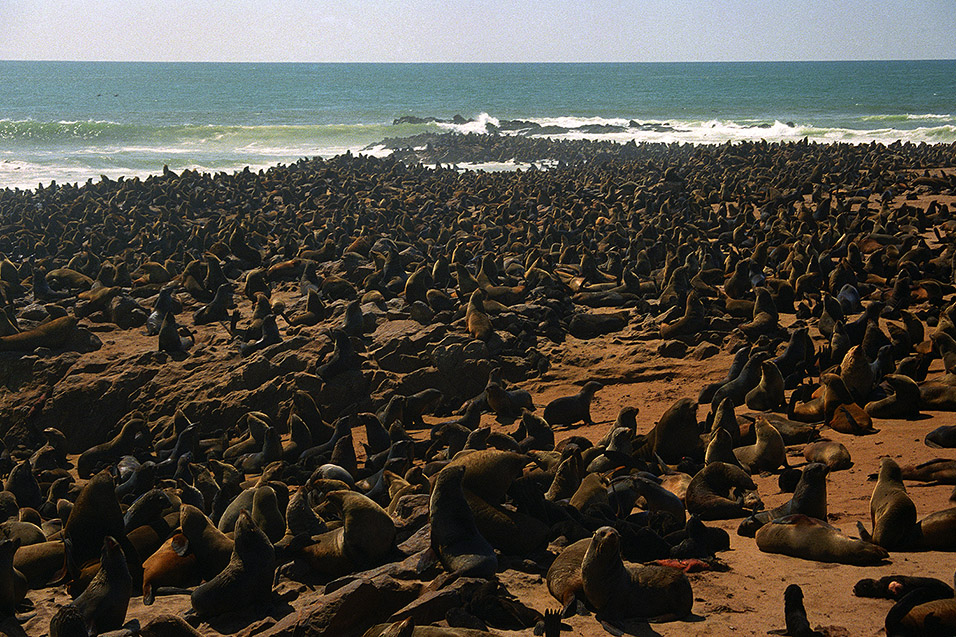 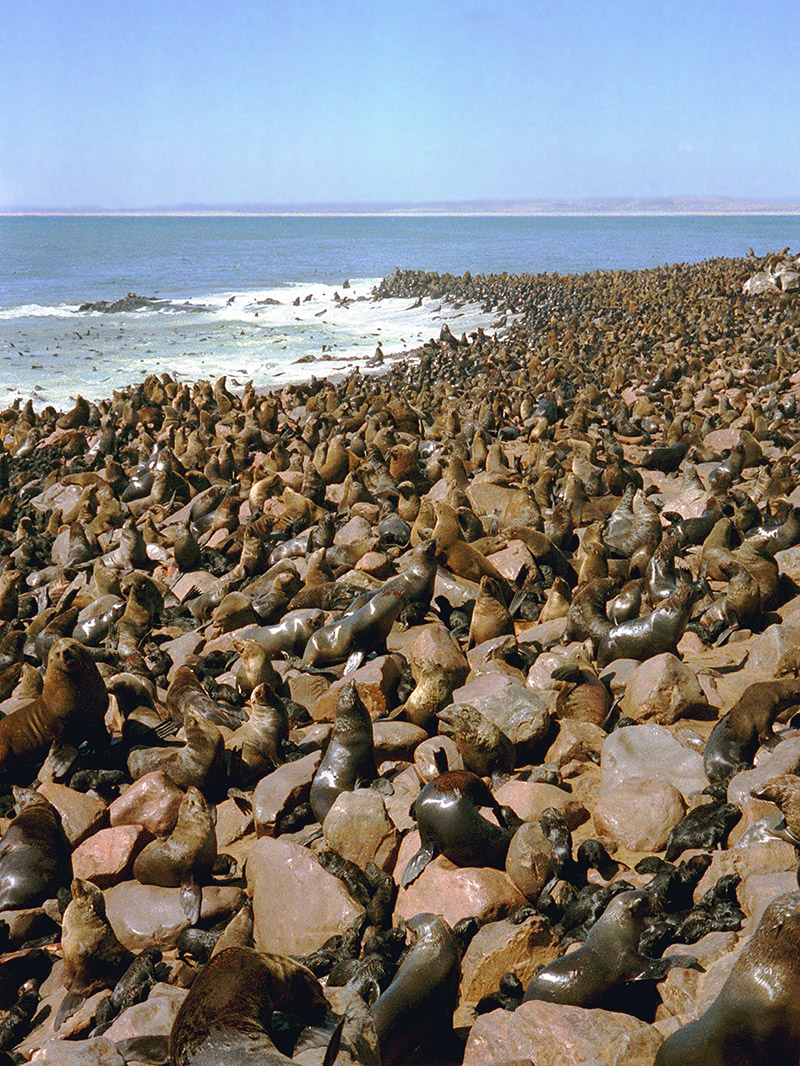 November and December is breeding season for the cape fur seal. During this time, populations can swell to 150,000 making Cape Cross one of the the largest seal colonies on Earth. 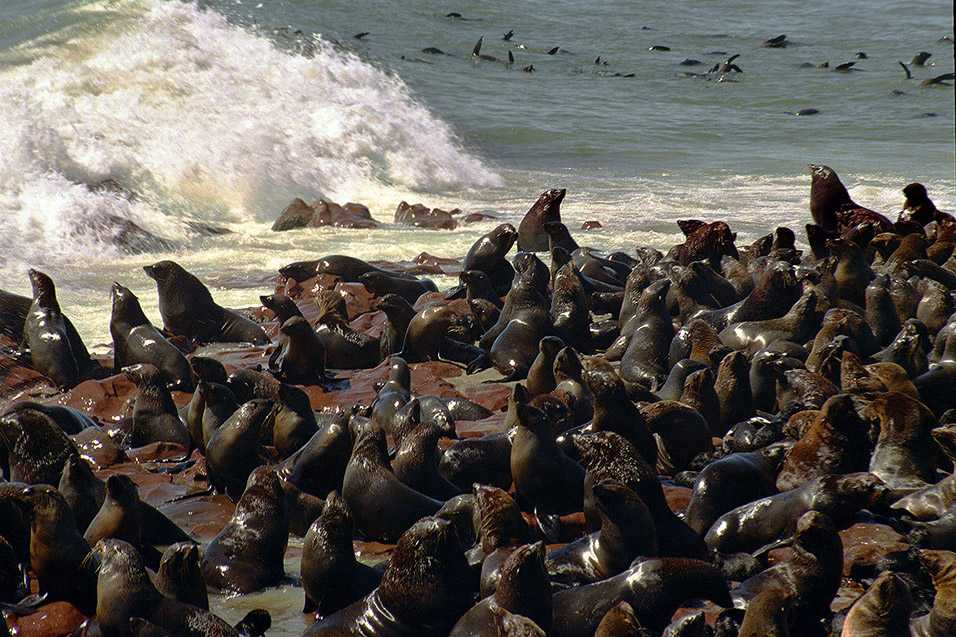 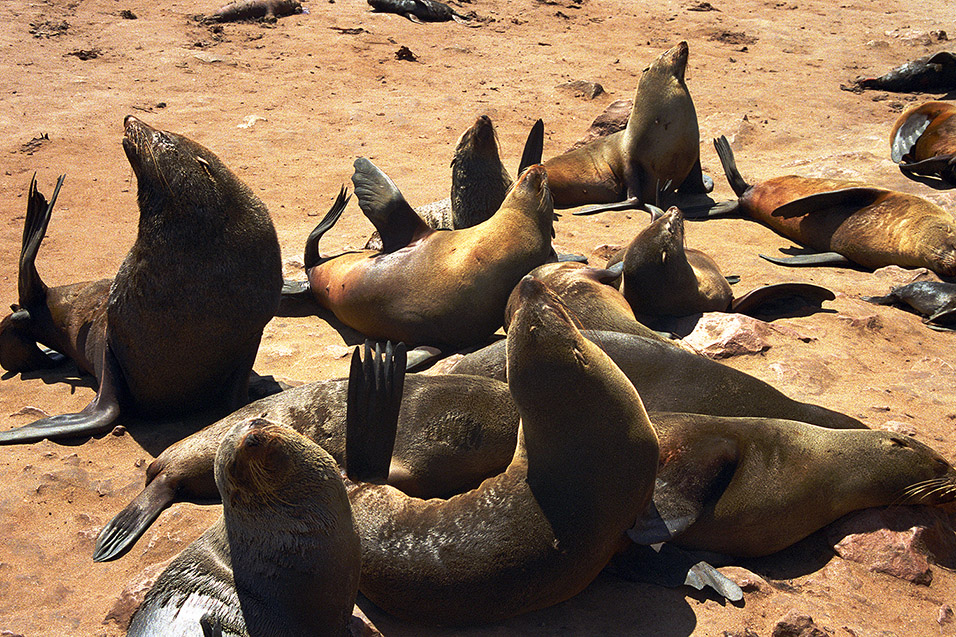 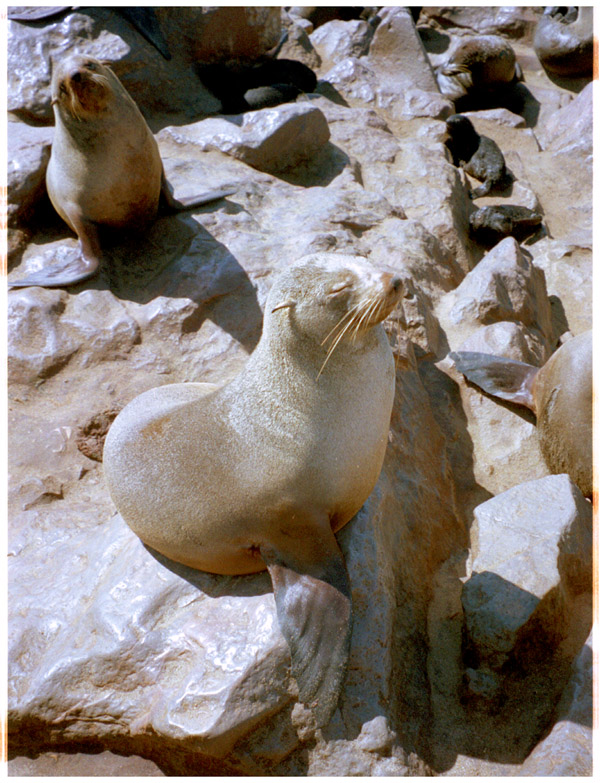 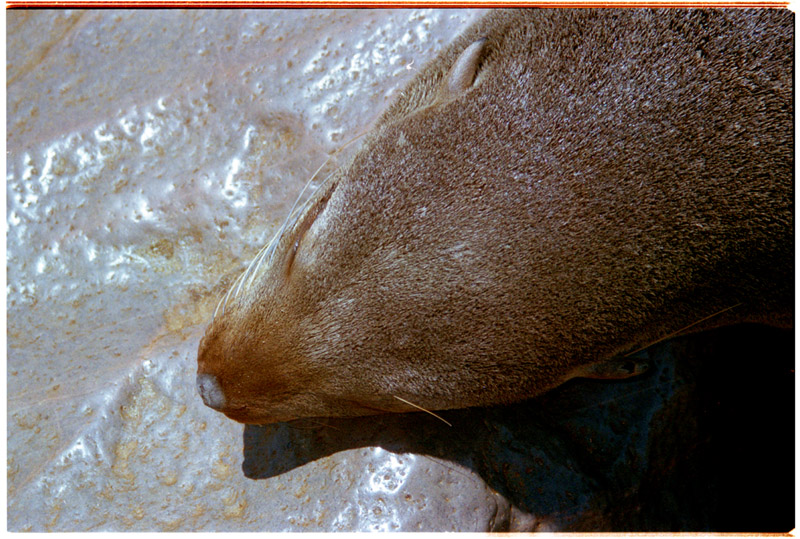 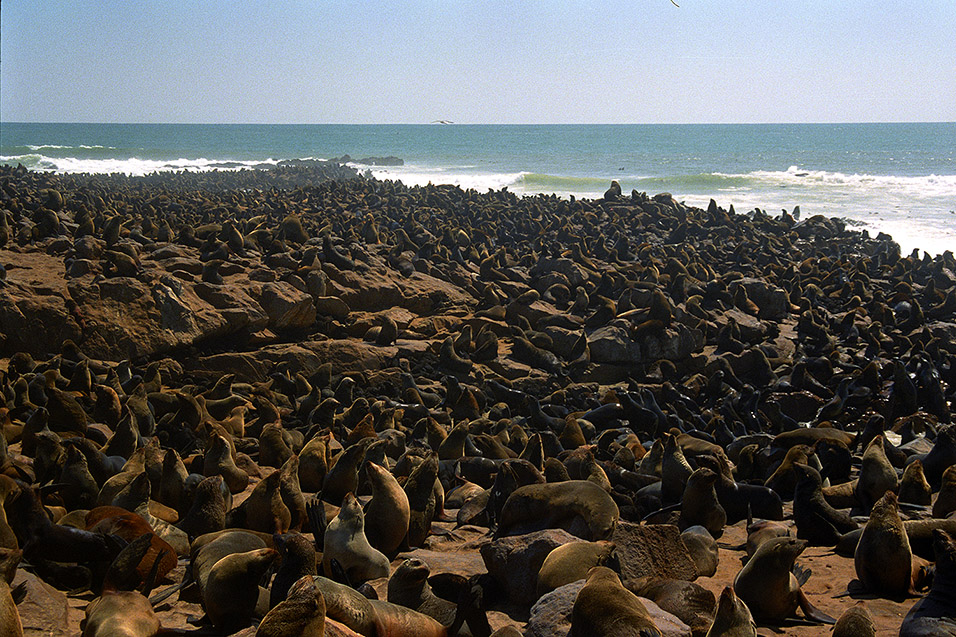 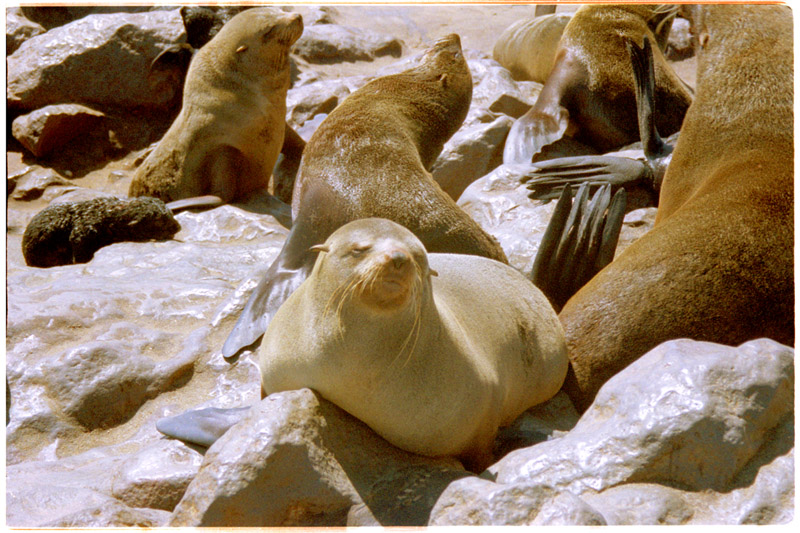 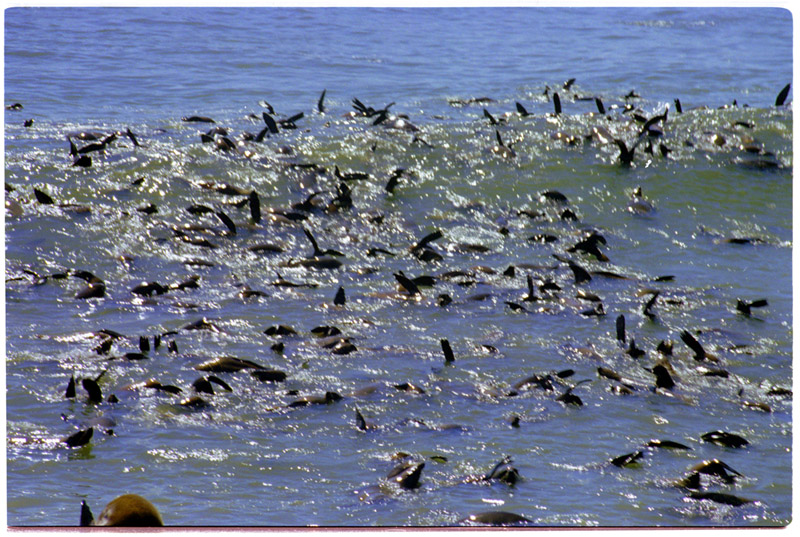 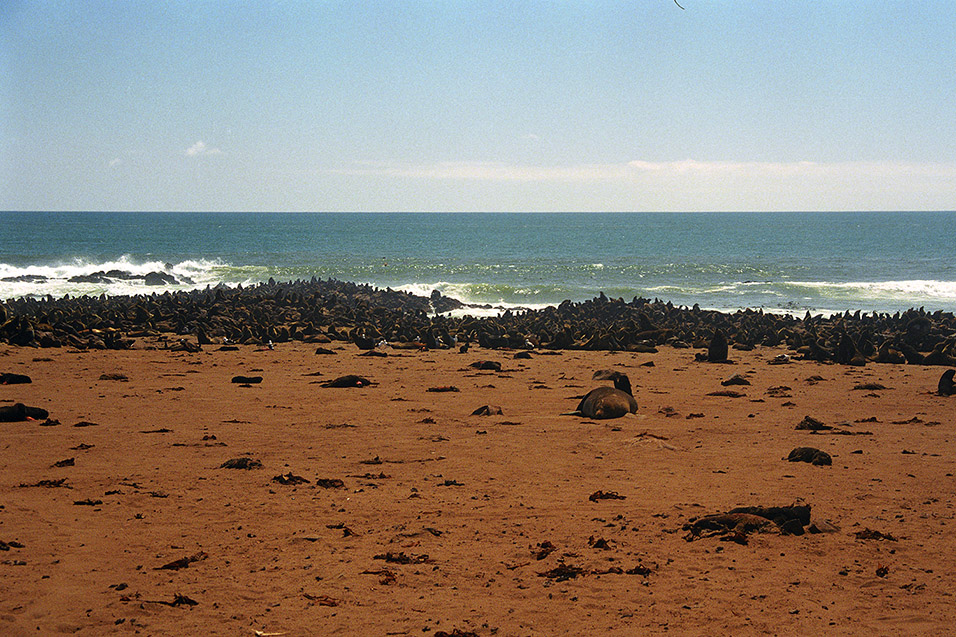 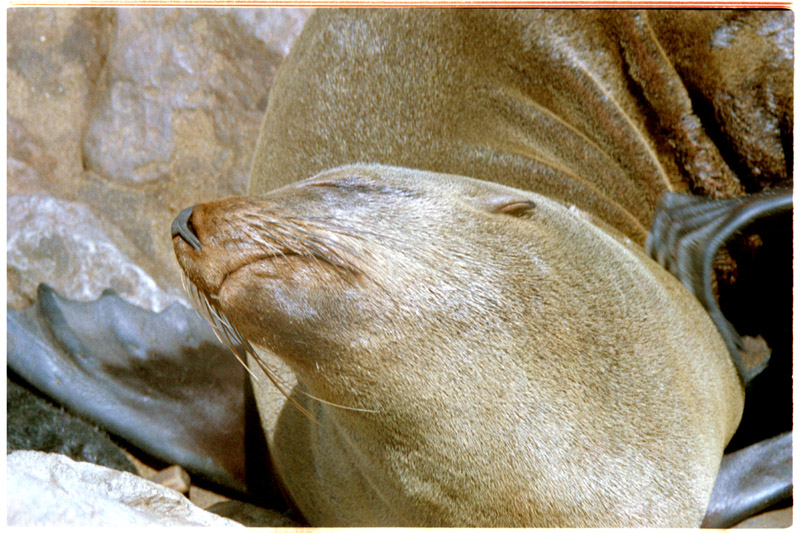 The desert that extends from the Namibian interior is a formidable place. Parched and inhospitable, the seemingly endless desert is the antithesis of Eden. Yet at the perimeter of this vast wasteland lies the Atlantic Ocean. And on the boundary between the two lies a small spit of land by the name of Cape Cross.

When you arrive at Cape Cross, for kilometers in every direction, it is difficult to find even a single strand of grass. But on the rocky shores of the sea, flung from the foamy breakers, lie a seething mass of life. Cape Cross is home to over 60,000 Cape Fur Seals. The seals live on a small peninsula, every centimeter of which seems inhabited by a stinking, barking, obdurate sea lion. The sheer number of seals is staggering. The beach is an undulating carpet of fur, the cacophony deafening.

There is a small reserve that allows visitors to come within a meter of the nearest seals. A low wall, less than a meter high, separates the visitors from the seals. In November, the seals give birth, and thousands of infants litter the beach. The mental image conjured up by the thought of thousands of cute seals, all with babies, lounging on a beach only meters from you, is romantic, even irresistible. But beware.

Cape Cross is a blueprint for natural selection and it is not pretty. In November, thousands of babies are born. And amongst this throng of infants, a mother seal will only nurse her own young. And the males? They don't seem to notice the existence of the pups. The result is a gut-wrenching display of nature's brutal worst.

When you exit your vehicle during calving season, ready to see fluffy pups wriggling in all of their infinite cuteness, you are pummeled with the horrific stench of rotting flesh intermingled with the aroma of seal droppings. The immediate reaction will be to wretch, and if you can control it, the urge will linger until you leave, and possibly well afterwards. The viewing area is a patch of sand, about 50 meters square, which is separated from the beach by a low wall. As you approach the wall the stench intensifies, the bellows of the seals grow louder. When you kneel at the wall in horror, you look out at 60,000 seals, all of whom are ignorant of the human feeling of compassion.

Most people are only able to linger at Cape Cross for less than an hour. They arrive expecting cute cuddliness. They leave having witnessed the ultimate in brutality and the most profound miracle on earth, the dawning of a new life. The feelings churn within, unable to reconcile themselves.

You arrive at the wall to a pile of corpses. They litter the beach, forgotten by their mothers. Jackals scurried amongst the dead, scavenging a meal. Pups bleated, abandoned, separated from their mothers, looking for a teat to suckle. Huge bulls strutted, wallowing on clumsy flippers, defending their territory. An intransigent bull would feign a charge, and his rival would bellow in fury, trampling pups to death, as his blubberous girth raged into battle. Pups, only minutes old, tried to suckle a female. She grabbed the orphan in her teeth, flinging him through the air to founder abandoned on the rocky shore.

But only two meters away from you a tawny female bellows, her head lifted to the heavens, and as blood squirts from beneath her a pup tumbles onto the beach. He looks up and you are the first thing he sees. It is a pricelessly rare experience, one afforded a person only a precious few times in life, if ever. And this is why we recommend Cape Cross. To see nature in its uncensored brutality, as Darwin envisioned it. But to temper it with the glorious miracle of birth.

Cape Cross is an easy day trip from Swakopmund. Take the road north from Swakopmund to Henties Bay. Continue north from mile 72 for about another 20. If you hit mile 108 you have gone too far. The turnoff is well posted. If you do not have a vehicle, inquire at your hostel about a tour to the site. Alternatively, ask fellow guests. It is often possible to hitch a ride to the site. Also, be confident that once you reach Cape Cross you will be able to hitch a ride back from fellow tourists, assuming you are an individual, in a very small group, or willing to split up.

There is no accommodation at Cape Cross. You should be able to camp for free along the beach, just choose a site well away from the road where you will not be seen by passing motorists.

There is a visitor's center at the site. They provide public restrooms and a simple snack bar. Park fees are minimal and should be less than $4.

Note: The stench of Cape Cross during pupping season is nearly unbearable. People with long hair will notice that the odor permeates their hair and will stink until washed. Everyone will notice that their clothing will have absorbed the stench and a change of clothes may very well be necessary.