The sun pokes rays through scattered clouds drizzling rain on the thirsty Kenyan earth below. The contrasting effect of cloud and sun is profound causing the vast veld to shimmer like diamonds. I am quite tranquil and relaxed, yet I am coherent enough to maneuver the 2-ton beast we call Breakfast.

We are heading towards the town of Eldoret to spend the evening watching the World Cup finals — France vs. Brazil. What a match it will be! I am driving and Greg is sitting shotgun; Todd and Nicole are hiding in the back, cuddled in the corner of a somewhat messy but functional Breakfast. Everything is running smoothly; all systems go. (A rarity, indeed.)

The road that we have been exploring all morning suddenly dips down in front, descending under the overpass of a perpendicular crossroad. As we reach the lowest section of the underpass I notice an accumulation of rain water that creates a shimmering pool over the whole road. This puddle can be blamed on rather poor Kenyan road engineering. I dismiss the murky pool as another obstacle on this East African motorway. Breakfast roars through the opaque brown puddle with spinning tyres spraying water everywhere.

As the road begins its ascent on the other side of the underpass, the back of Breakfast begins to slide and swivel. The water has causes our car’s bald tyres to lose traction, and Breakfast hydroplanes out of control on this already dodgy African highway. Fortunately, several months of African driving have given me the experience to handle these types of situations. I know just what to do in this situation. Relax, let off the accelerator, and let the car find an even keel on the road again.

This would have been a fine strategy had Breakfast not already slipped into the middle of the road and had there not been a car in the opposing lane heading right towards us. Bummer, I think, as I slam on the brakes in a desperate attempt to avoid a collision. “Hold on… . Oh my gosh! We are outta control!… ” I scream as the car enters its second 360 degree rotation.

Luckily we miss the oncoming traffic — by a hair. Breakfast stops spinning and ends up on the side of the road somehow missing a huge water drainage ditch that runs parallel to the road. We were all shaking. I sigh and tilt my head from side to side. I think it is all over.

I suddenly hear Todd, who is speechless through the entire ordeal, demand in a firm voice, “Reverse, reverse, reverse!” I look over my shoulder at the event causing Todd’s distress. On the road where we had just spun out is a loaded cargo lorry heading right for us. The driver of the large truck, in an attempt to miss our car, has hit his brakes. The trailer of the large rig is jackknifed in a most undesirable way. Now the sideways truck trailer is heading right toward us. Todd continues in a desperate plea, “Reverse, reverse!… ”

I turn the ignition key, but my attempts to revive the car come to no avail. Breakfast’s engine will not fire and I cannot reverse. The starter motor failed some months prior and has not worked since. An angle from heaven could no more fix the damn thing than the previous five or so African bush mechanics who attempted their magic upon it. Fortunately, fate is on our side. The slight slope which we are resting allows Breakfast to roll backwards away from the road when I let off the brakes. Inch by inch we edge away from the danger — slowly, but surely.

You can probably figure what happens next. Obviously, since I am writing this, the lorry misses us. If it had hit, we would all be casualties. The driver gains control of his massive truck and honks at us when he passes. We just sit in the car for some minutes contemplating the hair-raising events. “Todd,” I said, “I think it is time for some new tyres.” And thus begins the search for the new retreads. But that is another story…

And people often ask me what was the scariest thing that happened during my year in Africa. Of all the terrible things that could go wrong on an African adventure — thieves, disease, corruption — isn’t it ironic that this is the story that I tell? 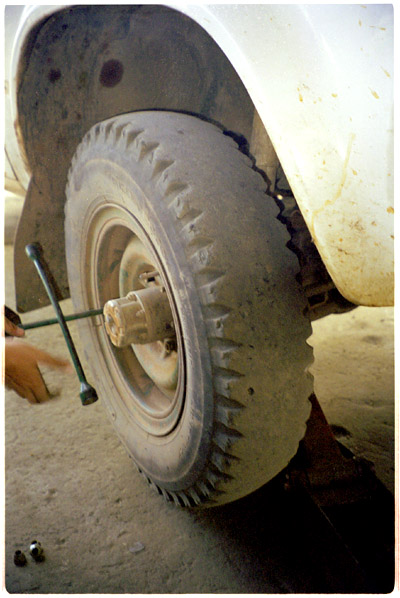 Old tyres with no tread 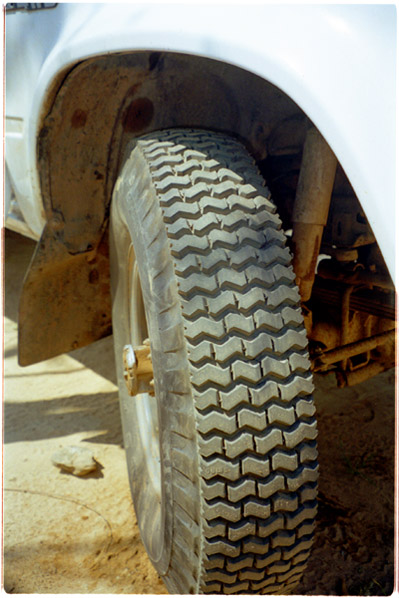